Kangana Ranaut Latest Photos: Actress Kangana Ranaut has been in the news recently over a lot of controversies. However, now Kangana has done something that is quite different and she has shared it all through her Instagram photo.. 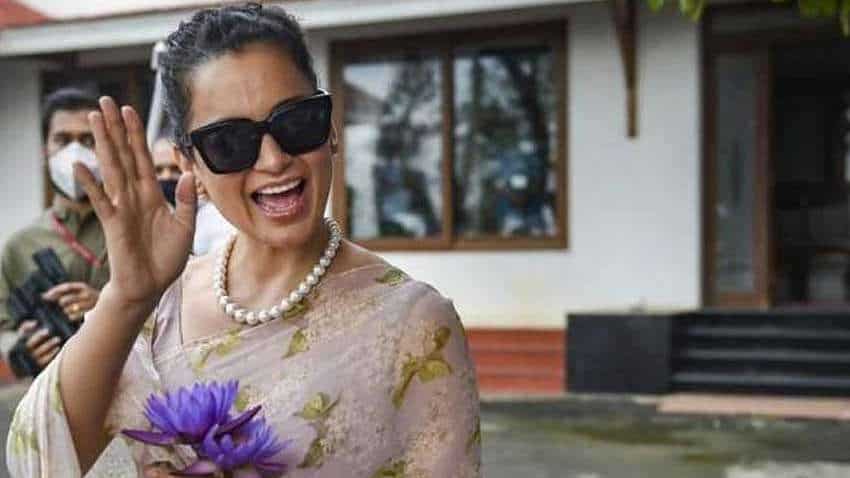 Kangana Ranaut latest photo: The picture that Ranaut shared on Instagram, which looks like having been taken at her brother Aksht's marriage in Udaipur, shows her kissing Prithviraj on his lips. Reuters
Written By: ZeeBiz WebTeam
RELATED NEWS

Kangana Ranaut Latest Photos:Actress Kangana Ranaut has been in the news recently over a lot of controversies. The Bollywood actress has not hesitated to air her strong views on the film industry, politics, society and much more. However, now she has done something that is quite different. Kangana Ranaut has never hesitated to step into the most controversial of happenings and added more fuel to the fire. It is no wonder then that she has hogged all the attention and it is unlikely that will cease anytime soon considering her combative nature. However, Kangana Ranaut is not all about berating people who she thinks have done wrong. In fact, quite to the contrary. She has a very soft corner too and that has emerged recently at the wedding of her brother where she was seen having the time of her life, dancing away merrily among the gathered relatives and friends. But that is not what this is all about. We are talking about an adorable kissing photo of Kangana Ranaut that will melt your heart.

To the recent feelgood effect around her, Kangana Ranaut has added yet another one. This time, the person at the end of her love is her little nephew! It all happened when her cute nephew, Prithviraj by name, asked Kangana not to leave for a movie shooting. What the actress did then was to persuade her nephew with tenderness and care and it was his reaction that brought tears into Kangana's eyes. The moment was captured on a photo and has been shared by Kangana Ranaut on Instagram.

The picture that Kangana Ranaut shared on Instagram, which looks like having been taken at her brother Aksht's marriage in Udaipur, shows her kissing Prithviraj on his lips.

Kangana Ranaut captioned the Instagram photo: "When we left for the shoot, he said don't go, I insisted I need to work, he looked thoughtful and immediately sat in my lap and said smilingly....ok you go but let me sit with you for two mins.... still get tears thinking about his face."

Kangana Ranaut's strong bond with her sister Rangoli is another facet that the actress has brought to the fore in public sphere.

On the career front, Kangana Ranaut has a movie to complete called "Thalaivi" and she has a tight schedule to adhere to. This is a bilingual biopic of the iconic late Tamil Nadu chief minister Jayalalithaa. Thalaivi traces Jayalalithaa's journey from the time she was a top actress to how she entered politics and then dominated it. Director of Thalaivi is AL Vijay. The movie also has Arvind Swami, Prakash Raj, Madhoo and Bhagyashree.

Kangana Ranaut has other movies in the works too. Amongst them is Dhaakad and Tejas.

Every Rohingya protected by Owaisi will be removed: Tejasvi Surya

My kick-arounds with Diego Maradona in Cuba