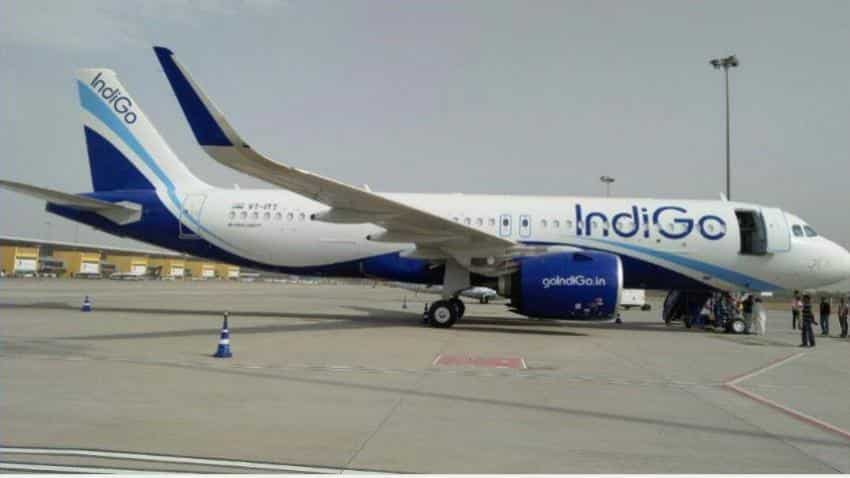 IndiGo share price rose as much as 2.4 per cent to Rs 1248.70. Image source: Twitter
Written By: ZeeBiz WebTeam
RELATED NEWS

IndiGo hiked ticket prices and the market reaction was quite positive, even though it would mean spoiling the summer vacations of many families who would find the new rates prohibitive. However, stock markets welcomed this step by IndiGo with  thunderous applause. The airliner's stock gained over 2 per cent on Wednesday. The country's largest airline has announced that it will levy fuel surcharge of between Rs 200 and Rs 400 per passenger on domestic routes to offset rising oil prices, a move that will increase airfares. With this, IndiGo has become the first local carrier to announce passing on the burden of spiralling jet fuel prices to the passengers.

"In the wake of a sharp uptick in the price of oil and the cost of Aviation Turbine Fuel (ATF), it has been decided to re-introduce fuel surcharges effective May 30," IndiGo said in a release.

"A marginal increase in airfares in the form of fuel surcharge will not have any significant adverse impact on the air-traffic demand," the release said.

Aircraft fuel expenses account for around 40 per cent of the airline's operational costs, making it the single largest item of its total expenses.

"Furthermore, the depreciating Indian rupee is an additional cost burden on the Indian carriers. Given this scenario for a low-cost airline, levying a surcharge has become inevitable," the airline said.

The airline also said that it would review the surcharge in the light of oil prices going forward, and endeavours to be in a position to withdraw it once oil prices have moderated.

"with ATF prices in India having risen around 25 per cent in the current month compared to the same period last year, the airline is compelled to pass some of the increased cost burden to customers as a fuel surcharge," said IndiGo's Chief Commercial Officer Sanjay Kumar.

"In the context of the past decade, where airfares in India have reduced by nearly 50 per cent in real terms (i.E. Adjusted for inflation), we are confident that this marginal increase in the form of fuel surcharge will not have any significant adverse impact on demand," he noted.

"We are hopeful that the 1.5 lakh plus passengers flying with IndiGo each day will continue giving us support," Kumar said.