Film trade analyst Sumit Kadel has said Thackeray collection has got a good number of screens and this boost will ensure a decent opening. 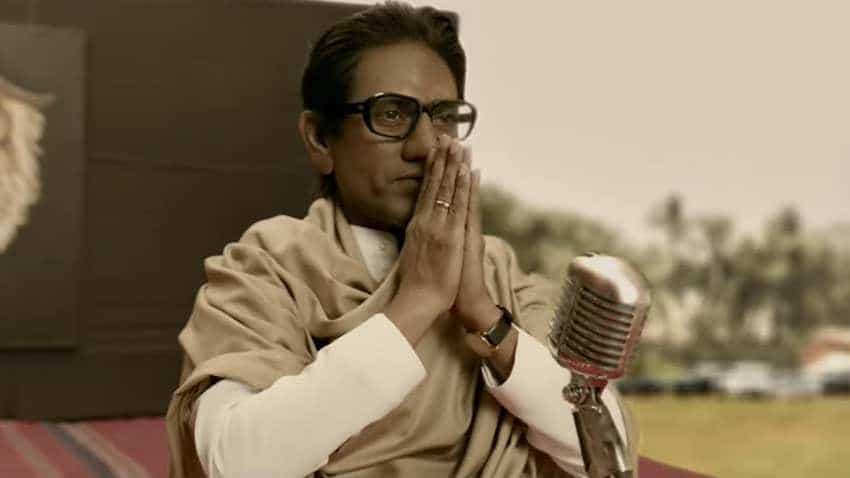 As far as Thackeray box office collection is concerned, then film critic and trade analyst Akshaye Rathi revealed that the film may earn around Rs 3 to Rs 3.5 crore on day 1.

Thackeray Box Office Collection day 1: Abhijit Panse directed Thackeray, which is based on the life of Shiv Sena founder Bal Thackeray, has been released today. The film stars Nawazuddin Siddiqui and Amrita Rao in lead roles. Thackeray film has impressed critics and it has already created a buzz among movie lovers. Thackeray has been produced with a budget of around Rs 20 crore. Film trade analysts are hopeful that it will start day 1 with a decent box office collection and first reports are indicating that too.

As far as Thackeray collection is concerned, then film critic and trade analyst Akshaye Rathi revealed that the film may earn around Rs 3 to Rs 3.5 crore on day 1. "Thackeray film has created a terrific buzz in Maharashtra. Both the Hindi and Marathi versions have generated very good anticipation in the public. With regards to the business of the film in India, Maharashtra is going to be the engine. I won't be surprised if the film manages to earn Rs 3-Rs 3.5 crore on day 1," said Rathi.

Another film trade analyst Sumit Kadel has said Thackeray collection has got a good number of screens and this boost will ensure a decent opening.

"Thackeray has logged an occupancy rate of around 7-8 per cent in areas other than Maharashtra. In the Maratha region, the occupancy was around 35-40 per cent in early morning shows and is set to improve in a major manner as the day progresses," said Kadel.

Kadel also said that the film may earn around Rs 3.5-4 crore.

Thackeray movie is a biopic of firebrand leader Balasaheb Thackeray who had a cult following. The film is the story of Balasaheb Thackeray's courage, wisdom and his journey from a journalist to a mass leader. Given the long weekend, with Friday being a holiday on account of Republic Day, the film is expected to display a powerful performance at the box office.

Film trade analysts hinted that the Nawazuddin Siddiqui starrer's actual earning may well throw a big surprise. It can be high above its first-day collection expectations. In fact, they say, don't be surprised if Thackeray throws a handsome and unpredictable day 1 final collection total when the numbers come out tomorrow.