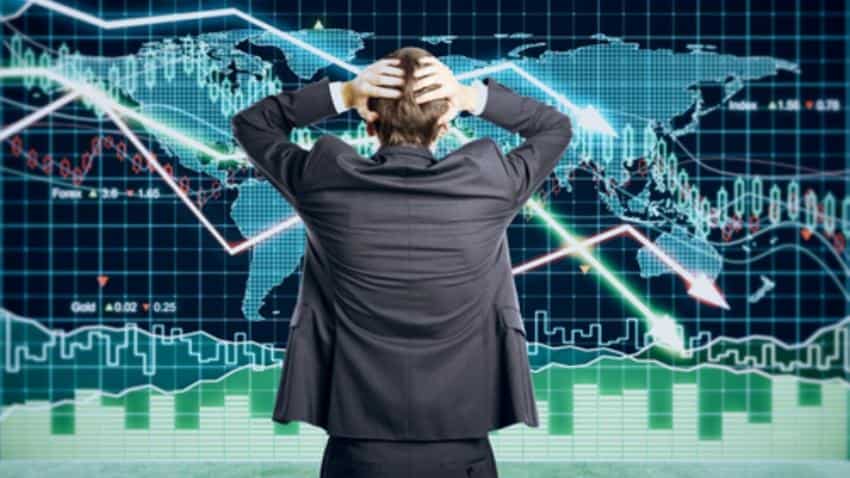 All the stocks on Sensex and Nifty were trading in red with Tata Motors (down 7 per cent) declining the most. Image source: Reuters
Written By: ZeeBiz WebTeam
RELATED NEWS

The S&P BSE Sensex cracked over 1200 points at open on Tuesday, while the Nifty50 dipped below 10,300, falling for sixth straight session after Wall Street suffered its biggest decline since 2011 as investors’ faith in factors underpinning a bull run in markets began to crumble.

In the broader market, BSE Midcap and the BSE Smallcap indices underperformed to tank over 4 per cent each.

Nifty Realty (down 5 per cent) was the leading loser among NSE indices. Nifty Metal, Nifty Auto and Nifty PSU Bank dipped over 4 per cent, while Nifty Bank was down 3 per cent.

All the stocks on Sensex and Nifty were trading in red with Tata Motors (down 7 per cent) declining the most post its December quarter numbers.

The Reserve Bank of India (RBI) is likely to keep its policy rate on hold tomorrow, when it concludes its two-day policy meeting that begins today. The RBI is expected to toughen its warnings against inflation, economists say, laying the ground for a hike in 2018 after prices accelerated at the fastest pace in 17 months.

"We continue to expect the RBI to persist with its slightly hawkish pause in its Wednesday policy, from February, to err on the side of caution... markets will look to the RBI policy on Wednesday for confidence building measures. On balance, we expect the RBI to cut 25bp in August if the La Nina dampens agflation," said global brokerage firm BofA-ML.

US stocks plunged in highly volatile trading, with both the S&P 500 and Dow Industrials indices slumping more than 4.0 per cent, as the Dow notched its biggest intraday decline in history with a nearly 1,600-point drop and Wall Street erased its gains for the year.

MSCI’s broadest index of Asia-Pacific shares outside Japan dropped 2.8 per cent to one-month low, which would be its biggest fall in more than a year and a half, a day after it had fallen 1.6 per cent.

The trigger for the sell-off was a sharp rise in US bond yields following Friday’s data that showed US wages increasing at the fastest pace since 2009, raising the alarm about higher inflation and with it potentially higher interest rates.