The flood situation in parts of Telangana and Karnataka remained grim on Sunday as overnight spell of rains in Hyderabad battered the city yet again while the Army was pressed into service in four affected districts in Karnataka. 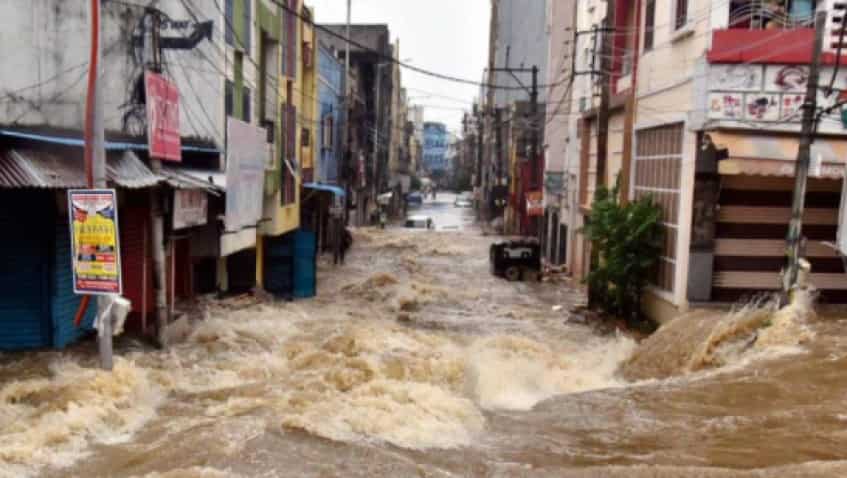 Telangana, Karnataka rain: The flood situation in parts of Telangana and Karnataka remained grim on Sunday as overnight spell of rains in Hyderabad battered the city yet again while the Army was pressed into service in four affected districts in Karnataka.

The Telangana capital had witnessed one of the worst deluges in recent times following unprecedented downpour in over a century early this week, with about 20 cm of rains being recorded in the city and its surrounding areas.

The flood situation in Karnataka was equally a matter of concern in four districts with Krishna and Bhima rivers in spate as the Army, the national and state disaster response forces undertook rescue work, evacuating hundreds of marooned people, officials said.

In Hyderabad, rains since Saturday evening led to lakes and other water bodies overflowing with the water inundating several low-lying areas, including parts of the city affected last week, here and the outskirts, police and civic officials said.

A total of 37,409 families were affected in various localities that were inundated in the city due to the recent floods and ration kits and blankets were being distributed among them, a release from Greater Hyderabad Municipal Corporation (GHMC) said.

At least three people, including two children died in rain-related incidents reported from different parts of the city over the past 24 hours here, police and civic officials said.

The state capital bore the brunt as a depression dumped the heaviest rains (nearly 20 cm) since 1916 for October on Tuesday and triggered flash floods.

The rains abated since Wednesday with the flood water receding in most parts while the government in a preliminary estimate had pegged the losses at over Rs 5,000 crore.

However, since Saturday night several parts of the city and neighbouring districts again were battered by torrential rains with Saroornagar in adjoining Rangareddy district recording the maximum of 16.9 cm while Hyderabad Airport registered 7.2 cm.

In view of forecast of heavy rains, as a precautionary measure citizens staying in low lying areas were being evacuated, GHMC officials said.
Special drive on demolition of dilapidated structures continued by GHMC officials and citizens living in such structures were requested to vacate the buildings voluntarily to protect their lives from danger of collapse and cooperate with it in taking further action.

In Karnataka, which has been witnessing the monsoon fury for the past few days, many villages in Kalaburagi, Yadgir, Vijayapura and Raichur districts were either completely or partially submerged due to floods caused by heavy rains last week, Chief Minister BS Yediyurappa said.
He would undertake an aerial survey of the affected areas on October 21.

According to the Karnataka Disaster Management Authority (KDMA), a total of 20,269 people, including 15,078 in badly-hit Kalaburgi, have been evacuated so far by the personnel of the Army, the National Disaster Response Force (NDRF) and the State Disaster Response Force (SDRF) besides local police and district authorities.
There was no loss to human lives anywhere in the flood- hit areas whereas two cattle died in Vijayapura, KDMA Commissioner Manoj Rajan said.

"Two NDRF, one SDRF and one Army column have been deployed in Kalaburagi while two Indian Air Force helicopters are on standby. Similarly, the NDRF and the Army personnel are deployed in other three districts. Situation is under control," Rajan told PTI.
Yediyurappa said the floods have also resulted in damage to the crops.

Bhima, the major tributary of Krishna, has been in spate for the past one week due to heavy rains in neighbouring Maharashtra and in parts of Karnataka.

The river was flowing 4.45 metres above the danger level and 1.61 metres above its previous Highest Flood Level, the Central Water Commission in an update said.

xpressing solidarity with the flood-hit people, Prime Minister Narendra Modi has assured the state of cooperation from the Centre.
See Zee Business Live TV Streaming Below:

This is the third time Karnataka has been hit by floods in the past three months following heavy monsoon rains.