Senior BJP leader and Member of Parliament from Lucknow, Rajnath Singh has been appointed as the Defence Minister in the second tenure of the government led by Prime Minister Narendra Modi. 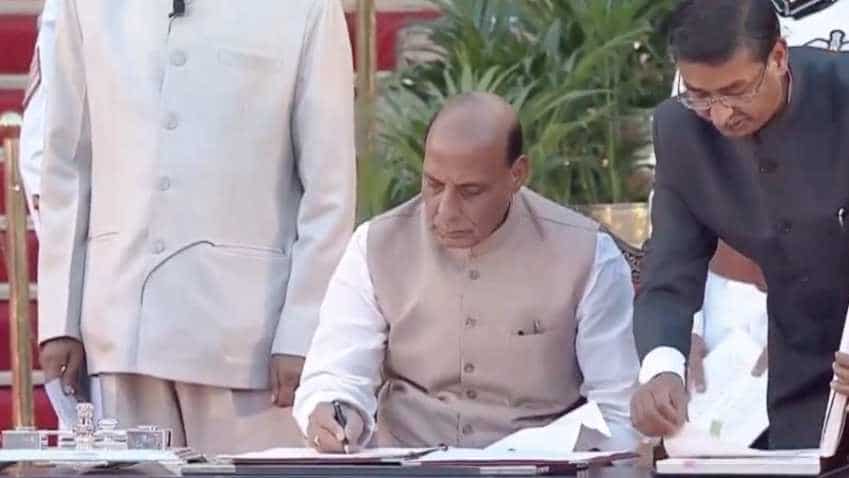 Senior BJP leader and Member of Parliament from Lucknow, Rajnath Singh has been appointed as the Defence Minister in the second tenure of the government led by Prime Minister Narendra Modi. In the first term, Singh was the Home Minister. The Ministry of Home Affairs will now be helmed by Amit Shah, who has been moved from the BJP into the government. The BJP is likely to appoint a new president soon. Singh is a former RSS activist. He is popular in the BJP ranks and once headed the party before it was handed over to Amit Shah. Rajnath Singh is known as an amiable politician. He is said to have friends in almost all political parties. During his tenure as the Union Home Minister between 2014-2019, the Centre launched a major crackdown on the Maoists and other insurgents. Singh had given a free hand to the National Investigation Agency (NIA) to take into custody several key separatist leaders in Jammu and Kashmir.

Singh was born on July 10, 1951, into a farmer's family in then Varanasi's Babhora village. Varanasi parliamentary constituency is represented by PM Narendra Modi.

Singh joined the Rashtriya Swayamsewak Sangh (RSS) in 1964 at the age of 13. He remained with the RSS even while serving as a lecturer in the K.B. Post Graduate College at Mirzapur, Uttar Pradesh. Singh had started his political career as Organisational Secretary of Akhil Bharatiya Vidyarthi Parishad`s (ABVP) Gorakhpur division, holding the post from 1969 to 1971.

In 1972, Singh was appointed the RSS General Secretary of Mirzapur and then entered active politics in 1974. He was a key figure in the JP Movement that shook then Prime Minister Indira Gandhi.

Singh was first elected as an MLA in Uttar Pradesh in 1977. He became a member of the Rajya Sabha in 1994 and the Chief Whip of the party in the Upper House. On November 22, 1999, Singh joined the then Atal Bihari Vajpayee government as the Union Surface Transport Minister. In the period, Singh is credited with starting the National Highway Development Programme, one of the dream projects of Vajpayee.

Singh also became the Uttar Pradesh Chief Minister from 2000. After two years, he served as the Agriculture Minister in Vajpayee`s Cabinet between 2003 and 2004.