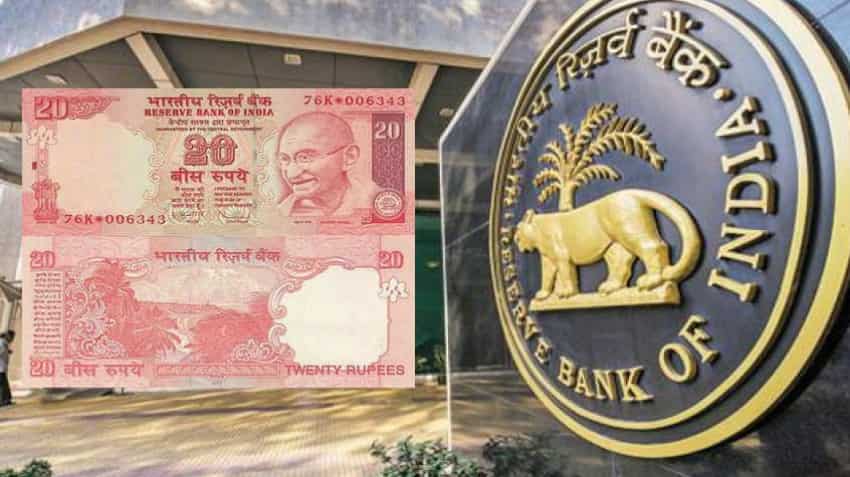 This new Rs 20 can be a reality in the upcoming year 2019. Photo: Reuters
Written By: ZeeBiz WebTeam
RELATED NEWS

India is soon to see a new currency note again! This time it would be Rs 20 banknote which will be circulated with enhanced features in the country. It needs to be noted that, Rs 20 was the only currency left out for a new makeover by RBI, when the central bank was busy upgrading new Rs 10, Rs 100, Rs 50 and Rs 500. Since November 2016, India’s currency chest has witnessed makeover with two new addition of Rs 200 and Rs 2,000. According to a PTI report citing a document of the central bank, the RBI will soon introduce a new Rs 20 currency note with additional features.

Let's have an understanding of the current Rs 20 which is available with Indians.

1. See Through Register: The floral design printed both on the front (hollow) and back (filled up) in the middle of the vertical band next to the watermark window has the denominational numeral '20'. Half the numeral is printed on the obverse and half on the reverse. Both printed portions have an accurate back to back registration so that the numeral appears as one when viewed against light.

2. Identification Mark: A rectangle with improved intaglio print that helps the visually impaired to identify the denomination.

3. Watermark: The portrait of Mahatma Gandhi, the multi directional lines and an electrolyte mark showing the denominational numeral 20 appear in this section and these can be viewed better when the banknote is held against light.

4. Intaglio Printing: The portrait of Mahatma Gandhi, the Reserve Bank seal guarantee and promise clause, Ashoka Pillar emblem on the left, RBI governor's signature on the banknote and the identification mark for the visually impaired persons are printed in intaglio i.e, in raised prints which can be felt by touch.

5. Latent Image: The vertical band contains latent image showing the numeral 20 when the banknote is held horizontaly at eye level.

6. Microlettering: The letters 'RBI' and the numeral '20' can be viewed with the help of a magnifying glass in the zone between the Mahatma Gandhi portrait and the vertical band.

7. Security Thread: 1.4mm wide security thread with inscriptions 'भारत" and RBI. The thread flouresces in yellow on both sides under ultraviolet light. The thread is visible as a continuous line from behind when held up against light. 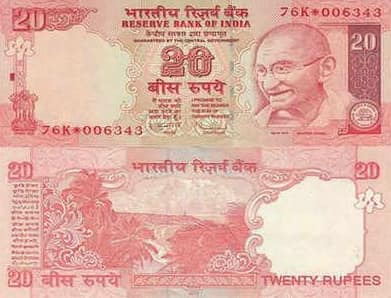 1. Year of printing appears on the reverse of the banknote.

2. Number panels of the banknote are printed in fluorescent ink. The banknote has optical fibres. Both can be seen when the banknote is viewed under ultraviolet light.

3. Banknote is printed on special watermarked paper with substrate cotton and cotton rag. This gives the banknote a unique feel and crackling sound.

However, there was not much mentioned in the report to how the new Rs 20 will look like. But one can expect this banknote to have a makeover like the ones made in Rs 10, Rs 50, Rs 100. Rs 200, Rs 500 and Rs 2000. Except numeral, motif, color and size these banknotes which have received makeover are almost similar.