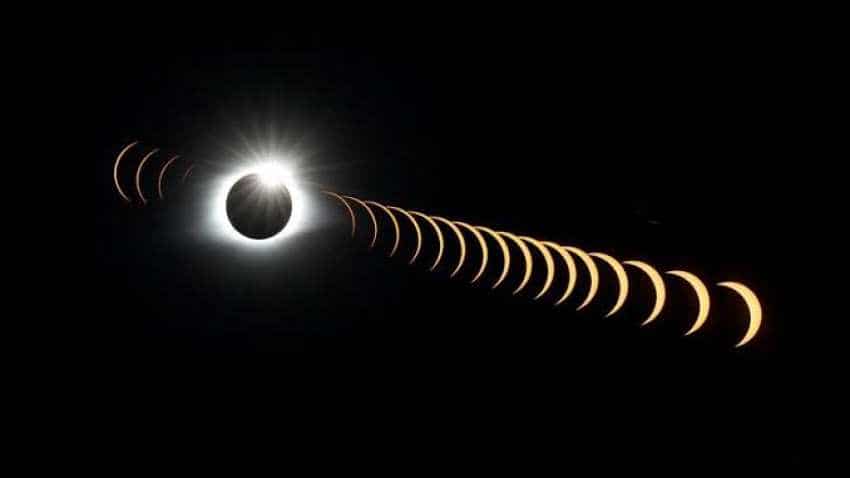 The last solar eclipse of 2019 will be seen on 26th December, Photo: Reuters
Written By: ZeeBiz WebTeam
Edited By: Harish Dugh
RELATED NEWS

Solar eclipse November 2019: The last solar eclipse of 2019 will be seen on 26th December. As per the reports, this solar eclipse will be a complete solar eclipse, which can be seen in India. A solar eclipse occurs when the moon passes between the earth and the sun hiding the sun partially or fully for a very brief period when seen from the earth. The solar eclipse in December 2019 will start from 8.17 am to 10.57 am and last as long as 2 hours 40 minutes. So, those who do miss the start can actually catch some parts of it. Needless to say, the spectacle is awesome and is a must-watch for all, especially for children. However, people should protect their eyes as it can be extremely harmful.

Best place to see the eclipse in India:
Tamil Nadu and Kerala will have the grandest view. The longest duration of annularity will be 3 minutes. In Tamil Nadu, you can see the annularity for 3 minutes 11 seconds in Tiruppur and for 3 minutes and 15 seconds in Ammapattinam on the east coast.

The annularity will last for 3 minutes in Ooty and since it is a hill station with an altitude of 2200 meters, this location will lead to the best view of the solar eclipse without being obstructed by the clouds.

What is solar eclipse?
In this astronomical position, the Sun, Moon and Earth all fall in the same straight line. As the Earth rotates on its axis, it also revolves around the Sun. On the other hand, the Moon is actually the Earth's satellite. So, when the Moon comes between the Earth and the Sun, the latter disappears behind the lunar surface. This event is called a solar eclipse.
Notably, the solar eclipse happens on new moon day, even as the lunar eclipse comes to pass on full moon day.