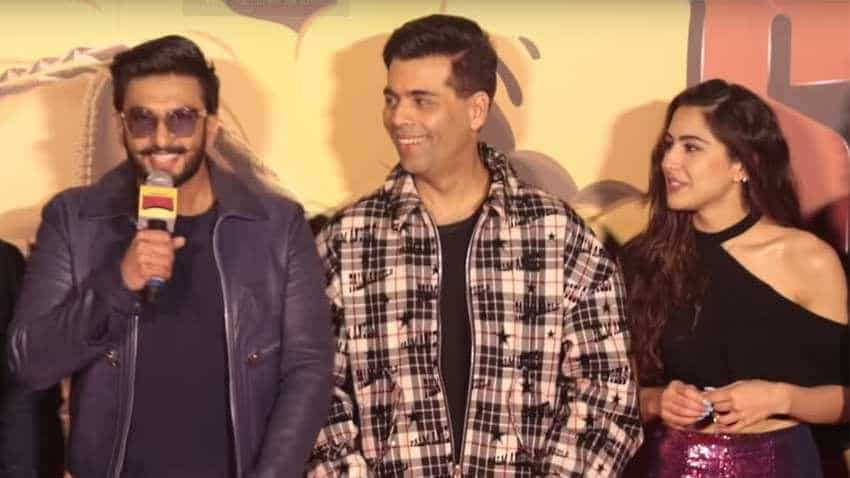 Simmba Box Office Collection day 1: Simmba collection direction will be clear from day 1 onwards and as per movie reviews, the film is set to be a rip-roaring success!
Written By: ZeeBiz WebTeam
RELATED NEWS

Starring Ranveer Singh, Sara Ali Khan, Sonu Sood, Ajay Devgan, and Ashutosh Rana, Simmba has been released today. The film has so far received good response from the critics and audiences. Here are five reasons why the movie may do well on the box offices:

* Some may find "Simmba" silly to a point but overall, most would agree that this film is pretty good, artistic and a bonafide comedic masterwork; produced as a matter of form but not-without-its-innovations and pleasures. The film is about a cocky, orphan Sangram Bhalerao (Ranveer Singh) from Shivgad, who grows up to be a corrupt police officer. It is his journey from being a bad man-of-the-law to a good one.

* Picking up nuggets from real-life events, the film mirrors society. If the first half is light and frothy that evokes constant laughter, the second half is equally intense and serious. It delivers middle-class life lessons in a blatantly effective manner.

* What really engages you in this over-stretched film are Rohit Shetty`s characteristic melodrama and over-the-top comedy, fast-paced action sequences, witty dialogues replete with puns and spontaneous performances by its ace cast.

* The script loosely adapted from the Telugu film "Temper", is actually a spin-off of Shetty`s previous franchise, "Singham". What`s commendable about the script is how the writers have effortlessly weaved in "Singham" into the narrative. So you do get to see a good chunk of Ajay Devgan delivering his distinctive action stuff.

* The film has ace technical values with excellent production values, brilliant cinematography, skilfully choreographed action sequences, fine editing and intensely dazzling background score. The songs mesh seamlessly into the narrative. They are melodious with catchy tunes and are well picturised.