SBI, Star Cement, Prism Johnson, Dalmia Bharat and Apollo Tyres are the top 5 shares that an investor can think of before making any investment decision, say experts. 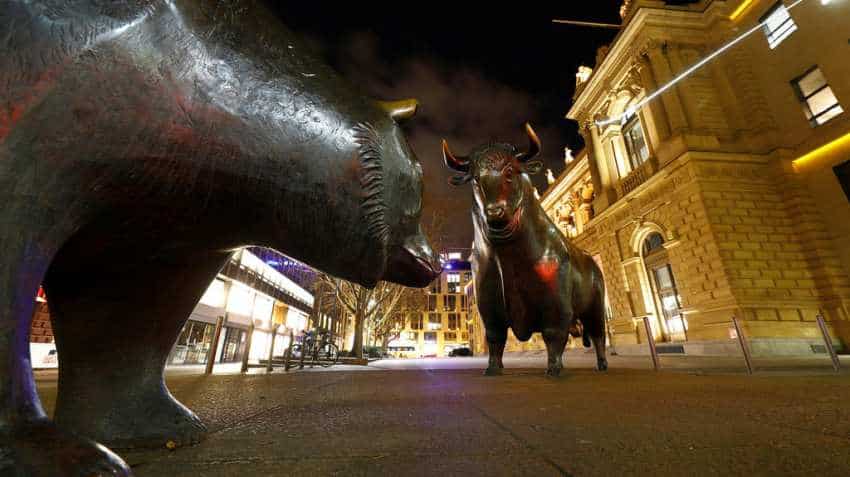 Here are the top five stocks that stock brokerage firms have strongly recommended for the May 14 intraday trade. Photo: Reuters

The stock market has declined for nine straight sessions on Monday raising further bearish speculation among the market observers. However, a smart investor doesn't get bothered by these developments as stock market investments are subject to market risk and hence they are looking for the buying opportunity when the market has corrected more than 600 points at Nifty and around 1500 points at Sensex. On the basis of such attitude of market investors, leading brokerage firms have suggested the following top five shares to buy for the stock market investors for May 14 trade. Those five shares are as follows:

On the suggestion to the stock market investors in regard to the SBI shares, a detail research report by Yes Securities says that the strong fundamentals of the SBI counter suggest and upside momentum of up to 38 per cent in 12-months. The SBI share price may touch Rs 425 per share levels in this period, says Yes Security research report attributed to their experts Rajiv Mehta and Amar Ambani. On Monday, the SBI share price closed at Rs 306.75 per stock.

On the suggestion to the market investors in regard to the Star Cement counter Rajesh Ravi, Analyst, HDFC Securities said, "Fundamentals of the counter suggests and upside movement and the counter can show Rs 150 per shares level in long-term means 12-month perspective." On Monday, the Start Cement share price was Rs 109/stock after market closing.

3] Buy Prism Johnson for 52 pct gains, advises Elara Securities
Prism Johnson reported broadly in-line standalone revenue but EBITDA and adjusted PAT were around 14 per cent and 5 per cent ahead of Consensus estimates, respectively, on the strong performance of the cement division. Net sales grew near 4 per cent YoY to Rs 16.7bn. EBITDA was up around 9 per cent YoY at Rs 1.8bn and EBITDA margin expanded by about 53bp YoY and near 345bp QoQ to 11 per cent, driven by healthy improvement in the cement. division’s performance.

On the suggestion to the stock market investors in regard to the Prism Johnson shares Ravi Sodah, Analyst at Elara Securities said, "Prism Johnson stock is trading at an EV per tonne of $68 on FY21E capacity. We believe the cement division will remain in a sweet spot, given continued strong pricing trend & favorable demand scenario in its key market and benefits of cost rationalization measures. Therefore, we remain positive and reiterate Buy with a TP of INR 132 based on a SOTP (sum of the parts) method." Prism Johnson share price is at Rs 85.3 per stock after closing on Monday intraday trade.

4] Buy Dalmia Bharat for 36 pct gains, advises Yes Securities
Dalmia Bharat's strong operational performance owing to improved pricing scenario in South during the quarter combined with lower energy and freight costs. EBITDA/tonne at Rs 1,165 (+4.1% YoY/+37.1% QoQ). Eastern region has witnessed sharp price hikes in April 2019 with average prices moving up by around Rs 30/bag MoM. Although we estimate partial roll-back going ahead, pricing scenario will remain sturdy as compared to FY19 levels in East. Similarly, experts reckon DBEL will be one of the biggest beneficiaries and raise our EBITDA/tonne estimates by 11.4%/15% for FY20E/FY21E respectively.

On the suggestion to the stock market investors in regard to the Dalmia Bharat counter, a Yes Securities research report suggests that the counter is poised for an upside momentum of near 31 per cent and touch Rs 1,465 per stock levels in 24-months. Dalmia Bharat shares closed at Rs 1,071 per stock levels.

5] Buy Apollo Tyres for 22 pct gains, advises Elara Securities
Apollo Tyres consolidated revenue grew 6% YoY to Rs 42.7bn, 2 per cent below expert estimates. Europe revenue remains flat YoY to Rs 12.1bn while EBIT margin came in at -3.8%, down 590bp YoY on tough market conditions. Consolidated EBITDA declined 18% YoY at Rs 4.2bn, 10% below our estimates while EBITDA margin at 9.9% was down 290bp YoY and 120bp QoQ. Standalone revenue grew by 8% YoY at Rs 30.6bn, 2% above our estimates, volume growth remained flattish YoY owing to a decline in OEM segment, while the replacement segment grew around 7-8 per cent. EBITDA margin was down 280bp YoY and up 50bp QoQ at 11.5%, 20bp above our estimates. The company has recorded a provision of Rs 1.0bn in Q4, which makes total write-off of Rs 2.0bn pertaining to ILFS.