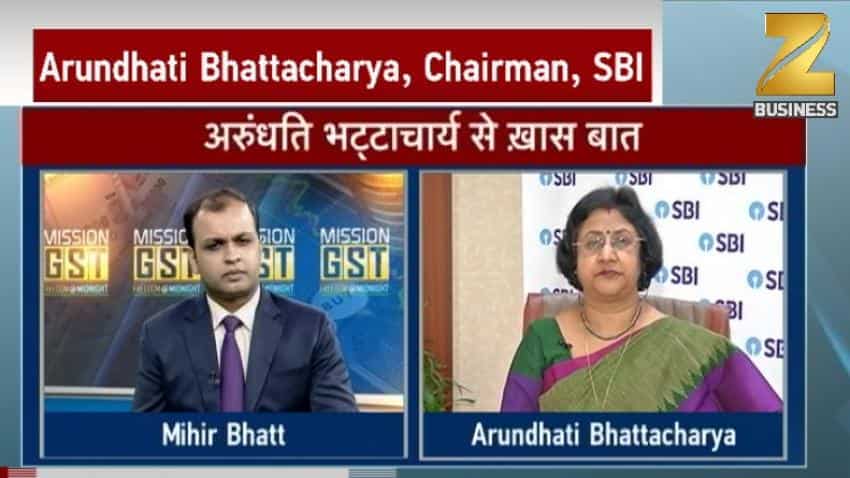 With just a day to go for official launch of Goods and Services tax (GST), Arundhati Bhattacharya, Chairperson, State Bank of India (SBI), in an exclusive conversation with Mihir Bhatt, Editor, Zee Business said that the bank is ready for the new taxation system.

Bhattacharya said, "I think the roll out (GST) would be smooth, if you take us as a bank we are ready to receive the taxes implied under GST. Also as a bank what we need to pay we are ready for it too."

"If institution like us is ready, i definitely expect that big corporates should also be in position to accept gst,"added Bhattacharya.

"It is a big reform for Indian economy and we need to try that this reform gets implemented in a right way so that opportunity arising from it can bring in positive impact on our business growth," she said.

Bhattacharya said that GST will boost consumption and consumer demand.

As per Bhattacharya, the government aims to bring all the four tax slabs slowly into one rate not only this the current rates under GST to also come down in future ahead."

ALSO READ: Sooner or later states will have to bring petroleum under GST, says Arun Jaitley

On banking sector, Bhattacharya said that she is quite optimistic about the directions given by the RBI and government so far on NPA resolution.

She added, "The measures are very clear right now so to that extent i can say the difficulties seems to have reached at peak and will get better from here."

She said, "We have been doing all we can to bring the defaulters for insolvency within the timeline provided by the RBI."