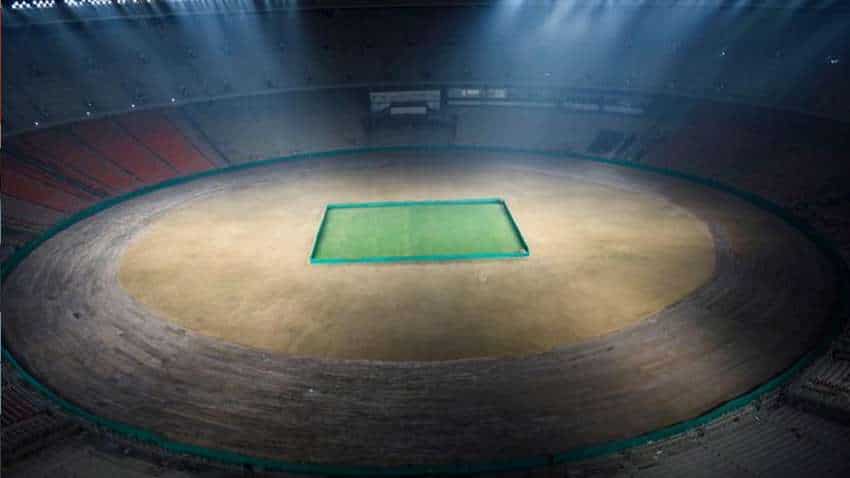 The event will be on the lines of ‘Howdy Modi’ that was held in Houston in 2019. Source - ICC.
Written By: ZeeBiz WebTeam
Edited By: Harish Dugh
RELATED NEWS

Donald Trump is set to visit India this month for the first time as the United States President. On Tuesday, the White House and India’s external affairs ministry announced that Trump and First Lady Melania would visit New Delhi and Ahmedabad during their two-day trip. To welcome Trump, Ahemadabad will host 'Kem chho Trump' event at the Sardar Vallabhbhai Patel Stadium -- touted as the world's largest cricket stadium in terms of seating capacity. The event will be on the lines of ‘Howdy Modi’ that was held in Houston in 2019. The US President will also inaugurate the stadium during his visit. Here is a look at some interesting facts about the Sardar Vallabhbhai Patel Stadium -

1. Also known as the Motera Stadium, the Sardar Vallabhbhai Patel Stadium will have a seating capacity of 1,10,000 people, making the largest in the world. The Kem chho Trump event is expected to be attended by 125,000 people.

2. The Gujarat Cricket Association (GCA) had roped in principal architect Populous, project management consultant STUP Consultants and developer L&T, to redevelop the stadium. A total of Rs 800 crore have been spent on the process.

3. Once ready, the stadium will surpass the Melbourne Cricket Ground (MCG), which can seat 100,024, as the world’s largest cricket stadium.

A glimpse of Motera Cricket Stadium under construction in Ahmedabad

When complete, it will be the largest in the world, holding 110,000 fans  pic.twitter.com/7iIKcw3XQ1

4. The Sardar Vallabhbhai Patel Stadium will have a main cricket ground along with two smaller cricket grounds, four locker rooms, 75 air-conditioned corporate boxes and a club house for GCA members.

5. The stadium will also house 55 rooms in the club house with indoor and outdoor sports, apart from restaurants, Olympic size swimming pool, gymnasium and party area.

6. A metro line is being constructed at one of the entry points of the stadium.

The ‘Kem Chho Trump' event is expected to be attended by government officials, students, working professionals and businessmen, along with several non-resident Gujaratis (NRGs).

"He (Modi) is a great gentleman and I look forward to going to India. So, we'll be going at the end of the month," Trump told reporters in his Oval Office on Tuesday, a day after the White House announced dates of his much-anticipated India trip. Responding to a question, the president indicated that he is willing to sign a trade deal with India if it is the right one.