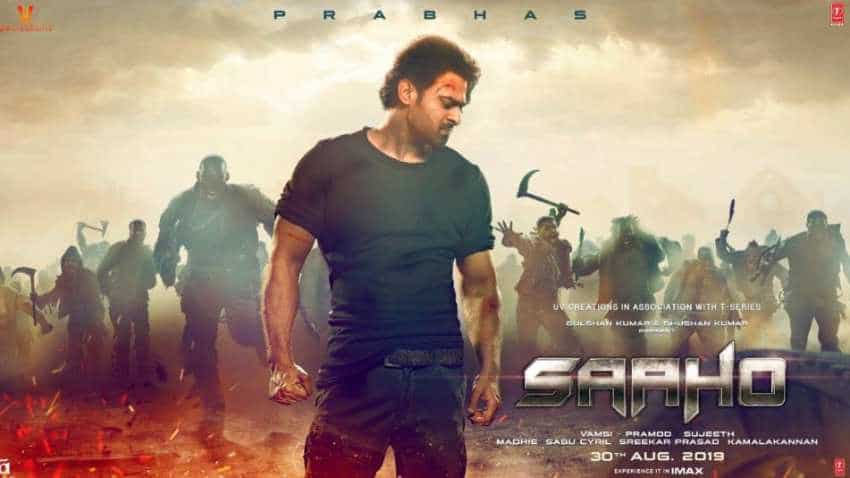 Saaho teaser had garnered over 80 million views on YouTube from all languages.
Written By: ZeeBiz WebTeam
RELATED NEWS

Saaho trailer release: The trailer of much-awaited Prabhaas and Shraddha Kapoor starrer action film Saaho has been released today in four languages. Film trade analyst Taran Adarsh tweeted on Friday, "#Saaho trailer out tomorrow in four languages... #SaahoTrailerTomorrow". Saaho is said to be an action thriller film written and directed by Sujeeth, produced by UV Creations and T-Series. The film has been reportedly shot simultaneously in Hindi, Tamil and Telugu and produced with a budget of ₹300 crore.[3]

Saaho release date: Film Saaho will be released on August 30, 2019.

Earlier, Saaho teaser had garnered over 80 million views on YouTube from all languages. This is the second-highest for any Indian film teaser behind 2.0, which had over 105 million views.

Saaho is expected to do well on the box office. Prabhash had previously played the lead role in SS Rajamouli's magnum opus Baaubali which shattered almost every box office collection records in India. The hype around Saaho, hence, is high as Prabhash will now be seen in a different avatar along with Bollywood actress Shraddha Kapoor in this action drama.

Film trade analyst, critic and influencer Sumit Kadel had tweeted in June that Saaho should earn at least Rs 70 crore to Rs 75 crore on the first day of its release. #SaahoTeaser has generated stir among audience & trade across India. Its too early to talk about its box office part but i am assured that Day-1 collection of #Saaho in India wont be less than ₹ 70-75 cr nett. Tremendous appreciation for the teaser & scale of the film," Kadel tweeted. "#SaahoTeaser is International level stuff. Truly India’s biggest ACTION film . #Saaho will make #Prabhas PAN INDIA SUPERSTAR without an iota of Doubt.  SCALE & GRANDEUR of this film is Unprecedented. Kudos to the team of Saaho @UV_Creations," he had said in another tweet.