It has been a spectacular week for the markets with Sensex, Nifty as well Bank Nifty hitting record highs after the victory of Prime Minister Narendra Modi-led NDA in the just-concluded Lok Sabha elections. 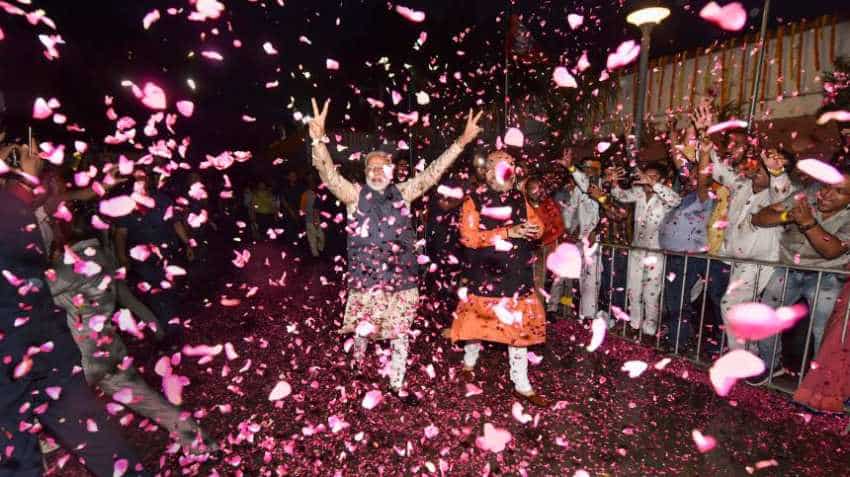 It has been a historic week for the markets with Sensex, Nifty as well Bank Nifty hitting record highs after the victory of Prime Minister Narendra Modi-led NDA in the just-concluded Lok Sabha elections. On the result day, Nifty50 crossed the record 12,000-mark while BSE Sensex crossed the 40,000 level for the first time in history. Bank Nifty also hit a record new high of 31,705. On Friday, Sensex closed at 39,434.72 and Nifty at 11,844.10. In the unprecedented rally, investors too got richer by a whopping Rs 6 lakh crore during the week (May 20-May 24). On May 17, Sensex had closed at 37,930.77. On May 19, the exit polls predicted the return of PM Modi to power. The effect of exit poll results reflected on the Sensex on May 20 (Monday) as it ended the day at 39,353.

Market experts have positive expectation from the Modi government's second term and the current rally is expected to grow.

Brokerage firm Morgan Stanley sees BSE Sensex at 45,000 and NSE at 13,500 by June 2020. A report by Edelweiss Research said, "With the election event now behind, the focus now shifts back to business -- muted, weak on risk appetite and earnings, and we anticipate moderate market returns (3 per cent-plus till June 2020) over the year given high valuations."

In a single-day alone on Friday, investors' wealth zoomed Rs 2.53 lakh crore as the Sensex shot up over 623 points after a decisive mandate for the Narendra Modi-led BJP in the Lok Sabha elections. The BSE Sensex closed at 39,434.72, up 623.33 points or 1.61 per cent.

Riding on the popularity of PM Modi, BJP has won 303 of 543 seats in the Lower House of Parliament.

"With the decisive mandate, we expect policy continuity and look forward to next generation of reforms, which will take the Indian economy to the next phase of accelerated growth. The mandate augurs well for an environment of positivity for equity and could trigger a movement from merely a narrow market performance to a broad-based rally involving mid- and small-cap stocks. In this environment, we expect domestic cyclicals which include industrials and financials to outperform," PTI quoted  Vijay Chandok, managing director and chief executive officer, ICICI Securities. as saying.

On Friday, 26 companies in the 30-share pack closed the day with gains led by ICICI Bank, Larsen and Toubro, Bharti Airtel, Vedanta and Tata Motors rising up to 5 per cent.