In dealing with the right to privacy the Supreme Court touched upon various topics of debate including women's right to abortion, food preferences and the LGBT community. 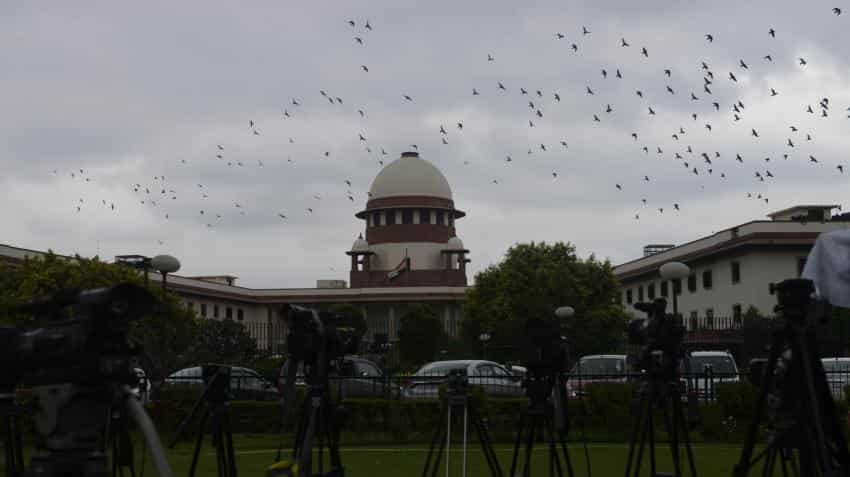 The right to privacy is protected as an intrinsic part of the right to life and personal liberty under Article 21. File Photo. Image Source: IANS
Written By: ZeeBiz WebTeam
RELATED NEWS

The Supreme Court in a ruling on the right to privacy on Thursday protected it as a fundamental right under the constitution. The nine-judge constitution bench discussed on other issues as well such as LGBT rights, privacy rights, food preferences and revisited the basic principles of the Indian Constitution including freedom.

“The right to privacy is protected as an intrinsic part of the right to life and personal liberty under Article 21 and as a part of the freedoms guaranteed by Part III of the Constitution,” SC said.

India’s top court took up this ruling amidst the BJP government that has mandated the use of Aadhaar for a number of facilities including filing of tax returns, availing of provident fund facilities and even mobile numbers that have to be now re-verified with Aadhaar.

In the matter of privacy the court has reinforced that it is a fundamental right of the people. Although it did state certain clauses that showed ‘restraint.’

“The right to privacy as already observed is not absolute,” the court said.

National security, public interest and other fundamental rights provisios would be a restriction to this right. 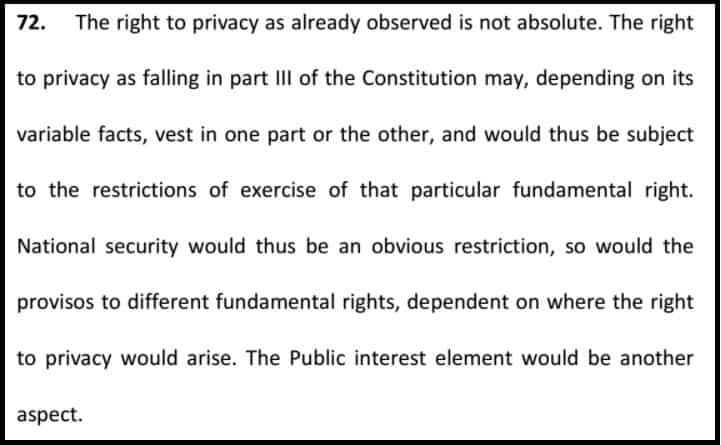 Right to privacy with respect to the decision of women to terminate a pregnancy was left up to the expectant mother.

"Speaking for a Bench of three judges, Chief Justice Balakrishnan held that the reproductive choice of the woman should be respected having regard to the mandate of Section 3," the SC said.

The court was speaking on Suchita Srivastava’s case and said, “The decision in Suchita Srivastava dwells on the statutory right of a woman under the MTP Act to decide whether or not to consent to a termination of pregnancy and to have that right respected where she does not consent to termination. The statutory recognition of the right is relatable to the constitutional right to make reproductive choices which has been held to be an ingredient of personal liberty under Article 21. The Court deduced the existence of such a right from a woman’s right to privacy, dignity and bodily integrity.”

In the 2013 Koushal case, the High court had ruled against protection of LGBT rights, which faced a lot of criticism on the basis of sexual preferences. It had referred to the rights of the community as ‘so-called’ rights.

Justice Singhvi said “That ‘a miniscule fraction of the country’s population constitutes lesbians, gays, bisexuals or transgenders’ (as observed in the judgment of this Court) is not a sustainable basis to deny the right to privacy.”

“The rights of the lesbian, gay, bisexual and transgender population cannot be construed to be ‘so-called rights.’ The expression ‘so-called’ seems to suggest the exercise of a liberty in the garb of a right which is illusory. This is an inappropriate construction of the privacy based claims of the LGBT population,” he added.

Though the bench disagreed with the manner in which Koushal case had dealt with the privacy – dignity based claims of LGBT persons on this aspect it still left its ‘constitutional validity’ to another proceeding.

Beef or No beef?

While tracing the right to privacy the bench also touched upon ‘food preferences’ of individuals and animal slaughter.

“As Indian society has evolved, the assertion of the right to privacy has been considered by this Court in varying contexts replicating the choices and autonomy of the individual citizen,” SC said.

The court was speaking with regards to the Maharashtra government who enforced a beef ban due to cow slaughther in its state two years ago.