Experts are optimistic on MRF shares, as most have given buy rating with stable outlook in business ahead. 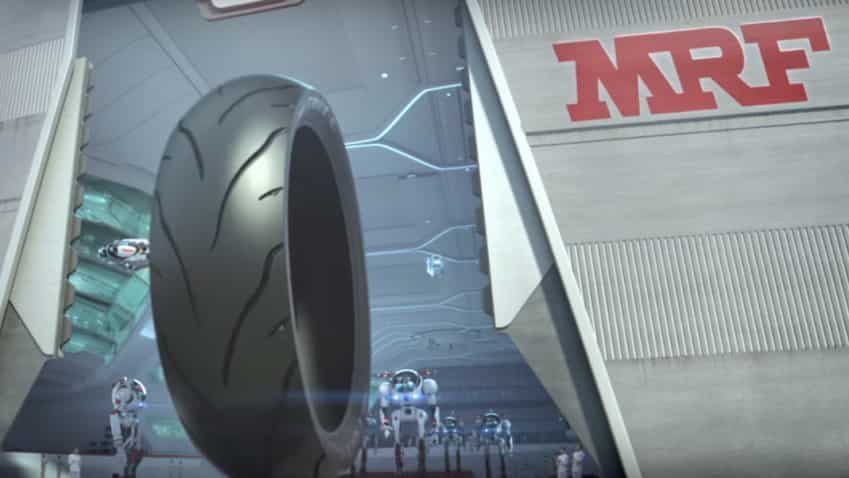 One of the largest tyre makers MRF has become a hot stock for investors on Dalal Street. Photo: MRF Youtube Page

One of the largest tyre makers MRF has become a hot stock for investors on Dalal Street. MRF's shares has risen by nearly Rs 2,000 on Sensex since the time the company presented its Q4FY19. The share price which was traded over Rs 52,600-levels has jumped to an intraday high on Thursday, to Rs 54599 per piece on Sensex. However, the stock finished at Rs 54488 per piece  up by Rs 370.35 or 0.68%. Experts are optimistic on MRF shares, as most have given buy rating with stable outlook in business ahead.

Here's why MRF is a hot stock:

The success of “Steel Muscle” in the TBR segment in the last 1.5 years, per our channel checks, suggests that MRF would be a strong contender to Apollo in the next two years. Given its product acceptance and diversity, we expect strong growth in the truck replacement segment. Also, we believe that the capacity expansion plans would aid growth. Also, in the PCR segment, we expect MRF to gain further traction in 14-inch and 15-inch tyres and launch higher-inch tyres. However, we expect Apollo Tyres to give MRF a run for the money.

In two-wheelers, MRF would focus on capacity addition and brand improvement, in our view. We expect increased capacity in Gujarat to be primarily used for replacement and expect market-share pressures for CEAT.

Vijay Sarthy TS and Rishikesh Huddar analysts here said, "We continue to be positive on buoyancy across segments – TBR, PCR and two-wheelers. The company’s efforts to address the disparity in pricing and regulating dealer inventory would go a long way to steady growth (m). We expect an increased brand focus in two-wheelers and market-share gains. We upgrade the stock to a Buy, with a revised TP of Rs 65,395 (earlier Rs 60,208)."

While Q4 replacement was soft, our checks suggest April volume growth has bounced back to double digit growth for tyre industry. In Q4, we believe revenue growth drags due to market share loss in OEM segment and slowdown in replacement segment, especially in the truck & bus and PCR segments. Domestic sales in FY19 grew 6% YoY to INR 142.7bn and exports sales grew 16% YoY to INR 15.7bn.

Jay Kale and  Vijay Gyanchandani analysts here said, "We expect stable RM and margin expansion to be led by mix improvement (higher replacement vs OEM growth). We reduce our FY20-21E EPS by 8-12%, owing to volume and margin cuts, given weak OEM sentiments. With a higher contribution in the replacement segment vs peers, we expect MRF to outperform in an environment of slowing OEM growth in FY21. We revise to Buy from Accumulate with a new TP of INR 63,534 from INR 68,974 based on 17x (unchanged) FY21E EPS of INR 3,792 as
we roll forward. Further market share loss in the OEM segment and slowdown in the replacement segment remain key risks to our call."

From Thursday's market price, it can be seen that MRF has potential to rise by another over Rs 11,200 ahead.