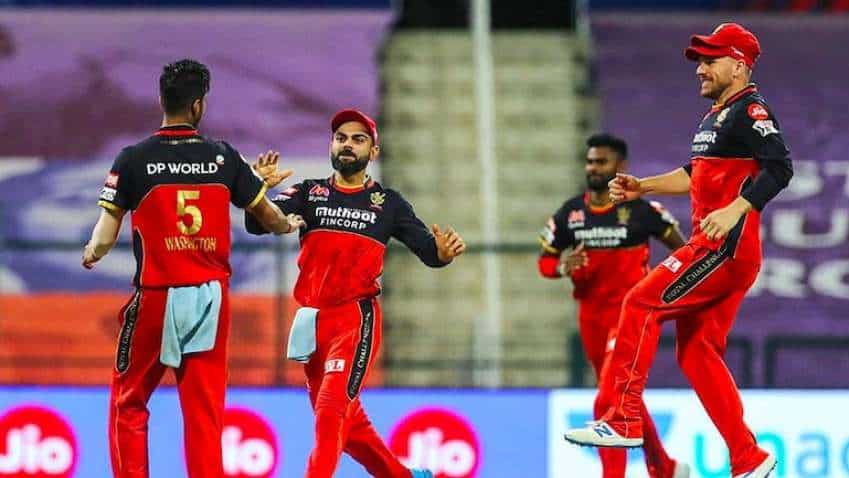 The win took the RCB to the second spot on the points table, and showed that they have emerged as a serious title contender. Although they are equal on points with Delhi Capitals (+0.774), they are second only on the net run rate (+0.182). Both teams have played 10 matches each.

Mumbai Indians are place third with 12 points from nine matches.

Four top teams out of eight qualify for the playoffs.

The 39th match of the 13th IPL was a completely one-sided affair. RCB bowlers came all gun blazing to set the Sheikh Zayed Stadium on fire as they restricted their opponents to just 84/8 wickets in 20 overs -- the lowest ever in IPL when a team has played all 20 overs -- before overhauling the target comfortably. RCB finished at 85/2 wickets in 13.3 overs, or 39 balls to spare.

The RCB bowlers wreaked havoc as they restricted KKR to a paltry total, courtesy Siraj (4-2-8-3) and Yuzvendra Chahal (2/15) who stunned the opposition with some top-quality swing and spin bowing.

Meanwhile, the two-time IPL champions KKR added an unwanted record to their name after managing a meagre 84/8 wickets in their allotted 20 overs. KKR registered the all-time lowest score for a side who played complete 20 overs.

Siraj also joined history books as he became the only player to bowl two maidens in an IPL game. He dismissed Rahul Tripathi and Nitish Rana off successive balls, but missed the hat-trick.

Siraj and Navdeep Saini (1/23) ripped apart the KKR batting with the Eoin Morgan-led side losing half of their men for just 32 runs on board.

Morgan tried his best to steady the sinking ship with a 30-run knock but lacked support from others.

Later, a 27-run partnership for the eighth wicket between Lockie Ferguson (19 not out) and Kuldeep Yadav (12) somehow saw KKR reaching 84/8.

In return, RCB were off to a decent start but lost openers Devdutt Padikkal (25) and Aaron Finch (16) in quick succession with their scorecard reading 46/2 in 6.4 overs.

While KKR pacer Lockie Ferguson picked Finch, Padikkal fell short of the crease while trying to steal a single.

Kohli (18 not out) and Gurkeerat Singh (21 not out) performed the last rites with an unbeaten 38-run stand, driving RCB home with 39 balls to spare.