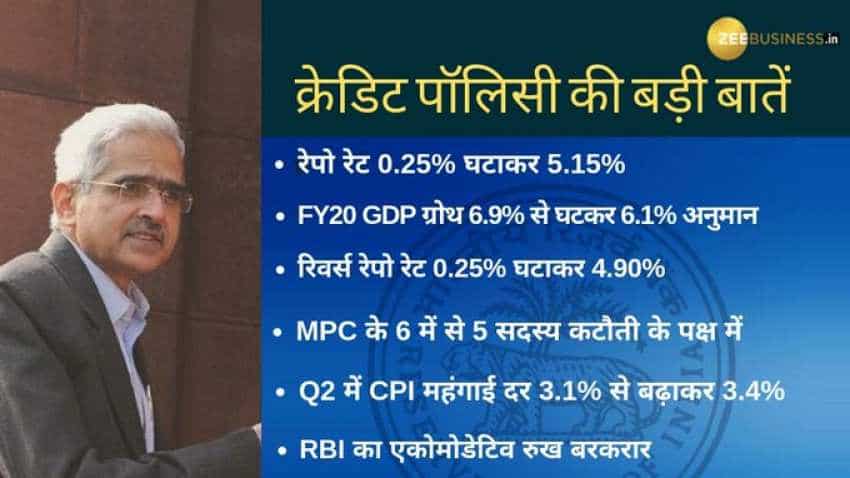 Here are the key highlights:

1. RBI's monetary policy committee decided to cut repo rates by 25 basis points to 5.15 percent.
2. The reverse repo rate under the LAF stands reduced to 4.90 per cent
3. The marginal standing facility (MSF) rate and the Bank Rate to 5.40 per cent.
4. The MPC also decided to continue with an accommodative stance as long as it is necessary to revive growth, while ensuring that inflation remains within the target.
5. These decisions are in consonance with the objective of achieving the medium-term target for consumer price index (CPI) inflation of 4 per cent within a band of +/- 2 per cent, while supporting growth.

6. Indian shares rose today ahead of a likely interest rate cut by the RBI in the backdrop of slowing economic growth, with beaten-down banking stocks leading gains.

10. RBI Governor Shaktikanta Das, according to the minutes of the meeting, had justified the RBI`s unconventional move saying, "the economy needed a larger push" and a reduction in the policy repo rate by the conventional 25bps would be inadequate.

Meanwhile, RBI Governor Shaktikanata Das after the repo rate cut announcement highlighted the fact that the MPC was one in its desire to get the economy moving forward. He said, "All five MPC members supported the cut, they voted unanimously to slash the repo rate by 25 basis points".

Governor Das added,  "There is a dearth in demand in rural and urban areas, but things have improved in agriculture sector."

Governor Das also said, "In August, there has been marked uncertainty global economy."

Analysts say RBI policy, global trends, and foreign funds movement among others to be key drivers for markets next week