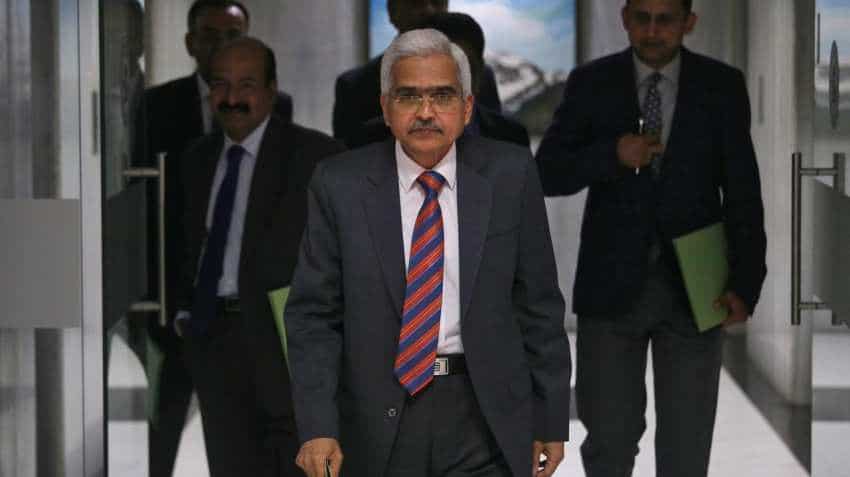 RBI MPC Meeting October 2019: Experts expect a further repo rate cut of 0.50 bps in the backdrop of the muted inflation, which stands lower than the expected 3.2 per cent. Photo: Reuters
Written By: Asit Manohar
Edited By: Prashant Singh
RELATED NEWS

RBI MPC Meeting October 2019: The three day Reserve Bank of India (RBI) bi-monthly monetary policy is underway and the central bank would announce the RBI MPC decisions on 4th October 2019. Since it's just one day to go, the Indian Inc is demanding further 50 bps rate cut from the Governor Shaktikanta Das as the previous rate cuts have failed to reach the end-users. Captains of the Indian industry are of the opinion that due to a multitude of reasons including slow global economic output, low consumer confidence, and actual passing on of these benefits to the retail borrowers, previous rate cuts have failed to stimulate consumer demand and private investment in the economy.

Commenting on his expectations from the RBI MPC meeting Shishir Baijal, Chairman & Managing Director at Knight Frank India said, "Despite progressive reduction by RBI in REPO rate amounting to a cumulative 110 basis points (BPS) over the last 6 quarters, there has not been any significant economic impact of these measures. Due to a multitude of reasons including slow global economic output, low consumer confidence, and actual passing on of these benefits to the retail borrowers, this scale of a rate cut has failed to stimulate consumer demand and private investment in the economy. Flagging demand has now come to a critical point where it is imperative for the RBI to take some drastic steps to jump-start the economy. We strongly believe that RBI should complement the Finance Ministry by taking some high-intensity monetary policy measures that are indeed the need of the hour."

Baijal went on to add that the foremost amongst these suggestions remains a substantial and single 50 basis point rate cut that can reinvigorate consumer sentiment towards consumption and push private investment. Besides, some strong and well-defined initiatives by RBI focusing on liquidity infusion, especially in the real estate sector would also go a long way in stimulating demand and in reviving the stalled supply. "On this count, a temporary relaxation for risk provisioning norms for the stressed real estate sector loans would serve as a breather for projects that are trying hard to find their feet. Also, the recently announced stressed asset fund could have a much wider benefit if its ambit could include all residential projects beyond the mid and affordable segments besides allowing its reach for projects which are troubled for NPA and NCLT classification," said Baijal.

Elaborating upon his expectations from the RBI monetary policy meeting Dr. Niranjan Hiranandani, Senior Vice President at Assocham said, "We expect a further repo rate cut of 0.50 bps in the backdrop of the muted inflation, which stands lower than the expected 3.2 per cent. The slew of fiscal measures recently announced by the Union Finance Minister (Nirmala Sitharaman) aimed at boosting the production and the supply side of economics, helping to ease the liquidity and financing woes of India Inc. The further reduction of repo rate by 0.50 bps will not only bring down the lending rates but also incentivize investment and boost consumption. Also, as per the new mandate of RBI, fresh home loan interest rate will be directly linked to the repo rate leading to the transmission of rate cut benefit directly to the home buyers. This step shall help in spurring up the demand side of the economics resulting in an uptick of the sales momentum."

Anindya Banerjee, Research Analyst — Derivative and Currency at Kotak Securities said, "After the Corporate Tax rate cut, we are expecting around 50 bps further cut in the interest rate by the RBI as at current levels, the interest rates are at untenable level and it requires incremental cuts and ahead of the festival season, the RBI MPC meeting October 2019 is the best suited time for that." He said that a 50 bps rate cut by RBI will boost the bond market flow and equity flow i.e. portfolio investment in India.

However, Anuj Gupta, Deputy Vice President — Currency and Commodity Market at Angel Broking said, "At a time when the consumer confidence and the global slowdown is round the corner, an Interest rate cut of 50 bps may lead to rupee falling against the US dollar. In fact, it would be better if the RBI cuts interest rate by 25 bps and win the confidence of the FIIs (post-Corporate Tax rate cut), who has been fishing out their money from the Indian markets."