In the Fifth Bi-monthly Monetary Policy Statement, 2018-19, the Resolution of the Monetary Policy Committee (MPC) Reserve Bank of India was announced and on the basis of an assessment of the current and evolving macroeconomic situation at its meeting today 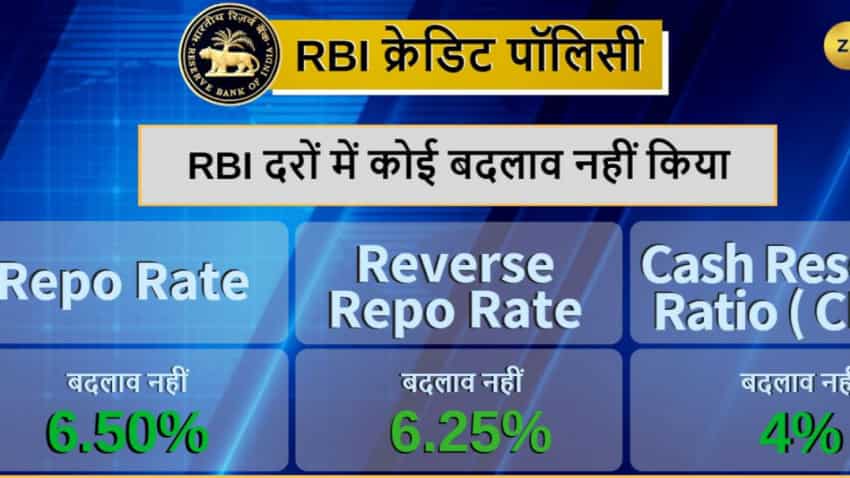 RBI MPC decided to keep the policy repo rate under the liquidity adjustment facility (LAF) unchanged at 6.5 per cent. This is exactly what most analysts had predicted. Image source:
Written By: ZeeBiz WebTeam
RELATED NEWS

Consequently, the reverse repo rate under the LAF remains at 6.25 per cent, and the marginal standing facility (MSF) rate and the Bank Rate at 6.75 per cent.

The decision of the MPC is consistent with the stance of calibrated tightening of monetary policy in consonance with the objective of achieving the medium-term target for consumer price index (CPI) inflation of 4 per cent within a band of +/- 2 per cent, while supporting growth.

In his reaction, Taranpreet Singh, Partner at TASS Advisors said, ""Though there is no change in repo rate from existing 6.5%, MPC is keen to achieve the GDP growth projection rate of 7.4 percent"."

RBI monetary Policy Review Key Takeaways: Check out the top 10
1. Since the last MPC meeting in October 2018, global economic activity has shown increasing signs of weakness on rising trade tensions. Among advanced economies (AEs), economic activity appears to be slowing in the US in Q4:2018, after a buoyant Q3. The Euro area growth lost pace in Q3, impacted by weaker trade growth and new vehicle emission standards. The Japanese economy contracted in Q3 on subdued external and domestic demand.

2. Economic activity also decelerated in major emerging market economies (EMEs) in Q3. In China, growth slowed down on weak domestic demand. The ongoing trade tensions and the possible cooling of the housing market pose major risks to growth in China. The Russian economy lost some traction, pulled down largely by a weak agriculture harvest, though the growth was buttressed by strong performance of the energy sector. The Brazilian economy seems to be recovering gradually from the economic disruption in the first half of the year. The South African economy expanded in Q3, after contracting in the previous two quarters, driven by agriculture and manufacturing.

3. Crude oil prices have declined sharply, reflecting higher supplies and easing of geopolitical tensions. Base metal prices have continued to decline on selling pressure following weak demand from major economies. Gold price has risen underpinned by safe haven demand triggered by political uncertainty in some geographies, though a strong dollar may stem the rise. The inflation scenario has remained broadly unchanged in the US and the Euro area. In many key EMEs, however, inflation has risen, though the recent retreat in energy prices, tightening of policy stances by central banks and stabilising of currencies may have a salutary impact, going forward.

4. On the domestic front, gross domestic product (GDP) growth slowed down to 7.1 per cent year-on-year (y-o-y) in Q2:2018-19, after four consecutive quarters of acceleration, weighed down by moderation in private consumption and a large drag from net exports. Private consumption slowed down possibly on account of moderation in rural demand, subdued growth in kharif output, depressed prices of agricultural commodities and sluggish growth in rural wages. However, growth in government final consumption expenditure (GFCE) strengthened, buoyed by higher spending by the central government.

5. On the supply side, growth of gross value added (GVA) at basic prices decelerated to 6.9 per cent in Q2, reflecting moderation in agricultural and industrial activities. Slowdown in agricultural GVA was largely the outcome of tepid growth in kharif production.  Within industry, growth in manufacturing decelerated due to lower profitability of manufacturing firms, pulled down largely by a rise in input costs, while that in mining and quarrying turned negative, caused by a contraction in output of crude oil and natural gas. Growth in electricity, gas, water supply and other utility services strengthened. Services sector growth remained unchanged at the previous quarter’s level. Looking beyond Q2, rabi sowing so far (up to end-November) has been 8.3 per cent lower as compared with the same period last year due mainly to lower soil moisture levels resulting from a deficient monsoon and a delayed kharif harvest across states. Precipitation during the north-east monsoon as on November 28 was 49 per cent below the long period average.

6. Growth in the index of industrial production (IIP) slowed down to 4.5 per cent in September 2018. Capacity utilisation (CU), measured by the Reserve Bank’s Order Books, Inventories and Capacity Utilisation Survey (OBICUS), increased from 73.8 per cent in Q1 to 76.1 per cent in Q2, which was higher than the long-term average of 74.9 per cent; seasonally adjusted CU also increased to 76.4 per cent. Available high frequency indicators suggest that industrial activity has been improving in Q3. The growth in core industries recovered in October on the back of double-digit expansion in coal, cement and electricity. The purchasing managers’ index (PMI) for manufacturing touched an eleven-month high of 54.0 in November, supported by an expansion in output, and domestic and export orders. According to the assessment of the Reserve Bank’s Industrial Outlook Survey (IOS), the overall business sentiment in Q3 remained stable, with sustained optimism about production and exports.

8. Retail inflation, measured by y-o-y change in CPI, declined from 3.7 per cent in September to 3.3 per cent in October. A large fall in food prices pushed food group into deflation and more than offset the increase in inflation in items excluding food and fuel. Adjusting for the estimated impact of an increase in house rent allowance (HRA) for central government employees, headline inflation was 3.1 per cent in October.

9. Within the food and beverages group, deflation in vegetables, pulses and sugar deepened in October. Among other items, there was a broad-based softening across food items, especially cereals, milk, fruits and prepared meals. Milk and milk products inflation softened caused by surplus supplies in the domestic market. Fruits inflation moderated, while prepared meals registered a price decline for the first time in the CPI series. Inflation, however, showed an uptick in meat and fish, and non-alcoholic beverages.

10. Inflation in the fuel and light group remained elevated, driven by liquefied petroleum gas prices in October, tracking international petroleum product prices.  Kerosene prices also edged up, reflecting the calibrated increase in their administered price. However, electricity prices softened in October. Inflation in rural fuel items such as firewood and chips and dung cake also moderated.  14.  CPI inflation excluding food and fuel accelerated to 6.1 per cent in October; adjusted for the estimated HRA impact, it was 5.9 per cent. Transport and communication registered a marked increase, pulled up by higher petroleum product prices, transportation fares and prices of automobiles. A broad-based increase was also observed in health, household goods and services, and personal care and effects. However, inflation moderated significantly in clothing and footwear, as also housing on waning of the HRA impact of central government employees.

Inflation expectations of households, measured by the November 2018 round of the Reserve Bank’s survey, softened by 40 basis points for the three-month ahead horizon over the last round reflecting decline in food and petroleum product prices, while they remained unchanged for the twelve-month ahead horizon. Producers’ assessment for input prices inflation eased marginally in Q3 as reported by manufacturing firms polled by the Reserve Bank’s IOS. Domestic farm and industrial input costs remained high. Rural wage growth remained muted in Q2, while staff cost growth in the manufacturing sector remained elevated.

Even as inflation projections have been revised downwards significantly and some of the risks pointed out in the last resolution have been mitigated, especially of crude oil prices, several uncertainties still cloud the inflation outlook. First, inflation projections incorporate benign food prices based on the realised outcomes of food inflation in recent months. The prices of several food items are at unusually low levels and there is a risk of sudden reversal, especially of volatile perishable items. Secondly, available data suggest that the effect of revision in minimum support prices (MSPs) announced in July on prices has been subdued so far. However, uncertainty continues about the exact impact of MSP on inflation, going forward. Thirdly, the medium-term outlook for crude oil prices is still uncertain due to global demand conditions, geo-political tensions and decision of OPEC which could impinge on supplies.

Fourthly, global financial markets continue to be volatile. Fifthly, though households’ near-term inflation expectations have moderated in the latest round of the Reserve Bank’s survey, one-year ahead expectations remain elevated and unchanged.

Conclusion
Against this backdrop, the MPC decided to keep the policy repo rate on hold and maintain the stance of calibrated tightening. While the decision on keeping the policy rate unchanged was unanimous, Dr. Ravindra H. Dholakia voted to change the stance to neutral. The MPC reiterates its commitment to achieving the medium-term target for headline inflation of 4 per cent on a durable basis.