The Reserve Bank of India (RBI) today left the repo rate unchanged at 6.5 per cent, while maintaining the stance of 'calibrated tightening' of policy. This is the second time in a row that the central bank did not tinker with the interest rates. 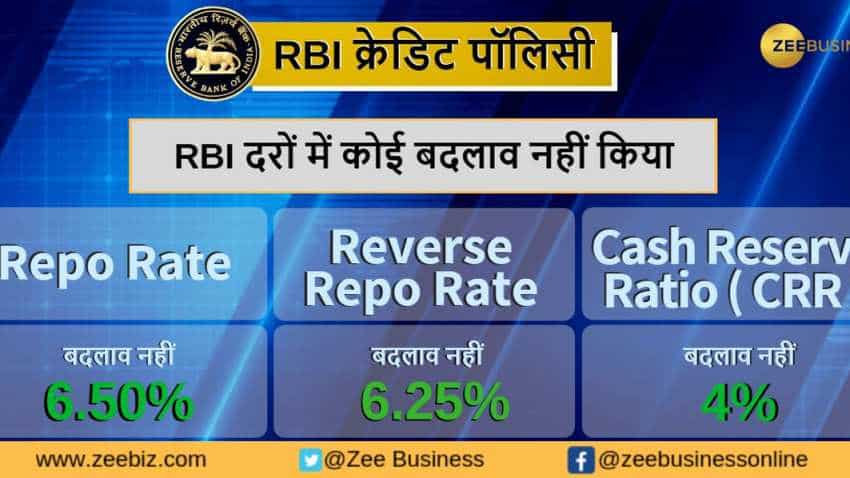 Governor Urjit Patel led MPC chose to play it safe and did not do what most of India, including the central government, wanted - cut rates! Instead, it chose to do the next best thing - stick with the status quo by keeping the repo rate at 6.50 pct. The Reserve Bank of India (RBI) today left the repo rate unchanged at 6.5 per cent, while maintaining the stance of 'calibrated tightening' of policy. This is the second time in a row that the central bank did not tinker with the interest rates. According to RBI statement, "The decision of the Monetary Policy Committee is consistent with the stance of calibrated tightening of monetary policy in consonance with the objective of achieving the medium-term target for consumer price index (CPI) inflation of 4 per cent within a band of +/-2 per cent, while supporting growth."

The decision on keeping the policy rate unchanged was unanimous, Ravindra H Dholakia voted to change the stance to neutral. Top 10 key highlights of RBI's policy announcement are:

2. RBI said inflation in the second half of the current fiscal is projected at 2.7-3.2 per cent.

3. The reverse repo rate under the LAF remains at 6.25 per cent, and the marginal standing facility (MSF) rate and the Bank Rate at 6.75 per cent.

4. The inflation scenario has remained broadly unchanged in the US and the Euro area. In many key EMEs, however, inflation has risen, though the recent retreat in energy prices, tightening of policy stances by central banks and stabilising of currencies may have a salutary impact, going forward.

6. Gross fixed capital formation (GFCF) expanded by double-digits for the third consecutive quarter, driven mainly by the public sector’s thrust on national highways and rural infrastructure, which was also reflected in robust growth in cement production and steel consumption.

7. Growth of imports accelerated at a much faster pace than that of exports, resulting in net exports pulling down aggregate demand.

7. On the supply side, growth of gross value added (GVA) at basic prices decelerated to 6.9 per cent in Q2, reflecting moderation in agricultural and industrial activities.

8. Growth in electricity, gas, water supply and other utility services strengthened. Services sector growth remained unchanged at the previous quarter’s level. Of its constituents, growth in construction activity decelerated sequentially, but it was much higher on a y-o-y basis. 8.

9. According to the assessment of the Reserve Bank’s Industrial Outlook Survey (IOS), the overall business sentiment in Q3 remained stable, with sustained optimism about production and exports.

10. Retail inflation, measured by y-o-y change in CPI, declined from 3.7 per cent in September to 3.3 per cent in October. A large fall in food prices pushed food group into deflation and more than offset the increase in inflation in items excluding food and fuel.

11. Adjusting for the estimated impact of an increase in house rent allowance (HRA) for central government employees, headline inflation was 3.1 per cent in October.

12. Within the food and beverages group, deflation in vegetables, pulses and sugar deepened in October. Among other items, there was a broad-based softening across food items, especially cereals, milk, fruits and prepared meals. Milk and milk products inflation softened caused by surplus supplies in the domestic market.

14. CPI inflation excluding food and fuel accelerated to 6.1 per cent in October; adjusted for the estimated HRA impact, it was 5.9 per cent. Transport and communication registered a marked increase, pulled up by higher petroleum product prices, transportation fares and prices of automobiles.

15. Inflation expectations of households, measured by the November 2018 round of the Reserve Bank’s survey, softened by 40 basis points for the three-month ahead horizon over the last round reflecting decline in food and petroleum product prices, while they remained unchanged for the twelve-month ahead horizon.