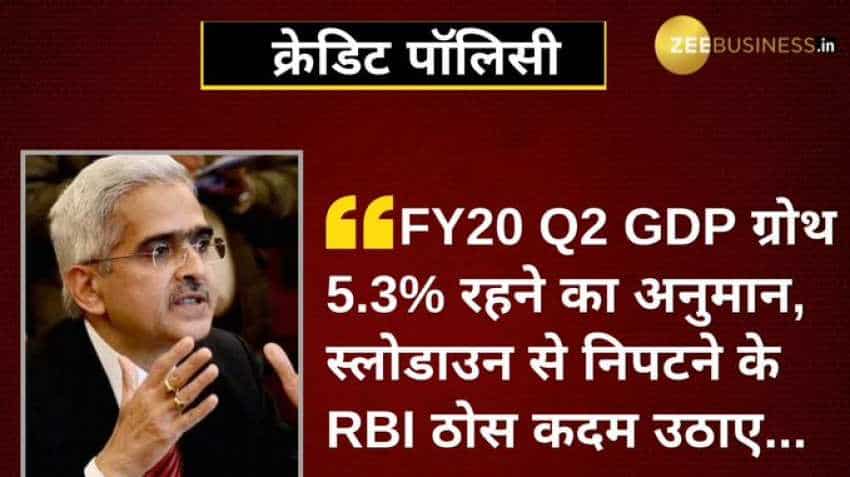 Regarding the PMC Bank fiscal deficit, Governor Das said, "It is under our notice and RBI moved very swiftly." Image source: Twitter/Zee Business

Maintaining an accomodative stance, the Reserve Bank of India (RBI) today cut the repo rate for the fifth consecutive time to reverse the consumption slowdown and boost economic growth. RBI announceed a 25 bps repo rate cut to 5.15%. Zee Business TV has been proven right as it had forecast that the RBI would be cutting key interest rates by 25 bps. Addressing media persons, RBI Governor Shaktikanata Das in Mumbai explained that adequate time should be given for these efforts to show results. He said, "It takes time for rate cuts to filter into economy. RBI will also have to check the effect of government's fiscal measures. This is why RBI has not effected a repo rate of over 25 basis points."

After the announcement, RBI Governor Shaktikanta Das said explained what went into the final decision to effect the 25 bps repo rate cut. Here are some quotes from RBI Governor's reaction at the press meet:

In good news for all those eyeing cheaper loans down the road, Governor Das said, "Central bank will retain its accommodative stance." How long? Das said, "Till the momentum of the GDP does not revive."

The RBI Governor highlighted the fact that the MPC was one in its desire to get the economy moving forward. He said, "All MPC members supported the cut, they voted unanimously to slash the repo rate by 25 basis points".

Governor Das said, "There is a dearth in demand in rural and urban areas, but things have improved in agriculture sector."

He added, "In August, there has been marked uncertainty global economy."

On whether the rate cuts will have any deleterious impact on the economy, Governor Das eased fears by saying, "There is no reason to doubt the fact that the government will adhere to the fiscal deficit."

Explaining the global situation and the impact on RBI, Das explained, "The global markets have weakened since the last RBI meeting. In this situation, central banks have tried to maintain their accommodative stance."

Regarding the PMC Bank fiscal deficit, Governor Das said, "It is under our notice and RBI moved very swiftly."

Indicating that this is an isolated instance, Governor Das said that people should not read too much into the case, adding "One case should not be highlighted to generalise about the health of the cooperative banking sector."

RBI to go for 35 basis points hike in rates at next week's monetary policy meeting? What Bofa Securities report said