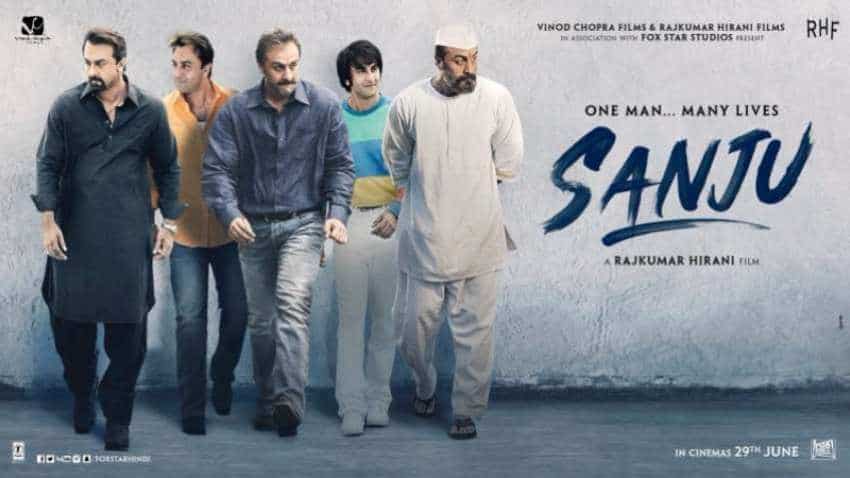 The ‘Sanju’ movie starring Ranbir Kapoor has turned out to be the best bollywood movie so far in 2018. This movie which written by Abhijit Joshi and Rajkumar Hirani, is an Indian biography film showcasing the life of actor Sanjay Dutt. The movie highlights good and ugly days of Sanjay Dutt especially his days in prison. This movie was highly awaited by many Indians, as the movie shows scandalous journey of  Sanjay Dutt’s from being superstar to surviving in ongoing jail terms in regards to link with terrorism acts. Ranbir Kapoor who is referred by many fans as Chocolate Boy, had undergone entire appearances change for portraying Sanjay’s character well. This hard work of Ranbir Kapoor has finally paid off, as Sanju movie has now entered in the elite club of Rs 500 crore movie.

The movie started on good note, breaking all the records of box office collections.  It collected Rs 34.75 crore on the first day of its release and and earned Rs 38.60 crore and Rs 46.71 crore on the second and third day, respectively.

In 2018, Ranbir Kapoor’s Sanju is just few basis crores away in outrunning Padmavat which casts actress Deepika Padukone, Ranveer Singh and Shahid Kapoor as lead characters. Padmavat’s worldwide collection stands at Rs 525 crores. Padmavat was based on a historical story of Rani Padmavati.

Ranbir’s Sanju would be second movie in 2018 to enter into elite club of movies who have crossed Rs 500 crore mark after Padmavat.

Not only this, Ranbir’s Sanju comes in the books of a club which is highly maintained by two Khans of Bollywood.

Aamir Khan has continued to be a king when it comes to giving movies which can easily cross over Rs 500 crore. His movies like Dhoom 3, PK, Secret Superstar and especially Dangal has changed the phase of Indian bollywood cinematography.

The time where a Rs 100-mark was considered as a blockbuster is now seen as just a hit movie because of new collections created by Aamir Khan.

The first movie to create a Rs 500 crore box office collection was Aamir Khan’s Dhoom 3 in December 2013 with a collection of Rs 542 crore worldwide. The movie was based on crime, drama and thriller casting actors like Katrina Kaif, Abhishek Bachchan and Uday Chopra as supporting characters.

This was then broken by another Aamir Khan’s masterpiece ‘PK’ movie in December 2014. The movie revolved around friendship between strangers belonging to different world. The combination of comedy and drama was highly loved by audiences, as the movie made a box office collection of Rs 754 crore worldwide. It had actors like Anushka Sharma and Sushant Singh Rajput as well.

To break the legacy of Aamir Khan would be Salman Khan who is popular as Bhaijaan among Indian hearts. Right from big celebrities to common man almost everyone is a fan of Salman Khan and they watch his movie with great enthusiasm. Salman Khan ‘s Bajrangi Bhaijaan broked record of Aamir Khan’s first two above mentioned movies by earmarking a box office collection of massive Rs 890 crore worldwide.

Bajrangi Bhaijaan which was released on July 08, 2015 showcased a simple hearted character called as Bajrangi played by Salman Khan and his journey to reunite a young Pakistani girl to her family. The movie also had stars like Kareena Kapoor and Nawazuddin Siddiqui.

In the same month July 2015, apart from Bajrangi Bhaijaan another movie called as Bahubali starring Anushka Shetty, Prabhaas and Rana Daggubati made a box office collection of Rs 587 crore worldwide. This movie was based on a drama, fantasy and lots of amazing action which was positively praised across nations.

Once again Salman Khan surprised audiences with another blockbuster movie named as Sultan in July 2016, which also had Anushka Sharma as lead actress. The movie was based on a middle-aged man who is a former wrestling champion and Olympic Medallist. The movie collected Rs 574 crores worldwide.

While Salman Khan was enjoying his fame of creating movies over Rs 500 crore, Aamir Khan’s released Dangal in December 2016, which was also based on wrestling like Sultan. The only difference was Aamir Khan’s Dangal portrayed a life of two wrestler daughters’ struggle towards glory at the Commonwealth Games.

Dangal is by far the highest grossing movie in the history of Bollywood with a gross collection of Rs 2,001 crores worldwide.

Later in 2017, Bahubali 2:The Conclusion which revealed the mystery of previous version, made a gross collection of Rs 1,600 crores worldwide, It had the same characters like first Bahubali, and is considered as the second highest gross collector in Indian cinematography.

Aamir Khan did not leave to make new headline even in 2017, as his movie ‘Secret Superstar’ which showed a life of a young girl and her passion for singing, made a box collection of over Rs 820 crores worldwide. Apart from Aamir Khan, the movie had characters like Meher Vij and Zaira Wasim.

The year 2017 began with a lot of excitement and it did not failed to disappoint us when it was ending as well. Salman Khan’s Tiger Zinda Hai released in December 2017, made a gross collection of Rs 560 crores worldwide. The movie a sequel of Ek Tha Tiger starring Katrina Kaif as lead actress.

Coming back to 2018, Sanju is still expected to make more collections and it would be interesting to see where this movie is headed. For now looking back-to-back movies like Padmavat, Baaghi 2, Raid, Toilet Ek Prem Khatha and now Sanju, one can expect 2018 is an exciting year for B-town and movie lovers.