Making a U-turn on his political plunge, superstar Rajinikanth on Tuesday announced that he will not join politics and start a party as announced earlier, citing his frail health condition. 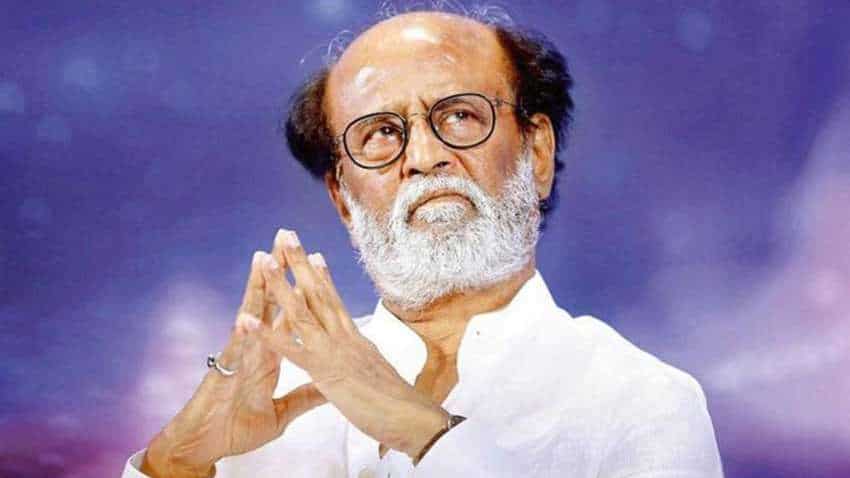 Rajinikanth said he cannot confine his election campaign to media and social media and that it would not give the desired public 'resurgence' he had mentioned in March this year. Reuters
RELATED NEWS

Superstar Rajinikanth on Tuesday has stopped his entry into the political arena. Making a U-turn on his political plunge, Rajinikanth announced that he will not join politics and start a party as announced earlier, citing his frail health condition.

Rajinikanth had first announced in 2017, after years of speculation, that he would indeed enter politics ahead of the 2021 Assembly elections in Tamil Nadu and field candidates from all 234 seats in the state.

Rajinikanth announced earlier this month that he will launch his political party in January and disclose the specifics by December 31.

Rajinikanth, promising his brand of spiritual politics, had then dramatically asserted that he was even ready to risk his life for the sake of people's welfare by making a foray into politics.

Discharged from a Hyderabad hospital on Sunday after being treated for blood pressure fluctuations, Rajinikanth expressed fears over those accompanying him in his possible political journey facing "mental and economic" problems in the due course over his possible health issues.

After earlier acknowledging reports of him undergoing renal transplant in 2016, he recalled the hospitalisation for blood pressure fluctuation and said it could affect his kidney.

"Therefore, I inform with great regret I am unable to come to politics by floating a political party. Only I know the pain behind making this announcement," the 70 year-old actor said in a statement, days after declaring he will float his own outfit in January and face the polls.

Rajinikanth, however said he will serve people in whatever ways he can without entering electoral politics.

In the detailed statement, Rajinikanth recalled four of the crew members of his current venture 'Annatthe' testing positive for coronavirus despite safety measures put in place and pointed out he had tested negative for the contagion.

Rajinikanth had participated in the shoot, involving about 120 people, despite doctors advising him against it, he said adding, later he suffered from blood pressure fluctuations.

"Clinically, there should not be any fluctuation in my blood pressure as it would severely affect my alternate kidney and therefore I was under medical observation for three days," he said.

"I see this as a warning given by God to me," he said and pointed out that the movie's producer, Kalanidhi Maran of Sun Pictures, had postponed the shoot.

Rajinikanth said he cannot confine his election campaign to media and social media and that it would not give the desired public 'resurgence' he had mentioned in March this year.

In physical meetings, Rajinikanth would have to meet lakhs of people, he said, adding "I had to be hospitalised for three days after being in a group of 120 and now a new strain of coronavirus has also emerged."

Though there may be a vaccine, Rajinikanth was, however, consuming "immuno suppressant", the actor said.

Under these conditions amid the pandemic, if he suffers a health issue, those accompanying him on his political journey may have to face many issues and embarrassments, besides "mental and economic" problems, he said.

"I am not ready to make a victim of those coming with me by fearing what others would say," if he backtracked from his earlier statement, where he said he "would risk my life," Rajinikanth said.

Rajinikanth's re-think on politics would "disappoint" members of his Rajini Makkal Mandram, seen as a precursor organisation of his political party and the people, he said.

"Forgive me," he told them.

He hailed the discipline of the RMM activists for the last three years and said their service will not go waste.

During their meeting with him on November 30, they had insisted to him that his health was more important and that they would abide by whatever decision he would take, he said, adding RMM would continue to function as usual.

Rajinikanth's major brush with politics was in 1996 when he spoke out against the then AIADMK government led by late J Jayalalithaa with the DMK-TMC combine trumping the ruling party in the assembly elections.

Rajinikanth also said he never shied away from speaking the truth.

Describing the Tamil people as "Gods", Rajinikanth urged them and his fans "who desire truth and honesty" besides being concerned about his health, "to kindly accept my decision."