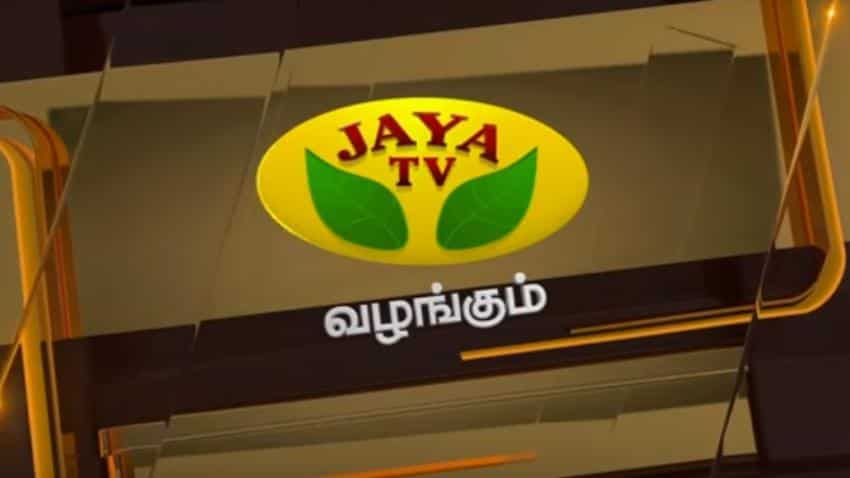 Of the 187 premises where the searches were conducted, most of it were in Tamil Nadu, a handful in Hyderabad, three in New Delhi, and one in Bengaluru. Image Source: Jaya TV/ Youtube
RELATED NEWS

Dhinakaran, the deposed AIADMK deputy general secretary, condemned as a "conspiracy" the searches undertaken by the Income Tax department(I-T) mostly in Tamil Nadu and targeted the Centre.

Of the 187 premises where the searches were conducted, most of it were in Tamil Nadu, a handful in Hyderabad, three in New Delhi, and one in Bengaluru, he said.

Such premises also include some which are linked to Jaya TV, Dhinakaran, Sasikala, and her brother Divakaran and they all fall under the category of assessees tagged for suspected tax evasion, the official said.

Dubbing the searches a "conspiracy", Dhinakaran alleged it was to oust him and his jailed aunt from politics.

The searched premises include those belonging to Jaya TV (Mavis Satcom Ltd), its associates, Jazz Cinemas, an alcoholic beverages brewery, Midas Distilleries, a jewellery outlet and other firms, the official said.

Dhinakaran said his farm house off Auroville at Puducherry was searched. He, however, denied that his house in Chennai was raided.

On the raid in the farm house, the I-T official said it was held as part of searches into Jaya TV's account.

Searches were conducted only in the premises of those who held management positions, their associates, confidants or aides, the official said.

On the rationale behind the searches, the official said it was launched after identification of "clusters of shell companies, cash deposits in banks after demonetisation and reliable information of acquisition of benami properties and Financial Intelligence Unit's inputs."

Hitting out at the Centre, Dhinakaran said, "who can direct income tax raids, it is only the Central government...It is apparent that it is the Centre."

Without naming the BJP, he said "we will not allow the party responsible for this (tax raids) in Tamil Nadu."

He said tax men were "sitting at the residence of my secretary Jana who has been for 13 years personal assistant to my wife (Anuradha) at Jaya TV."

"A conspiracy is on," he said and added that it was to see that he and Chinnamma (Sasikala) "should not be in politics."

He said he and his family had been experiencing such things for over three decades and that they will deal with it legally and not be cowed down.

Jaya TV also reported the searches by tax sleuths in its premises and at Jazz cinemas.

As many as 10 premises in Thanjavur, 13 in Coimbatore one in Pudukottai, four in Tiruchirappalli and one each in Chidambaram and Cuddalore, besides six in Namakkal were among those searched, the official said.

Apart from it, 13 premises were searched in neighbouring Puducherry. The official said.

All these were conducted by more than a dozen teams since this morning, the official said, adding, police security was provided during the searches.

Meanwhile, at Mannargudi in Tiruvarur district, raids were conducted at the houses and office premises of Sasikala's husband M Natarajan, her relatives including Mahadevan, Venkatesan and Divakaran and a former councillor of Thanjavur.

A group of 30 I-T officials conducted raids at 11 places in Thanjavur and Tiruchirappalli districts from 7 am.

In Coimbatore, I-T sleuths raided the house and business establishments of Arumugasamy, a sand merchant in the city, according to police sources.

The sleuths also carried out raids on the house of one Sajivan, who supplied wood and interiors to the Kodanadu bungalow in Kotagiri belonging to late Jayalalithaa, they said.

Raids were also conducted at the house and wood workshop of Sajivan in Gudalur in Nilgiris district and at three estates--Kodanadu, Curson and Medanadu, they added.