PM Yoga Award 2019 List: These winners to get Rs 25 lakh each - Here's all you need to know about them

The Ayush Ministry has announced the names of winners of the Prime Minister’s Awards for Outstanding Contribution for Promotion and Development of Yoga -2019. 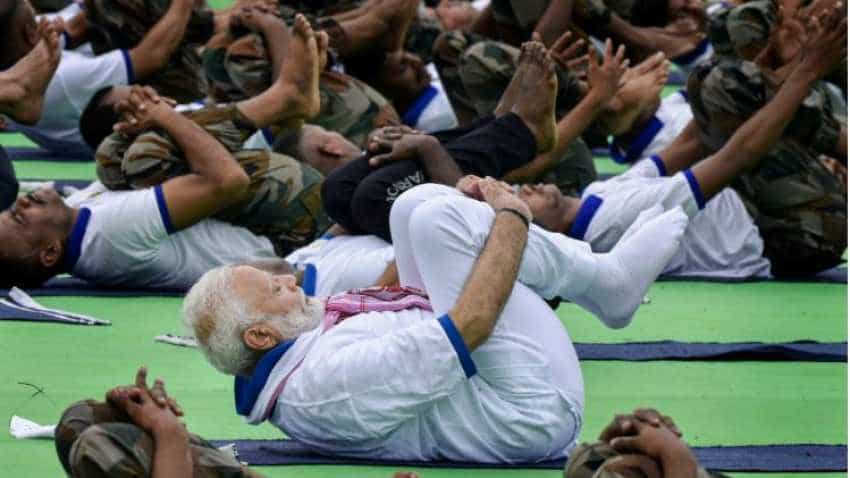 The Ayush Ministry has announced the names of winners of the Prime Minister’s Awards for Outstanding Contribution for Promotion and Development of Yoga -2019. In his address during the International Yoga Day celebration in Ranchi today, Prime Minister Narendra Modi appreciated the hard work and commitment of the winners of Prime Minister’s Award for Promotion & Development of Yoga. PM Narendra Modi had announced the institution of awards for the promotion and development of Yoga on the occasion of the 2nd International Day of Yoga celebrations at Chandigarh on 21st June, 2016. The winners will be felicitated with of a Trophy, Certificate and a Cash Award each. The value of each Cash Award would be Rs. 25.00 lakhs.

The Ministry of AYUSH developed the guidelines for the awards. Two committees were constituted - Screening Committee (for preliminary evaluation) and Evaluation Committee (Jury). Nominations for the awards were invited through open advertisement.

The awardees were selected after considering 79 nominations received under different categories.

Swami Rajashri Muni is a practicing Yogi from Limbdi, Gujarat.  He was administered yoga deeksha by Swami Kripalvananda in 1971. Swami Rajashri Muni founded the Lakulish International Fellowship’s Enlightenment Mission (Life Mission) in 1993, and the Mission has carried out substantial work for promotion of Yoga as well as in humanitarian service. Swami Muni has touched the lives of thousands of people through the Life Mission, in his efforts to promote and propagate the knowledge and practice of the ancient science of Yoga and to provide selfless service to humanity. He has authored many books covering diverse aspects of Yoga, like Yogic philosophy and Yoga Therapy. He is also the spiritual Head and Chairman of the Lakulish Yoga University, Chharodi, Gujarat, an institution that facilitates students to excel in Yoga and to explore its different facets.

Ms. Antonietta Rozzi is a practicing Yoga Teacher from Lerici, Italy having more than 42 years of experience in the field of Yoga. Originally a  student of the Swami Shivananda Yoga Tradition, she subsequently learnt advanced aspects of Yogic practices from different Indian Yoga masters. She has had an illustrious professional carrier in Yoga teaching, and is respected globally for her erudition and commitment to the subject. She is the founder president of Sarva Yoga International and worked for promoting Traditional Indian Yoga in Italy and Europe for over four decades. She holds many important positions in Yoga professional bodies in Europe. Her work has added recognition to Yoga as a promising academic field and to Yoga Therapy as a viable healing system in parts of Europe.

Bihar School of Yoga, Munger was founded in 1964 by Sri Swami Satyananda Saraswati. The school is known for Yoga techniques developed through a synthesis of many approaches based on traditional vedantic, tantric and yogic teachings in conjunction with contemporary physical and mental health sciences. Bihar School also guides yoga projects and medical research in association with many reputed hospitals, organisations and establishments. Programmes made by Bihar School of Yoga are being used today in education, Government sector, hospitals, Defence institutions, private and public sector industries and even prisons. The School publishes a reputed monthly magazine called "Yoga" covering different aspects of the discipline since November 2013. Besides, it has more than 100 publications, many of which are used as referral books in different Yoga courses.

Japan Yoga Niketan was established in1980 and has been a torch-bearer of Yoga in Japan. It functions is association with Yoga Niketan, Rishikesh and S-VYASA Yoga University, Bengaluru. The Institute runs several Yoga training and therapy courses of high quality, through which Yoga has developed roots in Japan. The Institute is instrumental in bringing institutionally certified Yoga professionals into Japan, which helped to bring standards and strengthen the scientific concepts of Yoga in that country. Their publication, ‘Yoga Therapy Theory: Modern Methods Based on Traditional Teachings of Human Structure and Function’ is respected for its authenticity.