PM Narendra Modi has kept some departments with himself; find out which ones

As per the Constitution, the total number of Union ministers, including the Prime Minister shall not exceed 15 per cent of the number of members in the LS 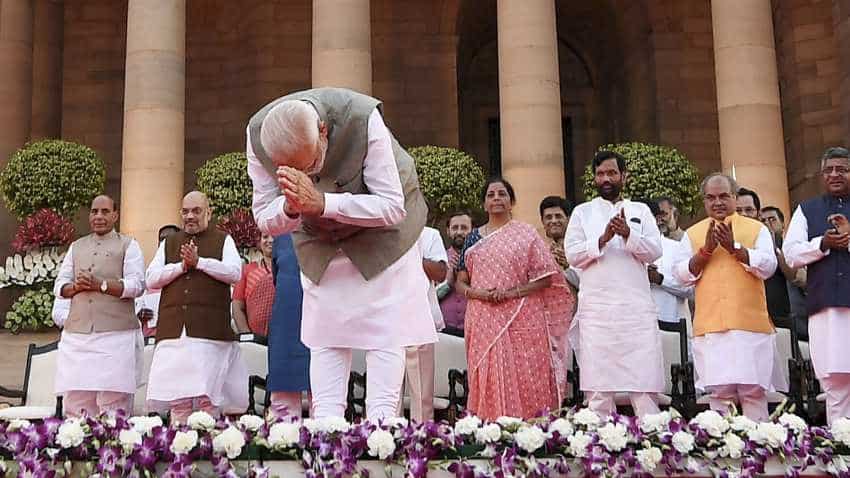 Prime Minister Narendra Modi can have as many as 80 ministers in the 543-member Lok Sabha. Image source: PTI

As Prime Minister Narendra Modi begins his second term, helming a 58-member council of ministers, the allocation of portfolio has been announced today by the President of India. Besides 25 Cabinet ministers including Amit Shah, Rajnath Singh, Nirmala Sitharaman, Nitin Gadkari, Smriti Irani, Piyush Goyal and S Jaishankar, nine were sworn in as Minister of State with Independent charge and another 24 as Minister of State at the sprawling lawn of Rashtrapati Bhawan on Thursday.

However, PM Modi has not allotted all departments to ministers and has, in fact, kept a few with himself. Prime Minister Narendra Modi has kept with himself the Ministry of Personnel, Public Grievances and Pensions; Department of Atomic Energy; Department of Space; All important policy issues; and all other portfolios not allocated to any Minister.

Top Cabinet posts and to whom they were allotted:

1. Among Cabinet Ministers, Raj Nath Singh will take charge as Minister of Defence.

2. Amit Shah is the new Minister of Home Affairs.

3. Nitin Jairam Gadkari is in charge of Minister of Road Transport and Highways; along with Minister of Micro, Small and Medium Enterprises.

4. D.V. Sadananda Gowda is the Minister of Chemicals and Fertilizers.

5. Nirmala Sitharaman, who was Defence Minister in the earlier cabinet, is Minister of Finance; and Minister of Corporate Affairs.

7. Narendra Singh Tomar takes charge of Ministry of of Agriculture and Farmers Welfare; along with Minister of Rural Development; and Minister of Panchayati Raj.

8. Ravi Shankar Prasad is Minister of Law and Justice, Minister of Communications; and Minister of Electronics and Information Technology.

9. Harsimrat Kaur Badal, an MP from SAD, is the Minister of Food Processing Industries.

10. Thaawar Chand Gehlot has been assigned the charge as Minister of Social Justice and Empowerment.

11. Dr. Subrahmanyam Jaishankar is the new Minister of External Affairs. A seasoned diplomat, Jaishankar was the Indian government's pointsman for China and the US.

As per the Constitution, the total number of Union ministers, including the Prime Minister shall not exceed 15 per cent of the number of members in the LS. Modi can have as many as 80 ministers in the 543-member Lok Sabha.