India has witnessed a number of changes in the last few years, thanks to technology and some of the big steps taken by the government. 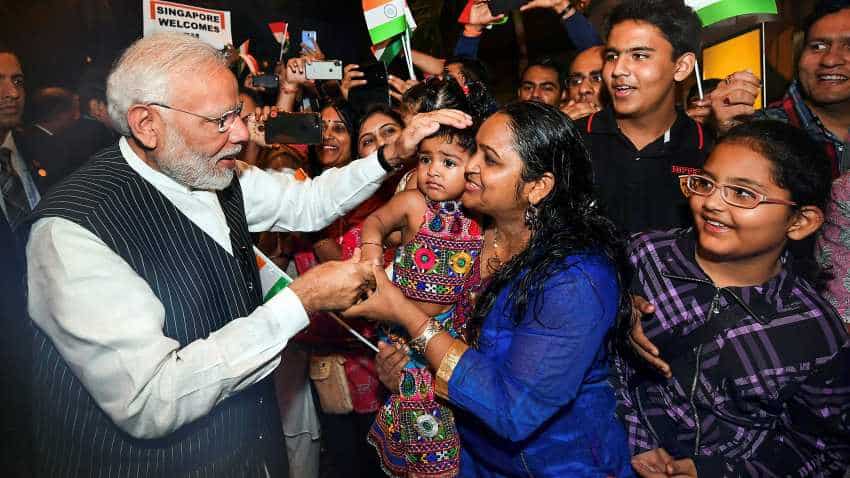 Singapore: Prime Minister Narendra Modi is greeted by members of the Indian community on his arrival, in Singapore, Wednesday, November 14, 2018. (PIB Photo via PTI)
Written By: ZeeBiz WebTeam
RELATED NEWS

India has witnessed a number of changes in the last few years, thanks to technology and some of the big steps taken by the government. Prime Minister Narendra Modi on Wednesday said that three developments - all numbering in over a billion each - have placed India in a unique position, giving it the world's biggest public infrastructure. "So today, more than a billion biometric identities, more than a billion bank accounts and more than a billion cell phones give India by far the biggest public infrastructure in the world," PM Modi said while delivering the keynote address at Singpore Fintech Festival . "With the power of fintech and the reach of digital connectivity, we have started a revolution of unprecedented speed and scale," he said further.

Prime minister Modi listed some of the big achievements of his government:

- To begin with financial inclusion has become a reality for 1.3 billion Indians. We have generated more than 1.2 billion biometric identities – called Aadhaar or foundation - in just a few years.

- With our Jan DhanYojana, we aimed to give a bank account to every Indian. In three years, we have opened 330 million new bank accounts.These are 330 million sources of identity, dignity and opportunities.

- Less than 50 percent of Indians had bank accounts in 2014; now, it is nearly universal.

- More than Rupees 3.6 lakh crore, or 50 billion dollars of benefits from government have reached the people directly.

- No longer must a poor citizen in a remote village travel long distances or pay off middle-men to get her rights.

- No longer can fake and duplicate accounts bleed government finances. We have saved over Rupees 80,000 crore, or 12 billion dollars in prevented leakages.

- Banking has come to doorsteps even in remote villages through 400,000 micro ATMs based on Aadhaar.

- Digital infrastructure has helped launch the world's largest healthcare scheme this year. 'Ayushman' will provide affordable health insurance to 500 million Indians. It has also helped us extend 145 million loans for small entrepreneurs through Mudra scheme. In four years, they amount to Rupees 6.5 lakh crore, or 90 billion dollars. Nearly 75 percent of these loans have gone to women.

- Over 150 thousand post offices across India and 300,000 postal service employees are using technology to provide house to house banking.

- More than 120,000 village councils in India have already been connected by nearly 300,000 kilometres of fibre optic cables. Over 300,000 Common Service Centres have brought digital access to villages.

- RuPay is bringing payment cards within the reach of all.Over 250 million of these are with those who did not have a bank account 4 years ago.

- From cards to QRs and wallets, digital transactions in India are growing rapidly. Today, 128 banks in India are connected to UPI. Transactions on UPI grew 1500 times in the last 24 months. Every month, the value of transaction is growing by over 30 percent.

"In short, the Indian story shows six great benefits of fintech: Access ,inclusion; connectivity; ease of living; opportunity; and, accountability. Across the world, from the Indo-Pacific to Africa to Latin America, we see inspiring stories of extraordinary innovation changing ordinary lives.
But, there is much to be done," the PM said.