Pan India Bus strike: The All India Motor Transport Congress (AIMTC) has called for a nationwide ‘ chakka  jam’ on Friday to kick off an indefinite strike to protest rising diesel prices, among other things. 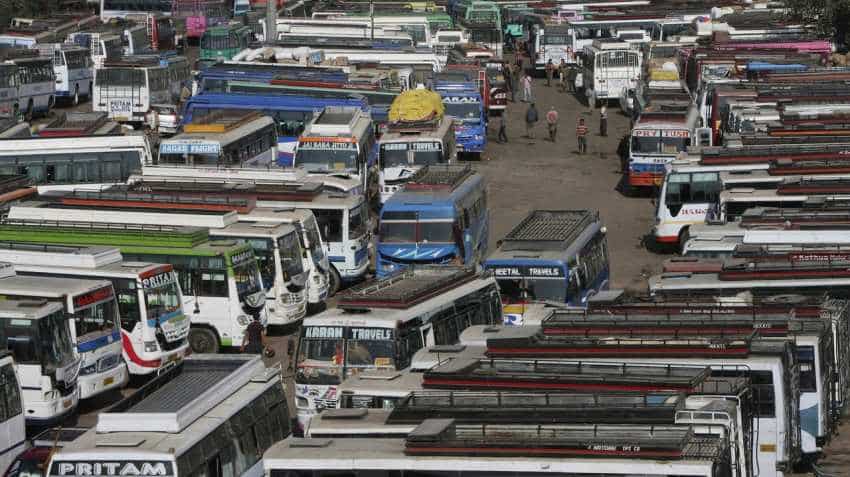 The All India Motor Transport Congress (AIMTC) has called for a nationwide ‘chakka jam’ on Friday. Image source: AFP
Written By: ZeeBiz WebTeam

Pan India Bus strike: The All India Motor Transport Congress (AIMTC) has called for a nationwide ‘chakka jam’ on Friday to kick off an indefinite strike to protest rising diesel prices, among other things. Private buses, school buses, interstate buses and tempos will also stay off roads as the State Bus and Company Owner’s Association (SBCOA) puts its weight behind the agitation, which will see participation from around 93 lakh truckers.

The strike begins at 6 am and is likely to affect businesses and industries the most, and result in a hike in commodity prices. Delivery of parcels will also be affected.

Transport operators are also demanding abolition of highway toll, TDS and some other taxes, and reduction in third party insurance.

They also want a national permit for tourist buses. The All India Confederation of Goods Vehicle Owners Association (ACOGOA) had called a strike on the same issues on June 18, but received poor response.

“The policies are not tuned to ground realities, which is leading to severe losses. By going on strike, we will suffer loses to the tune of Rs 4,000 crore every day,” said Singh.

State government has allowed state-owned buses to ferry goods during the strike period. It has also decided to form seven-member committees, led by collectors, in every district to keep vigil.

Of the 93 lakh protesting truckers, 16 lakh are from Maharashtra. The state has around 80,000 buses, including school buses. Around 60,000 heavy vehicles enter and exit Mumbai every day.

Most schools are not worried about the strike since school buses are joining in only for one day. “We can’t declare a holiday because of the strike,” said Dipshikha Srivastava, principal of Hansraj Morarji Public School in Andheri, “Parents can drop their children for one day. There are no exams so it won’t be problem even if some students skip school.”

Girija Mohan, Director of Chatrabhuj Narsee Memorial School inVile Parle, echoed the sentiment, saying, “The strike will not affect our school routine. Students can come on their own for a day.”