One of the most popular ministers in the first term of Narendra Modi government, Nitin Gadkari has retained Road Transport and Highways Ministry in PM's second term. 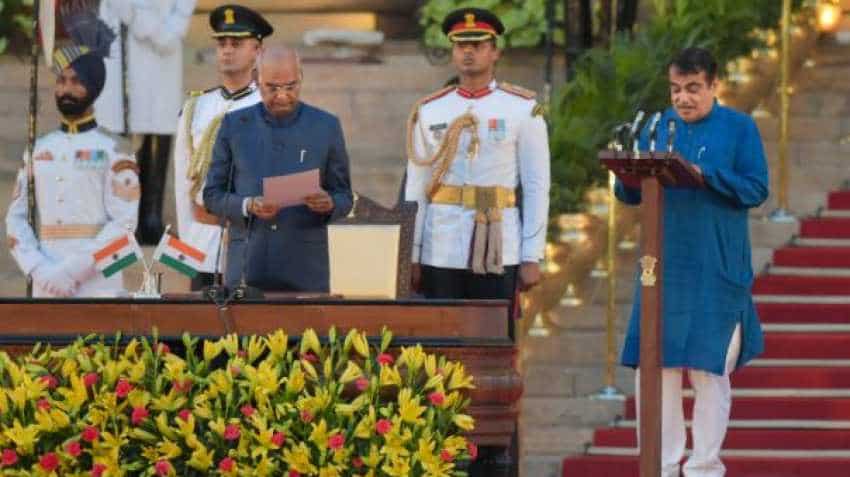 Nitin Gadkari being sworn-in as a Cabinet minister by President Ram Nath Kovind during the oath taking ceremony at the forecourt of Rashtrapati Bhawan in New Delhi, Thursday, May 30, 2019. (PTI Photo)

One of the most popular ministers in the first term of Narendra Modi government, Nitin Gadkari has retained Road Transport and Highways Ministry in PM's second term. Gadkari has also been given additional responsibility of spearheading the Ministry of Micro, Small and Medium Enterprises. The decision to give Gadkari the responsibility of MSME ministry comes in the wake of various challenges faced by the sector after demonetisation and roll out of Goods and Services Tax (GST). A former BJP president, Gadkari took oath as Cabinet Minister in the Narendra Modi government on Thursday. The Nagpur MP is known for his organisational skills. In the previous government, Gadkari kick-started languishing road projects and put highway development on fast track. He also revived private sector interest in the road sector through various innovative schemes.

Gadkari helped set up an efficient monitoring system across various levels, ensuring remarkable performance. With his efforts, the average highway construction surpassed previous records and set a new benchmark in the previous term. Some of the signature projects that were completed in the previous term included two-laned 9-km long tunnel on Chennai-Nashri section of NH-1A, Dhola Sadia Bridge, Narmada Bridge, New Brahmaputra Bridge and Eastern Peripheral Expressway. An innovative Hybrid Annuity Model (HAM) and Toll-Operate-Transfer (TOT) were rolled out. Both have seen remarkable success.

Gadkari is known for bringing out-of-box ideas and implementing some of them.

Nitin Gadkari (62) is a self-made politician-cum-businessman from Nagpur in eastern Maharashtra. He had started his political career with the ABVP and BJYM wings of the RSS and BJP respectively. Gadkari had joined the BJP and later became a minister in Maharashtra's first opposition Shiv Sena-BJP government headed by Manohar Joshi during 1995-1999.
Gadkari enjoys excellent personal rapport with leaders of all parties. In Maharashtra, he gained fame by becoming the moving spirit behind the hundreds of flyovers, roads, state and national highways, including the Mumbai-Pune Expressway. Gadkari had occupied several positions in Maharashtra, including state BJP president and Leader of the Opposition. In 2009, Gadkari was elected the BJP President. He held the top BJP post till 2013.