A central team visited Kerala`s Kozhikode district on Sunday, where a 12-year-old boy died after getting infected by Nipah and collected samples of Rambutan fruits from the nearby vicinity to identify the source of infection. 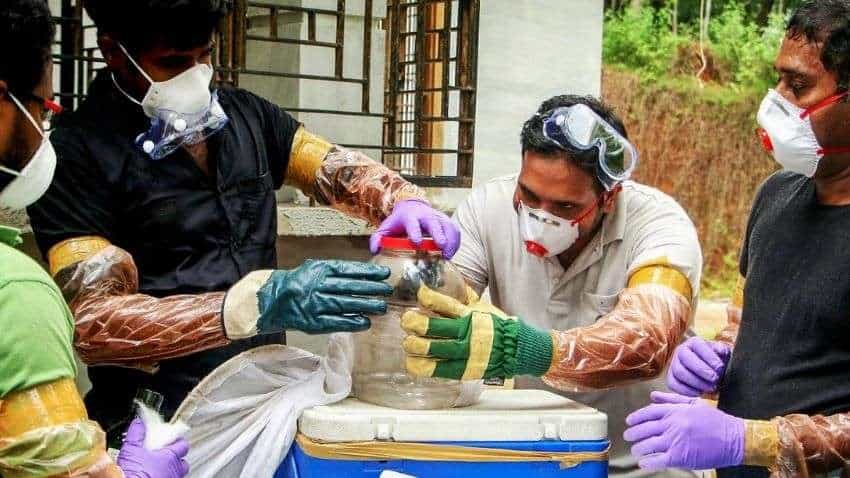 Nipah Virus Kerala Update: A central team visited Kerala`s Kozhikode district on Sunday, where a 12-year-old boy died after getting infected by Nipah and collected samples of Rambutan fruits from the nearby vicinity to identify the source of infection.

According to the World Health Organisation (WHO), Nipah Virus is caused by fruit bats and is potentially fatal to humans as well as animals.

Along with respiratory illness, it is also known to cause fever, muscular pain, headache, fever, dizziness, and nausea.

The team also questioned the family and those close with the deceased to identify the food he consumed and the animals he may have come in contact with.

Further, the team also advised everyone to be extra vigilant and inform health professionals as soon as possible if they have similar symptoms.

The Central team directly instructed the locals on the protocol to be followed in the homes and surroundings.

Strict protocols have been imposed within a three-kilometre radius of the Nipah victim`s house.

The statement said these areas have been declared as containment zone, and similar cautionary steps are issued in nearby areas of Kozhikode district, Malappuram and Kannur districts.

Earlier on Sunday, the Central government had rushed a public health team to the Kozhikode district of Kerala as the state reported the first death due to the Nipah virus.

To provide technical support to the state, a team of the National Centre for Disease Control (NCDC) has been rushed to the state.

Kerala Health Minister, Veena George on Saturday said, "National Institute of Virology (NIV), Pune has confirmed a sample of a 12-year-old boy from Kerala has turned Nipah positive. The patient passed away on Sunday morning."

The minister further added, "Till now, no one from the family or other contacts of the 12-year-old has any symptoms."

Furthermore, the Centre has advised the locals to follow immediate public health measures including active case search in the family, families, village and areas with similar topography (especially Malappuram), active contact tracing (for any contacts) during the past 12 days.

The Centre has also called for a strict quarantine of the contacts and isolation of any suspects.

Collection and transportation of samples for lab testing.

Earlier in 2018 also, there was a Nipah outbreak in the Kozhikode and Malappuram districts of Kerala.

HSCAP Kerala Plus One Trial Allotment list 2021 RELEASED at hscap.kerala.gov.in, see how to CHECK and other DETAILS here