A slew of steps like shorter timelines for right-of-way and approvals, loan support from the NHAI for languishing projects, and termination of stuck projects and their subsequent re-awarding have resulted in decline in the high-risk highway projects, a Crisil report said. 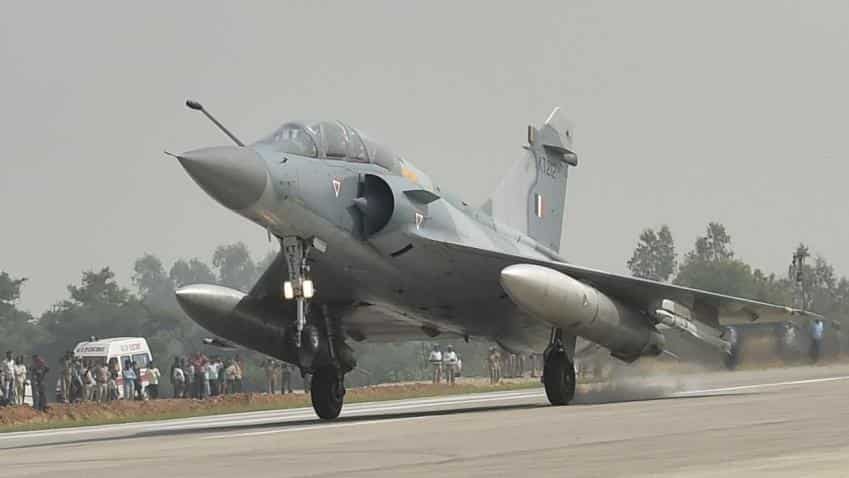 An IAF fighter aircraft lands on a stretch of the Lucknow-Agra Expressway. Image source: IANS

The proportion of under- construction high risk highway projects has dropped to 21 per cent from 53 per cent two years back on the back of various reforms such as loan support from the National Highways Authority of India (NHAI), rating agency Crisil said today.
A slew of steps such as shorter timelines for right-of-way and approvals, loan support from the NHAI for languishing projects, termination of stuck projects and their subsequent re-awarding, and affording a change in sponsor have resulted in decline in the proportion of under-construction, high-risk highway projects to 21 per cent, the report said.
It said at present only 2,000 km of the 9,400 km of highway projects under construction awarded by the NHAI on a build, operate and transfer (BOT) basis, are at high risk.
In the operational BOT portfolio, too, approvals for change in sponsor and subsequent refinancing, along with traffic growth, have yielded results, it added.
"About 80 per cent of the operational portfolio comprising nearly 100 BOT projects are at low risk today in terms of debt servicing," said Sachin Gupta, Senior Director, Crisil Ratings.
These projects have debt service coverage ratios greater than 1, or strong sponsors that can manage cash flow mismatches, he said.
A debt service coverage ratio above 1 means cash flows are more than enough for the debt maturing in a specific period.
CRISIL said apart from reduced risk, policy measures by the NHAI also resulted in a doubling of highway construction from 12 km per day in fiscal 2015 to 23 km in fiscal 2017.
The pace is expected to quicken to 40 km per day in the near-term, it said adding, the the awarding of contracts, led by the hybrid annuity (HAM) and toll-operate-transfer (TOT) models, is expected to sustain given the announcement and subsequent implementation of the Bharatmala project.
TOT is a new mode of project award initiated by NHAI, and segregates construction and demand risks. Once a project is completed, the tolling risk is passed on to investors and NHAI gets cash in lieu, which can then be reinvested to build more highways.
Crisil said given the improved ground situation, both debt and equity investors are showing more interest in the road sector, especially in operational assets.
Sushmita Majumdar, Director, Crisil Ratings said, "With stronger sponsors, lower risk and reduced interest costs, CRISIL believes as much as Rs 70,000 crore of debt can be refinanced through bonds or bank loans in the medium term."
Additionally, TOT projects could potentially securitise receivables worth Rs 40,000 crore, once awarded, he said.
The agency said in the past two years, Rs 10,000 crore of debt has already been refinanced through the corporate bond market, resulting in annual interest cost savings of 100-300 basis points for developers.