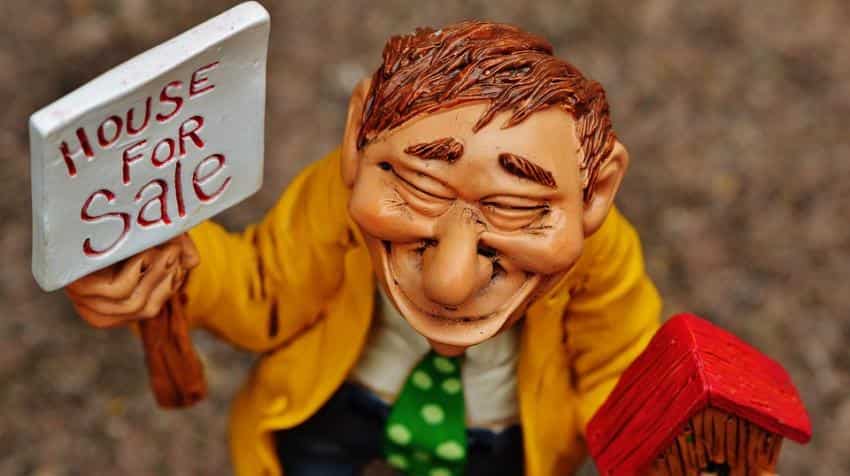 Though the government is trying best to give Real Estate industry a push with recent reforms, Goods and Service Tax (GST) and Real Estate (Regulation and Development) Act (RERA) coming into effect, the new launches are still lagging behind.

In the second quarter of 2017, the new home launches has dropped across eight cities to 17,858 units, a decline of 22% from 22,762 units in the previous quarter, a research report said.

According to a study by PropEquity, during Q2FY17, cities with significant inventory overhang have seen an improvement in new launches. NCR cities such as Gurgaon & Noida, along with other cities such as Mumbai and Bengaluru exhibit this trend. Southern cities like Hyderabad, Chennai showed dip in new launches irrespective of their inventory overhang.

Samir Jasuja, founder and CEO at PropEquity said, “Once GST and RERA are completely implemented, both the policies will provide the much needed transparency to the sector and trust amongst the buyers. These would collectively boost the market. Supply is expected to stay low for alteast 6-9 months as both RERA & GST will lead to implementation & compliance challenges for developers and also the authorities” .

Clearly, from the above table, Kolkata was the worst hit due to drop in new launches. According to the data, Kolkata saw a decline of 86% in new launches at 689 units as developers are still waiting for the market to improve.

"The unsold stock was recorded at 41,304, 6% less than the previous quarter. This is mainly because of less launches in this quarter. Situation might continue to stay the same since Kolkata is still suffering from the implications of currency demonetisation. Prices increased by 1% at Rs 3,785 psf," the report said.

After Kolkata, another city which was saw significant drop in new launches was Pune. The recent slowdown in Q2, led new launches fell by 57% at 2,361 units. Absorption fell by 3% while the prices mostly stagnant. Unsold stock inventory fell by 6% at 99,899 units. Prices remained same at Rs 4,623 psf, the study showed.

Third in the list was Hyderabad. During Q2 2017, Hyderabad witnessed a contraction in terms of new launches. It has decreased by 51% with only 1,566 units getting launched. As a result unsold Stock decreased by 5%. The absorption rate in this quarter slightly increased by 3% with 3,216 units sold when compared with 3,112 units from the previous quarter. Prices remained same at Rs 3,950 psf.

Fourth was Chennai, which suffered a major setback with a decrease in number of launches. The launches decreased by 37% and in overall only 1,703 units got launched. Prices remained same at Rs 5,100 psf, the study added.

Apart from these four cities, the rest four cities recovered from the stress caused due to demonetisation.

Gurgaon gained the most from the new launches. According to the study, the number of launches in this quarter in Gurgaon increased to 1,896 units from 227 units in the previous quarter. The increase recorded at 584% of new launches on a q-o-q comparison. Prices remained at the same level at Rs 6,507 psf. 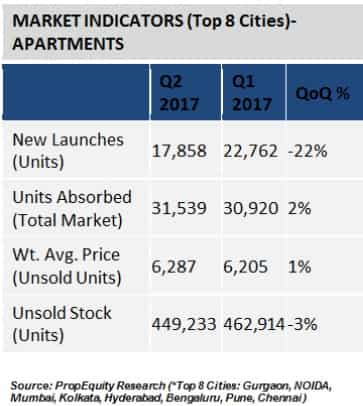 However, combining all the eight cities, the unsold inventory dipped slightly by 2% to 4,49,233 units from 4,62,914 units due to lower new launches and developers focusing on clearing their existing unsold inventories.