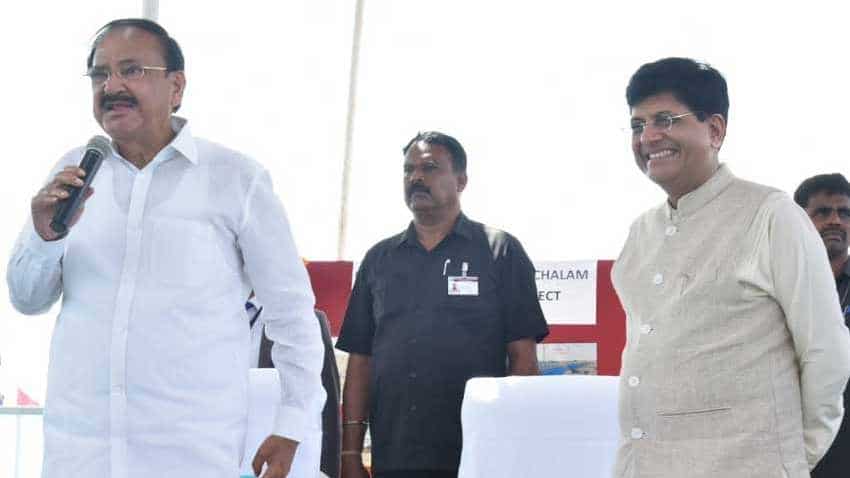 Venkaiah Naidu highlighted the iconic status of Nellore city and stated that the plan to redevelop Nellore Railway Station is in tune with the same.

Vice President of India Venkaiah Naidu today launched various rail developmental works and passenger amenities/facilities in the state of Andhra Pradesh at a function held at Nellore Railway Station today. Railway Minister Piyush Goyal was also present on the occasion. Speaking during the occasion, Venkaiah Naidu recollected how he envisaged the potential for connecting Krishnapatnam on rail network, which has proved right now, with freight traffic between the Port and various destinations towards Rayalaseema, Karnataka and beyond, substantially contributing to generate revenue for Railways. The new rail line will reduce distance between Venkatachalam and Obulavaripalli by 72 kms he informed.

The rail developmental works and passenger facilities launched are:

2. Laying of foundation stone for Provision of Passenger Amenities at all Railway Stations from Krishnapatnam to Rapuru (Part of Krishnapatnam-Obulavaripalli New Railway Lines Project).

4. Laying of foundation stone for redevelopment of Nellore Railway Station.

7. Dedication of Free High-Speed Wi-Fi facility at Nellore, Gudur and Renigunta Railway Stations to the Nation.

9. Dedication of New Foot Over Bridge and New Booking Office at Tiruvottiyur Railway Station to the Nation (via Remote Video Link).

10. Dedication of Subway in lieu of Level Crossing No.34 at Gummidipundi to the Nation (via Remote Video Link).

Stressing on the emotional connect he holds with Nellore, the Vice President stated that the day is significant because a host of rail works have taken off, including the rail connectivity to his birth place towards Rapuru.

Speaking on the rail developmental initiatives, he said that the new Railway line between Venkatachalam and Obulavaripalli and the existing Krishnapatnam-Venkatachalam connectivity will be the game changer for Railways in the region, on the strength of hugely enhancing freight traffic potential besides catering to the needs of rail users, upon introduction of passenger services soon.

Venkaiah Naidu highlighted the iconic status of Nellore city and stated that the plan to redevelop Nellore Railway Station is in tune with the same. The World Class project being taken up at a cost of Rs 147 crore, will herald the best in terms of design structure, aesthetics, safety and durability, making rail travel an elegant experience. The provision of free highspeed Wi-Fi services at Nellore, Gudur and Renigunta Railway Stations signify the needs of New India to stay digitally connected.

Piyush Goyal said that an amount of Rs 1830 crore is being spent for the new projects announced today. Responding to the suggestion of Vice President for a new Intercity train to connect Gudur with Vijayawada, the rail minister announced that the new day time train will be introduced shortly, once the Venkatachalam – Obulavaripalli new line is completed. The Minister pointed out the fast pace of rail infra works undertaken in Andhra Pradesh in the last four years, comparing the statistics with the previous years.

The rail minister also announced a slew of benefits for rail users, fulfilling the needs of various places, in Andhra Pradesh, which are: