Narendra Modi swearing-in ceremony Highlights: Narendra Modi took oath as Prime Minister for the second time with his new council of ministers at the Rashtrapati Bhavan today. Ahead of his swearing-in, Modi visited Raj Ghat, Mahatma Gandhi`s memorial, where he was accompanied by Union Minister Hardeep Singh Puri. 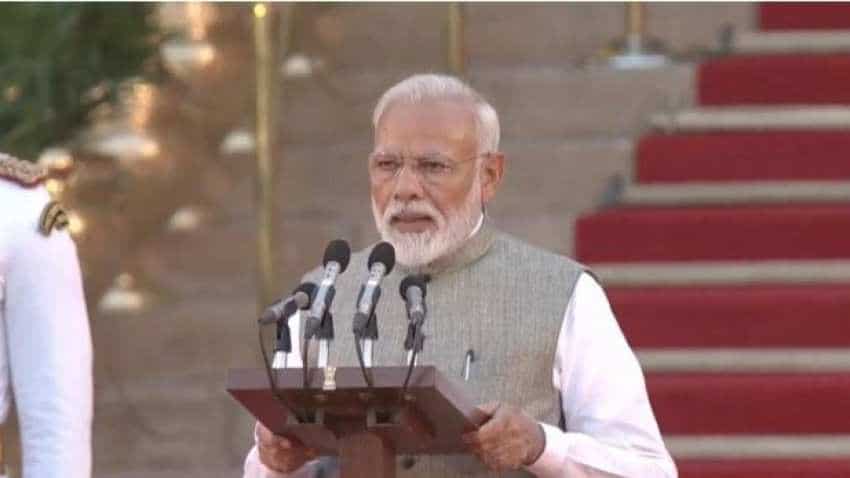 Narendra Modi takes oath as the Prime Minister of India for the second consecutive term at a swearing-in ceremony at Rashtrapati Bhavan in New Delhi on May 30, 2019. (Photo: IANS)

06.47pm: Bihar CM Nitish Kumar on JD(U) not joining Modi Cabinet: "They wanted only 1 person from JDU in the cabinet, so it would have been just a symbolic participation.We informed them that it is ok we don't need it. It is not a big issue, we are fully in NDA and not upset at all.We are working together, no confusion."

06.44 pm: Big news! Reports say Sushma Swaraj may not be included in Modi cabinet. She may not take oath today 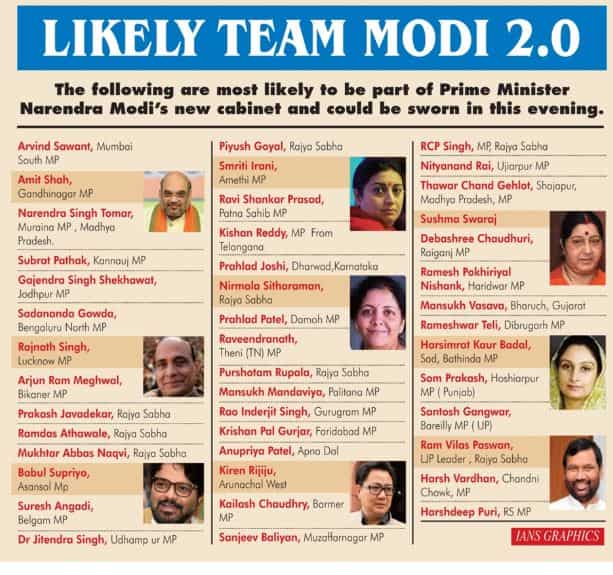 05.55 pm: Several A-listers of Indian film industry such as Karan Johar, Rajinikanth, Boney Kapoor and Kangana Ranaut are expected to attend Prime Minister Narendra Modi's swearing-in ceremony on Thursday. Sidharth Roy Kapur, President of the Film and Television Producers Guild of India, and actor Shahid Kapoor have confirmed that they will be present for the event.

05.27 pm: Trai Chairman R S Sharma exudes confidence that the new government will work with "renewed vigour" to accelerate reforms in the telecom sector with sharp focus on 5G roll-out and the implementation of the new telecom policy. Sharma said it is for the government to take a call on its priorities for the sector but added that he sees an accelerated implementation of various provisions of the National Digital Communications Policy (NDCP). PTI

I wish to thank all the PTs who tweeted and expressed their heartfelt wish for me to become FM. But as I said from the beginning that it is the PM who decides finally and we should respect that since the buck stops with him.

05.07 pm: BJP president Amit Shah is all set to join the Narendra Modi cabinet, according to a congratulatory message by Gujarat BJP chief Jitu Vaghani Thursday on his inclusion. Vaghani's tweet ended speculation over Shah joining the government. Modi and his new team of ministers will be sworn in at 7 p.m.

04.33 pm: Actor Jitendra on PM Modi swearing-in: "It's a historic moment. I'm a big follower of Modi Ji and an ardent fan. I think the country is in good hands. I am so happy for my countrymen and happy for myself to be here today." 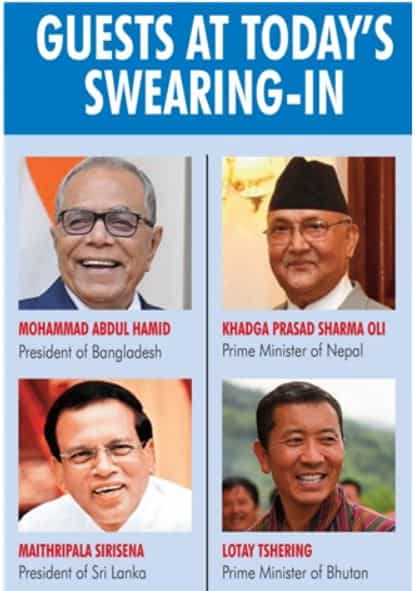 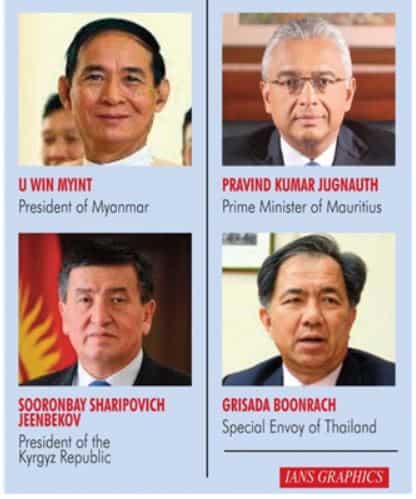 03.34 pm: Shripad Yesso Naik, BJP, to be inducted in Modi Cabinet: "I want to thank the Prime Minister and Party President Amit Shah for again giving me a chance of serving the country by making me a part of the government. I have been invited to the oath-taking ceremony, not been informed of the ministry yet."

02.19 pm: Santosh Gangwar, BJP, denies reports of him becoming protem speaker of 17th Lok Sabha: "I can't be the Pro-tem Speaker after becoming a Minister. Someone else will get that post. I will carry out whatever responsibility will be given to me."

02.05PM: Arjun Ram Meghwal, BJP, reacts after getting call from PMO: "I thank the PM & Amit Shah ji for showing trust in me. I thank them on behalf of the people of Bikaner. PM's vision will be significant for India. He had said that we want to remove our tag of developing nation & make India a developed nation." 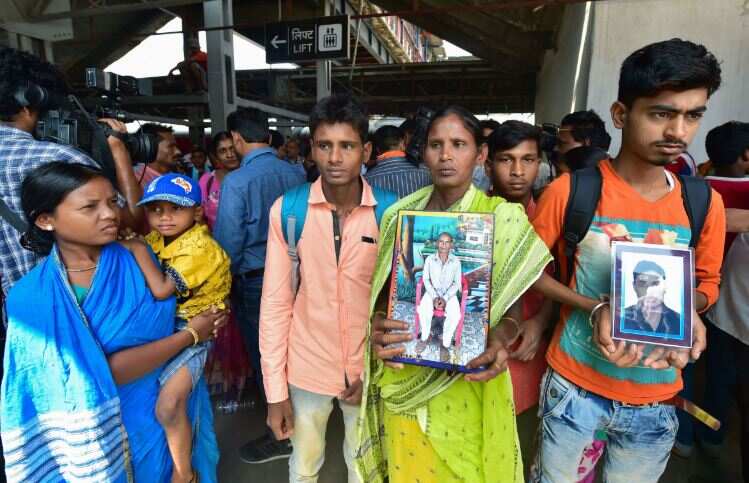 01.41 pm: The family members of over 40 BJP workers, who were killed in political violence in West Bengal in the last one year, arrive at New Delhi Railway Station, in New Delhi, Thursday, May 30, 2019. The kins have been invited for the swearing-in of Narendra Modi as the Prime Minister for a second time. (PTI image)

01.32 pm: Film director Rakeysh Omprakash Mehra to attend PM Modi's swearing-in. He said, "It's a very important day for India & the people of the country. I am extremely fortunate to be a part of this ceremony. We should not have false expectation from anybody or ourselves. We should keep doing our job putting right foot forward."

01.22 pm; Mansukh Lal Mandaviya to join Modi Cabinet 2.0. He will go for swearing-in on a bicycle.

12.33 pm: Sources tell Zee Media the confirmed names who have got a call from the PMO for joining the Modi Cabinet 2.0. Here are they:

12.32 pm: Republican Party of India leader, Ramdas Athawale is likely to be inducted in Modi Cabinet list. Earlier he told ANI, "I believe that Modi Ji will consider me to be a minister. I'm hopeful of getting a phone call regarding it today. Names of Ram Vilas Paswan, Anupriya Patel and Arvind Sawant have come, I think I will also get a chance to serve the nation."

12:16 PM: Sources have confirmed PTI that ministers selected for oath of office will meet Prime Minister Narendra Modi at 4:30 pm today at his residence. Around that time we will start having a clear picture of who all will be part of the new cabinet.

12:10 PM: President of Sri Lanka, Maithripala Sirisena, has also arrived in Delhi to attend the ceremony.

11:16 AM: Market expert Ajay Bagga told Zee Busines TV that Amit Shah's appointment as Finance minister will confirm his status as the second most important person in the government. "If Amit Shah is given Ministry of Finance, it will be clear that he is the second most important person in the government. He has been a banker and been associated with financial services for 30 years now, so he has the experience. But, there are some reports claiming that he has an important role to play in the party. So, things will be clear by evening," Bagga said.

11:02 AM: The BJP has claimed that Mamata was looking for "excuses" to avoid attending the event. "She got an excuse (for not attending). The decision to invite the kin of BJP workers was of the state unit. The kin were asked if they wished to attend, they can. They expressed their desire to come hence they were invited," BJP General Secretary and West Bengal in-charge Kailash Vijayvargiya said at a press conference.

10:43 AM: Ending all speculations, Arun Jaitley has asked Prime Minister Narendra Modi not to give him a ministerial position in the new government due to ongoing health problems. Jaitley's absence will leave Modi without one of his most important lieutenants as he begins his second five-year term in power following the Bharatiya Janata Party`s landslide election victory earlier this month. Sources have told Zee Business TV that BJP chief Amit Shah can be given the finance ministry instead.

I have today written a letter to the Hon’ble Prime Minister, a copy of which I am releasing: pic.twitter.com/8GyVNDcpU7

10:30 AM: For the oath-taking ceremony of Prime Minister Narendra Modi and his team of ministers, Delhi police is deploying around 5,000 personnel in the New Delhi area. The national capital will also be watched by the National Security Guard (NSG) during the swearing-in ceremony on Thursday, a senior police officer said. According to the police, the New Delhi district has been divided into six zones with each zone being monitored by a DCP-rank officer. The officer will not only ensure security but will also make sure that the normal traffic is not affected by the VVIP movement.