When and where to watch PM Narendra Modi address to the nation on Jammu and Kashmir; Live Streaming 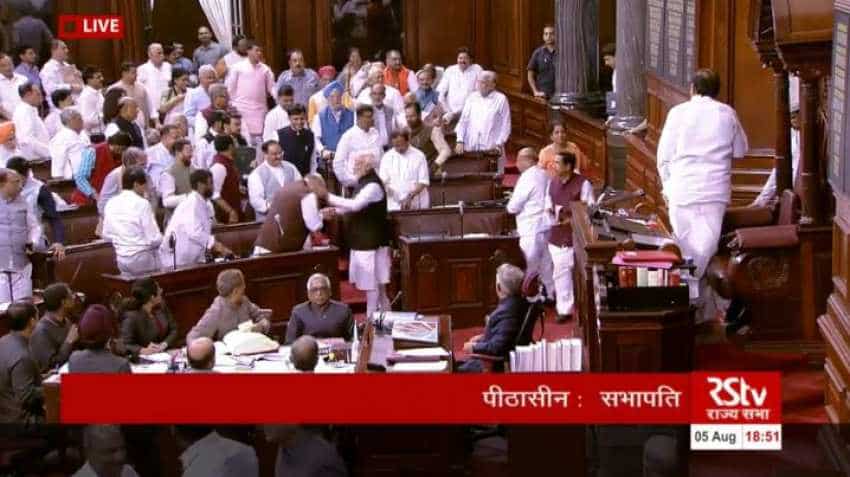 Prime Minister Narendra Modi will address the nation in a special television broadcast at 8.00 m today. Earlier in the day, All India Radio had informed in a tweet today that the special broadcast may start at 4 pm. The AIR, however, deleted the tweet later. There is no official confirmation about the timing of PM's address now. The prime minister's address to the nation may come two days after Home Minister Amit Shah introduced proposals in the Parliament for the removal of provisions of Article 370 (via a presidential order) and bifurcation of Jammu and Kashmir state into two union territories. The proposals were passed by both Houses of the Parliament.

You can watch the broadcast of PM Modi's address to the nation via Zee News and Zee Business TV from 8 pm today.

Commenting on the historic developments, PM Modi had earlier posted a series of tweets in multiple languages to reach out to the people of Jammu and Kashmir and rest of India.

"I salute my sisters and brothers of Jammu, Kashmir and Ladakh for their courage and resilience. For years, vested interest groups who believed in emotional blackmail never cared for people’s empowerment. J&K is now free from their shackles. A new dawn, better tomorrow awaits!," PM Modi had tweeted.

The Bills pertaining to Jammu, Kashmir and Ladakh will ensure integration and empowerment. These steps will bring the youth into the mainstream and give them innumerable opportunities to showcase their skills and talents. Local infrastructure will significantly improve. Special congratulations to the people of Ladakh! It is a matter of great joy that their long-standing demand of being declared a Union Territory has been fulfilled. This decision will give impetus to the overall prosperity of the region and ensure better developmental facilities," PM said, adding, "The prime minister further said: "The passage of key Bills pertaining to Jammu, Kashmir and Ladakh are a fitting tribute to the great Sardar Patel, who worked for India’s unity, Dr. Babasaheb Ambedkar, whose views are well known and Dr. SP Mookerjee who devoted his life for India’s unity and integrity."

"In Parliament, political parties rose to the occasion, overcame ideological differences and took part in a rich debate that increased the pride of our Parliamentary democracy. For that, I congratulate all MPs, various political parties and their leaders. People of Jammu, Kashmir and Ladakh would be proud that MPs overcame differences and discussed the future of these regions as well as ensuring peace, progress and prosperity there. The widespread support can be clearly seen in the final numbers, 125:61 in RS and 370:70 in LS," PM Modi said.

Explainer: What happens if the U.S. election is contested?