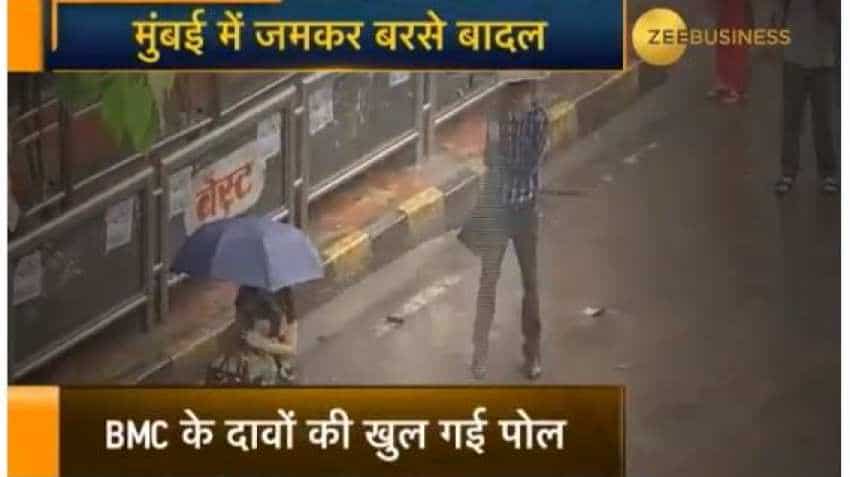 Movement of local trains was also hit, and air traffic was also affected. On Friday, some flight were delayed and path of few flights was also changed. Image source: Zee Business

First monsoon showers on Friday have brought havoc for Mumbai as heavy rains lashed the city and its neighbouring areas experienced hardships for the second consecutive day today. The rains have also affected the normal life in the city, and at least four persons have lost their lives at different places including one youth at Andheri and two more at Goregaon due to electricity, while an 8-year-old died in Palghar due to lightning, said a Zee Business TV report.

The report said heavy rains have also exposed the claims of Mumbai Municipal Corporation as in Navi Mumbai waterlogging was seen and at Railway station water started flowing through the shed. In Andheri, water logging reached upto 1-2 feet affected normal movement of traffic, while traffic at Martunga police station was too slow due to the same reason, while areas like Kula, Santakruz, and King Circle also bore the brunt, it said.

Heavy traffic was witnessed at Kandiwali, while traffic movement affected at Bandra Sealink, Western Express highway and Andheri link road, the report said, adding that movement of local trains was also hit, and air traffic was also affected. On Friday, some flight were delayed and path of few flights was also changed, it added.

Indian Meteorological Department (IMD) in its daily bulletin has predicted “Very active monsoon conditions over the west coast, with deep westerlies. Heavy rainfall expected in Mumbai, Thane and around the west coast.” IMD’s Santacruz station recorded rainfall of 139.9 mm between 8.30 am and 5.30 pm, Colaba received 26.1 mm of rainfall, while other areas that witnessed heavy rainfall during this period were Ghatkopar (280.80 mm), Powai (164 mm) and BKC-East (147.40 mm).

Meanwhile, Skymet Weather has stated that weather activities are expected to subside by July 5, and the intensity of rain will also be reduced over entire Maharashtra by that time.