Monsoon mayhem: Travelling in these Maharashtra regions this week? Check weather forecast - From Thane to Mumbai

Mumbaikars, as well as those headed to Maharashtra, before travelling, must first check about rail, road and flight delays, which are expected to stay throughout the day. 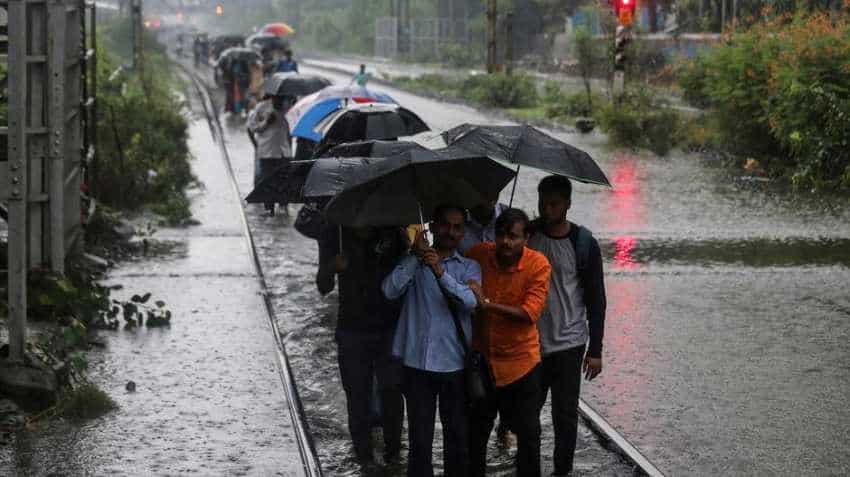 From Sunday midnight, heavy rains took a toll on not just Mumbai but many other regions of Maharashtra. Photo: Reuters
Written By: ZeeBiz WebTeam
Edited By: Harish Dugh
RELATED NEWS

Once again the city of Mumbai has disrupted by the Monsoon with water logging present in a number of areas, trains running slow and flights getting delayed at Chhatrapati Shivaji International Airport. From Sunday midnight, heavy rains took a toll on not just Mumbai but many other regions of Maharashtra. By the time Monday morning kicked off, the state had already witnessed heavy rains, so much so that Mumbai recorded three-digit rainfall. However, things can get worse as prediction is of a possible cyclone forming off the coast of Gujarat. While there is also active off-shore trough along Konkan and Goa.

On Monday, a Mumbai International Airport Ltd. spokesperson said that on account of fluctuating visibility issues, there were no flight movements for at least 20 minutes till 9.31 a.m, reported by IANS. Further it was known that, although there were no cancellations, at least three flights were diverted to other airports, five go-arounds and delays of 30-45 minutes.

Mumbaikars, as well as those headed to Maharashtra, before travelling, must first check about rail, road and flight delays, which are expected to stay throughout the day. Here’s the entire weather forecast for the state which can help citizens prepare better if they have to travel.

Skymet said, “Moderate to heavy rains have been lashing parts of Konkan and Goa as well as Madhya Maharashtra since the last 24 hours. While the other two meteorological divisions such as Vidarbha and Marathwada observed light to moderate rains.

According to the data available with Skymet, Mahabaleshwar has recorded 136 mm of rainfall, followed by Matheran 71 mm, Nashik 66 mm and Colaba (Mumbai) 54 mm of rainfall, in the last 24 hours, from 8:30 am on Sunday.

While, the national forecaster India Meteorological Department (IMD) said, “Due to active monsoon conditions, entire Konkan coast is experiencing an intense spell of rainfall. Monsoon remained widespread vigorous over the entire North Konkan belt, including Mumbai with heavy to very rainfall over most places. The 24 hr (0830-0830hrs) rainfall in Mumbai and around, based on the 8.30 hrs observations of 8th July 2019 are as follows: LOCATIONS Rainfall.”

"Rains have not taken rest since last night, in fact, Mumbai rains took vigorous turn on Monday morning. The reason for ongoing rains can be attributed to the active off-shore trough along Konkan and Goa. Moreover, a Cyclonic Circulation is marked over South Gujarat," added Skymet.

For this week, here’s how much rain you can expect in your region, as per IMD. 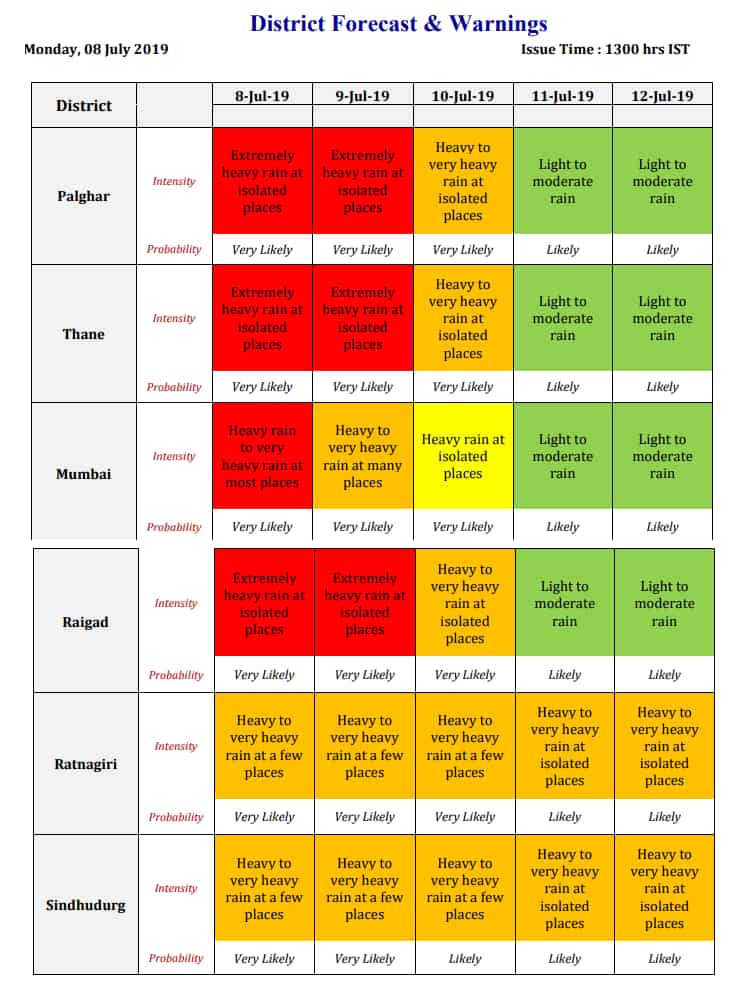 IMD has warned fishermen in coastal areas, saying, “Rough to very rough sea conditions likely to prevail along Maharashtra & Goa Coast.” It added, “Fishermen are advised not to venture into sea off Maharashtra & Goa coast during next 48 hours.”

Meanwhile, Skymet believes there are chances that the city of Mumbai may receive moderate spells of rain along with one or two heavy spells during the next 48 hours, however, these heavy spells will last only for two to three hours.

Further June 11 onward, Skymet says, "we expect a significant decrease in rainfall activities over Vidarbha, Marathwada and Madhya Maharashtra. Similarly, the intensity of rain will go down over Konkan and Goa, however, a few moderate spells may continue."

By this time, according to Skymet, the rain intensity over Mumbai will decrease significantly, however, the city may witness short spells of occasional intense rains. Overall, we can say that good rains going over parts of Maharashtra will taper after July 10.