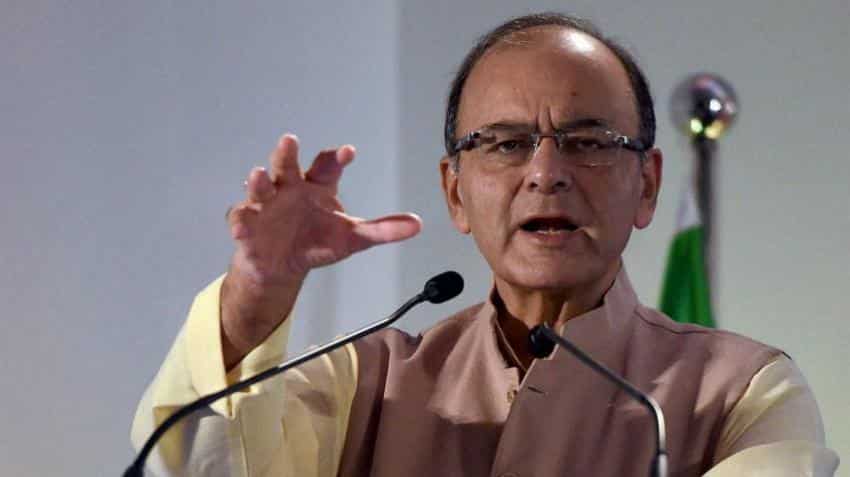 The revised draft of model GST law, which was made public in November 2016, provides for a maximum rate of tax under the new regime at 14%. Photo of Finance Minister, Arun Jaitley. Image Source: PTI/File Photo
Written By: PTI
RELATED NEWS

The GST Council has proposed to raise the peak tax rate to 20%, from the current 14%, in the model goods and services tax Bill to preclude the requirement of approaching Parliament for any change in rates in future.

The change in the peak rate will not alter the 4-slab rate structure of 5, 12, 18 and 28% agreed upon last year, but is only a provision being built into the model law to take care of contingencies in future, two officials in the know told PTI.

The revised draft of model GST law, which was made public in November 2016, provides for a maximum rate of tax under the new regime at 14% (14 % central GST and an equal state GST, taking the total to 28%).

"There shall be levied a tax called the central/state goods and services tax (CGST/SGST) on all intra-state supplies of goods and/or services... At such rates as may be notified by the central/state government... But not exceeding 14 % on the recommendation of the Council and collected in such manner as may be prescribed," the draft law states.

The GST Council, headed by Finance Minister Arun Jaitley and comprising representatives of all states, has agreed to keep the upper band of the rate in the law at 20 %.

"For the moment, we will not tinker with the rate structure of 5, 12, 18 and 28%. The GST Council has decided to keep the upper cap higher at 20% so that in future in case of need to hike tax rate, there is no need to approach Parliament for a nod and the GST Council can raise it," the officials said.

This means the central GST and state GST can be up to 20 % each, leaving the scope for a maximum levy at 40%.

"The 4-tier rate structure that has been decided will hold for now. By keeping the upper cap at 20 %, we are just keeping an enabling provision which the Council can exercise at a later date after deliberation," the official added.

Mirroring the model GST law, the CGST, SGST and UTGST law will be firmed up by the Centre, states and Union Territories, respectively.

The Centre plans to introduce in Parliament the Central GST (CGST) Bill in the forthcoming session beginning March 9.

After it is ratified, the states will introduce the State GST (SGST) Bill in their respective legislative Assemblies.

The central and state officials will soon start the exercise to determine which goods and services should fall in which tax bracket and the same will be taken to the Council for approval soon.

Together with this, they will also decide the goods and services that would attract a cess on top of the peak rate to create a corpus that can be used for compensating states for any loss of revenue from implementation of GST in the first five years.

The government is looking at GST rollout from July 1.