Air travellers stuck at 'arrivals' in Mumbai airport due to unrest in the city. 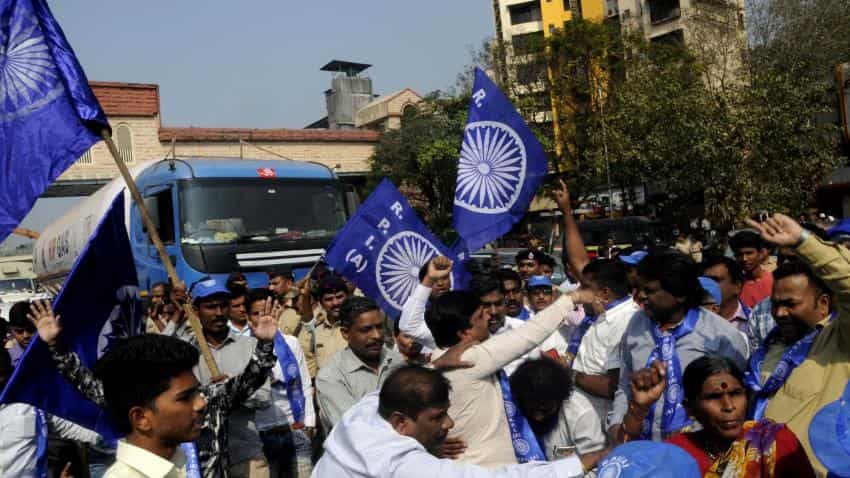 RPI activists stage a road blockade in Mumbai a day after violence erupted in the village of Koregaon-Bhima. Image Sourcde: IANS
Written By: ZeeBiz WebTeam

Passengers arriving into Mumbai airport have been stranded on account of the ongoing protests in the city. An airport official said that majority of the travellers were choosing to stay at the airport instead of venturing out, as per a Bloomberg report.

The Mumbai airport official commented via text message, while asking not to be identified citing rules.

Civil protests in parts of Mumbai’s suburbs were being held that has affected rail and taxi services.

Train services near Thane and Ghatkopar were halted by a group of protestors however they resumed once police intervened.

The AC local train in Mumbai was reportedly suspended for the rest of the day amid protests. Other suburban train services were being run amid intermittent protests at Elphinstone Road, Goregaon, Dadar, Malad. There is no cancellation of Long Distance trains, ANI tweeted.

BEST busses and cars were vandalised in Powai while metro services in Mumbai running between Asalfa and Ghatkopar stations were stopped by protestors.

Airlines like Jet Airways, IndiGo and Air India waived the cancellation fee including fare difference if any, for those who could not make it to the airport on January 3 and 2.

A Maharashtra bandh was called by Prakash Ambedkar, the Bharipa Bahujan Mahasangh leader and grandson of BR Ambedkar, on Wednesday to protest against the government's "failure" to stop the violence.

In an event to mark 200th anniversary of the Bhima Koregaon battle in Pune district, where the British Army comprising Dalit Mahars had defeated the Peshwas, left a man dead in Pune, Maharashtra.

Stone pelting was also reported in Aurangabad, along with vehicles that have been vandalised, ANI tweeted.