M Karunanidhi passes away: DMK president breathes his last at 94 in Chennai hospital

Karunanidhi, who has been the Chief Minister of Tamil Nadu five times, was admitted to Kauvery Hospital on July 28, following a dip in blood pressure, which stabilised following medical intervention. 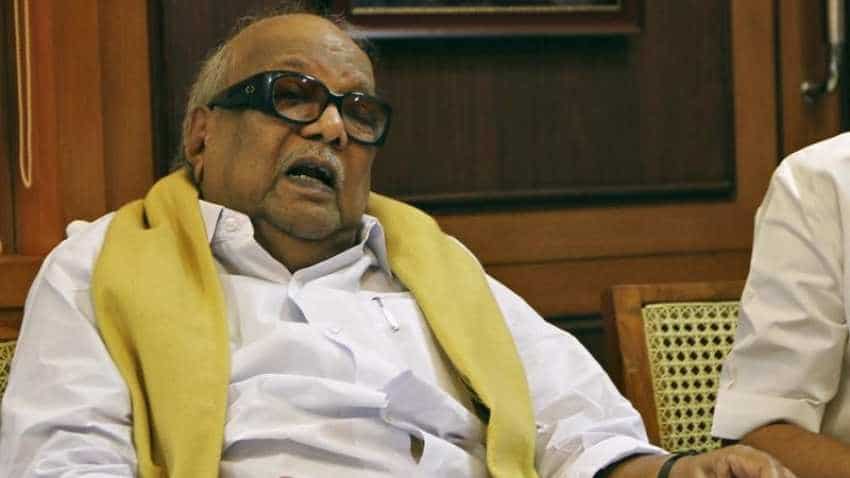 DMK president M Karunanidhi breathed his last at Kauvery Hospital in Chennai today. Earlier, a hospital statement said, "There has been significant decline in the clinical condition of Karunanidhi over the last few hours. Despite maximum medical support, his vital organ functions continue to deteriorate. His condition is extremely critical and unstable."

Kauvery hospital had said yesterday evening that Karunanidhi's condition had "declined" and keeping his vital organs functioning remained a "challenge", adding that the next 24 hours could be crucial.

Hundreds of DMK cadres collected outside the hospital in downtown Alwarpet and the crowd was swelling by the minute. Many were seen weeping and chanting slogans hailing the leader.

Security has been enhanced at the hospital and the Gopalapuram residence of the nonagenarian leader. A general alert was also sounded across the state, and security was stepped at major installations.

The 94-year-old Karunanidhi, who has been the Chief Minister of Tamil Nadu five times, was admitted to Kauvery Hospital on July 28, following a dip in blood pressure, which stabilised following medical intervention. However, the hospital on July 31 said that an extended stay could be necessary due to age-related overall decline in his general health, altered liver function and haematological parameters.

A host of dignitaries and political leaders, including President Ram Nath Kovind Vice President Venkaiah Naidu and Congress chief Rahul Gandhi visited the hospital over the last few days to inquire about the condition of the DMK veteran.