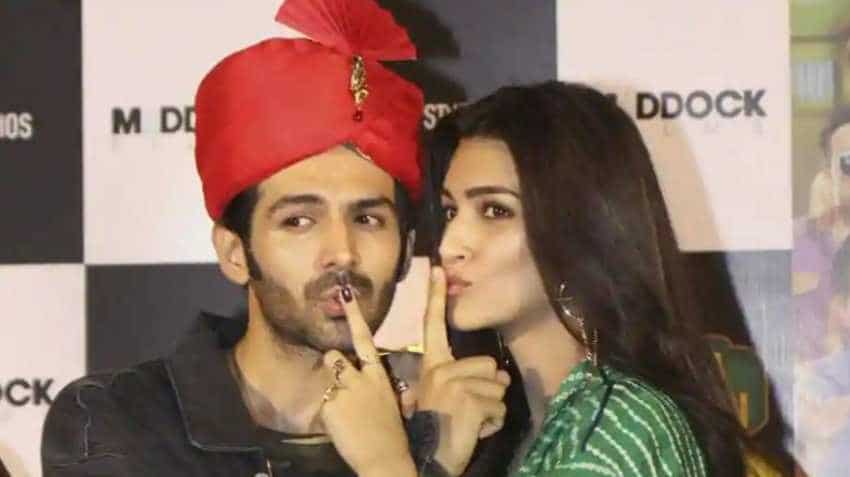 The film's budget is Rs 25 crore and will post a good business in coming weekends. PTI
Written By: ZeeBiz WebTeam
RELATED NEWS

Luka Chuppi Box Office Collection: Kartik Aaryan, Kriti Sanon starring Luka Chuppi picked up with a positive mood in theatres today. Directed by Laxman Utekar, the film is a story of a reporter who decides to go for a live in relationship with his partner but his family joins in too. The story is set in Mathura, Luka Chuppi features Pankaj Tripathi, Aparshakti Khurrana and Vinay Pathak, besides Kartik Aaryan and Kriti Sanon in lead. The reports suggest that Luka Chuppi has started with a decent note with a occupancy rate of a steady 25% during morning shows. While Sonchiriya, another realease on the same day has taken off on a relatively sluggish note with an occupancy rate of only 5%.

Luka Chuppi has released on 2100+ screens in the domestic market and the business of the film is expected to pick up as the weekend progresses.

While another recent release, Sonchiriya did not have any advance bookings and features a relatively lesser screen count of just 720 screens in the domestic market. However, It is expected to see more number of shows in future.

Film trade analyst, Sumit Kadel told zeebiz.com that the film is all set for a decent start. "The film will be released on around 2,100-2,200 screens in India. I expect the movie's first-day box office collection to remain around Rs 6 to 7 crore on its opening day," added Kadel.

The film's budget is Rs 25 crore and will post a good business in coming weekends.

Film trade analyst Taran Adarsh said the film will be released on 407 screens overseas. which takes the total to over 2,500 screens worldwide.