LPG, Kerosene prices to fall? Here’s what IOCL, BPCL, HPCL may do - Should you buy the stock?

“Low oil prices and stable INR are expected to pave the way for the next phase of reforms for the Oil Marketing Companies (OMCs),” say experts. 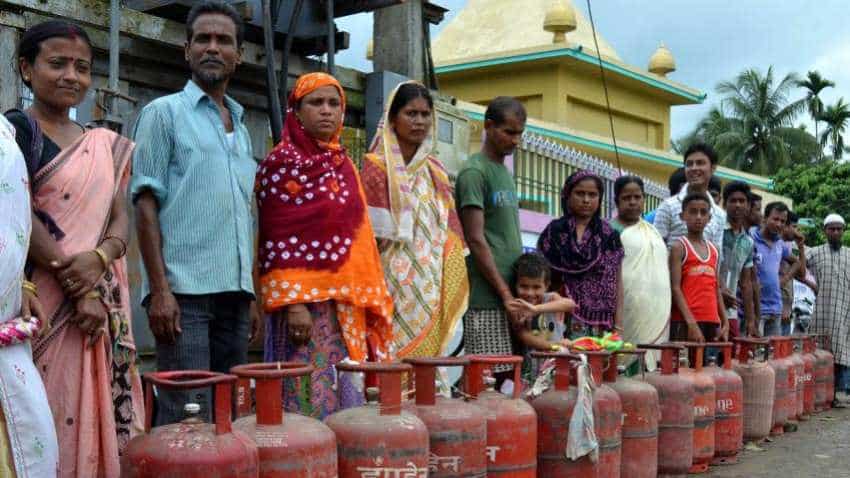 Step-wise deregulation in pricing of LPG and Kerosene can be reality. Photo: IANS

Notably, this will also work in favor of OMCs like Indian Oil, HPCL and BPCL. Such outlook is being derived on the back of lower crude oil prices and stable Indian rupee against dollar.

Swarnendu Bhushan and Sarfraz Bhimani Research Analyst at Motilal Oswal said, “Low oil prices and stable INR are expected to pave the way for the next phase of reforms for the Oil Marketing Companies (OMCs).”

Data compiled by the duo revealed that, due to the worsening fiscal situation, receivables from the government appears to have more than doubled YoY in FY19, with IOCL’s receivables rising from INR90b in FY18-end to INR190b in FY19-end.

With call on OPEC crude being lower than current production and lack of strong global economic growth, the duo expects  oil prices to likely range between USD60-70/bbl.

“Also, we expect low oil prices and the stable INR to result in the next phase of reforms for the OMCs — step-wise deregulation in pricing of LPG and Kerosene,” said Motilal analysts.

Deregulation of prices is not a new concept in oil and gas sector. Post deregulation of petrol in 2010, various efforts to amend pricing reforms in the sector took place, followed by deregulation of diesel in 2014. According to the Motilal analysts, a similar bigger pricing revolution was aligning daily domestic retail prices with global benchmark prices on a 15-day moving average.

Post the pricing reforms, OMCs saw a rise of ~50-90% in PBV during FY15-18; valuations were subdued next year (FY19), led by higher oil prices and INR depreciation. Now with low crude price outlook and stable INR, the analysts expect gradual de-regulation of LPG and Kerosene prices.

A basic knowledge of deregulation of price means that, this would create more competition and further lower prices for consumers of a particular product.

Which OMCs should you buy?

IOCL remains Motilal’s top pick among OMCs. As per these analysts, positives for IOCL are - (a) FY20-21 estimated free cash flow generation of INR23.6/share (~15% of the current market cap), (b) the polypropylene plant at Paradip is being commissioned, (c) 5mmtpa Ennore LNG terminal has already been commissioned with stabilization expected in FY20, and (d) dividend yield appears attractive at ~5%.

Key important factors for this OMC are - (a) the stabilization at Kochi refinery, and (b) possible Final Investment Decision for the prolific offshore Area 1 in Mozambique. The analysts said, “We raise our target PBV for BPCL from 1.8x to 1.9x, a discount of ~15% to FY15- 18, the discount being for the possible stabilization issues at Kochi. With a target price of INR479 (earlier: INR452), we reiterate Buy, implying ~24% upside to current market price.”

“We raise the PBV for HPCL from 1.2x to 1.3x, a discount of ~20% to average FY15-18 PBV of 1.6x due to: (a) capex on the Rajasthan refinery and HMEL petrochemical plant that could result in negative FCFF, and (b) execution risk with the Vizag expansion,” said the duo.

With a target price of INR338, the analysts have maintained Neutral on the stock, implying ~12% upside to the current market price.

No LPG subsidy to households, Rs 200 for Ujjwala beneficiaries; LPG price in Delhi to be Rs 1003

LPG gas cylinder price in December: Know rates you have to pay now for your cooking fuel after hike

After fuel, LPG, now CNG gets expensive; Will your taxi, auto ride hit your pocket next?