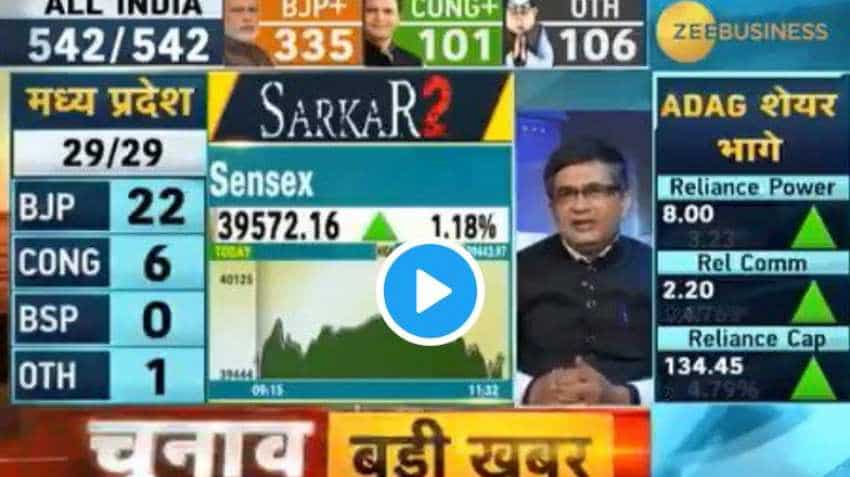 The Sensex managed to touch 40,000 mark due to faith people have in present government. The market behaves parallel to growth or degrowth of economy and overall the market is towards new highs.

Lok Sabha Elections 2019: The domestic stock markets witnessed an upside trend since opening bell today. The major indices, BSE Sensex and NSE Nifty50 surged to historical highs of 40,000 and 12,000 respectively. Ashish Chauhan, MD & CEO, BSE told Zee Business TV, ''The Sensex managed to touch 40,000 mark due to faith people have in present government. The market behaves parallel to growth or degrowth of economy and overall the market is towards new highs.''

However at 12.30 hrs the benchmark indices traded off record highs with Nifty below 11,800 level and Sensex at 39,467. The market witnessed a correction in the other half of trading session. Meanwhile, Indian rupee was trading flat at 69.67 per dollar against previous close 69.66.

NDA has so far done, maintaining a lead in 340 seats even as counting is going on. Notably, BJP alone has over 290 seats in its bag. The UPA is at 88 seats with Congress at 49 seats.

As far as stock market segments are concerned, there was pressure in sectors like FMCG and IT, while all other sectors were hovering in green.

Chauhan further added, The votes in these elections were towards continuity and stability in India. he added that the current scenario states that this time, the ruling party will bag more seats than 2014. The market will welcome the present government for next tenure and it is expected to continue to rally in the future.

However, the market will move on sighting of other factors like earnings risks, trade tensions between the US and China and a slowdown in Capex, which are some real worries that market has to deal with over the next 12 months.