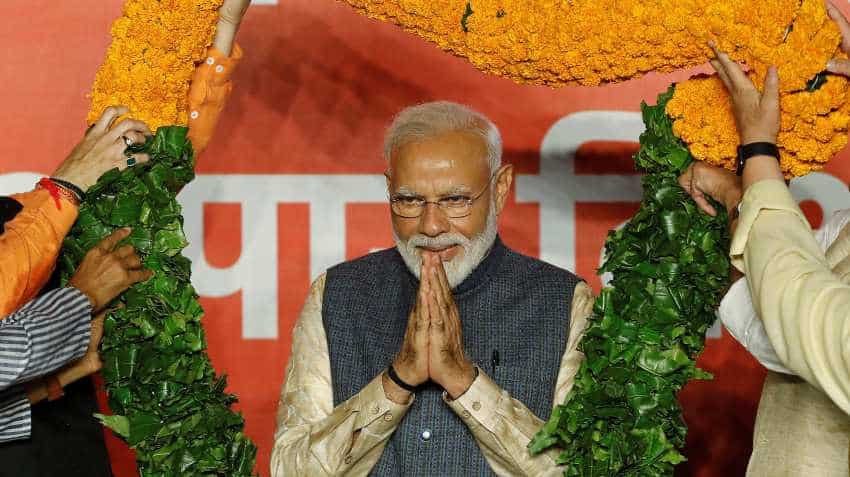 The current results have raised questions about Rahul Gandhi's leadership, who at a press conference, refused to address the issue, saying the party will hold a meeting on Friday to discuss the future. Image source: Reuters

Prime Minister Narendra Modi has led his Bharatiya Janata Party towards a super-sized victory for the second time, as his message of New India was wholeheartedly embraced by voters across large swathes of the country - Election Commission's partial vote count released showed that BJP will surpass its 2014 performance, and likely cross 300 seats. BJP has won 26 seats and was leading in 278 of the 542 Lok Sabha seats until 6 pm. After Jawaharlal Nehru and Indira Gandhi, Narendra Modi is the third prime minister of the country, and the first non-Congress one, who has been able to retain power for a second term with full majority in Lok Sabha. The other key highlights of the seven phased elections are given below.

1. The BJP under the leadership of Prime Minister Narendra Modi has virtually demolished the combined opposition, with the Congress Party bagging seven victories and a lead in 43 seats, according to the trends. Modi, however, is leading in Varanasi with a margin of over 4.3 lakh votes while party president Amit Shah was ahead in Gandhinagar in their home state of Gujarat by over 5.5 lakh votes.

2. On the the party's victory, Modi tweeted, "With all+ development for all+ everybody's confidence = victorious India," adding "Together we grow. Together we prosper. Together we will build a strong and inclusive India. India wins yet again."

3. It seems BJP's prediction of "ab ki baar 300 paar" is coming true, as Congress President Rahul Gandhi's campaign slogan of "chowkidar chor hai" failed to find any resonance among voters. In almost all the states where BJP won, its vote share was more than 50 percent.

4. The current results have raised questions about Rahul Gandhi's leadership and his party's future. At a press conference, he refused to address that issue, saying the party will hold a meeting on Friday to discuss the future.

"The people of India have decided that Narendra Modi will be the PM again and I fully respect it," he told reporters, and congratulated Modi and BJP. He said today is not the day to get into the cause of the defeat but to respect the will of the people.

5. Notably, if the trends continue till final results, the BJP and its NDA allies will likely end up with 344 seats, up from 336 in 2014. The BJP alone, which is now tantalisingly close to the 300 mark in Lok Sabha, had won 282 seats on its own in the last election.

6. Finance Minister Arun Jaitley said "aspirational India does not accept Royalties, Dynasties and caste based parties," while congratulating Modi and party workers "for achieving this miraculous win." He said the results are a ringing endorsement of Modi's popularity, his government's achievements in the last five years and his campaign, which centred around national security following the Balakot air strikes, nationalism and Hindutva.

7. In Uttar Pradesh, where the Samajwadi Party-Bahujan Samaj Party combine had posed a stiff challenge, the BJP had won two and was leading in 59 of the 80 seats. The SP was ahead in six and BSP in 10. Although the BJP had won 71 seats in the last elections, the performance is much better than what many exit polls had forecast. The BJP state headquarters in Lucknow was drenched in saffron hue with jubilant party workers wearing saffron stoles, adorning 'genda' flowers around their necks and holding lotus cut outs. They also burst crackers and danced to drum beats as women supporters wore saffron attire and painted their nails in the same hue.

8. On the contrary, Congress, BSP and SP offices wore a forlorn look. The Congress Party was ahead only in one seat in Uttar Pradesh, and even Rahul Gandhi lost his seat in Amethi to BJP's Smriti Irani. He, however, won from Wayanad in Kerala by over 4 lakh votes.

9. The Modi wave not only swept through the Hindi heartland and Gujarat, but also rippled through West Bengal, Odisha, Maharashtra and Karnataka. Only Kerala, Tamil Nadu and Andhra Pradesh appeared untouched. In Telangana, where it was expected to fare poorly, the BJP was ahead in four seats. Andhra Pradesh, however, threw up a shock in the Assembly polls, voting out of power the Telugu Desam Party of Chandrababu Naidu, and electing Jagan Mohan Reddy's YSR Congress.

10. The results were staggering for BJP in the Hindi-speaking states, including those where Congress had won in the recent Assembly elections: in Madhya Pradesh, BJP was ahead in 28 out of 29 seats with a vote percentage of nearly 60; in Rajasthan it was leading in all but one of 25 seats; similarly in Chattisgarh, BJP was ahead in nine compared to Congress' 2 seats. The BJP is also expected to take all 10 seats in Haryana.

11. In Odisha, the BJP made huge gains, forging ahead in six of the 21 seats while the Biju Janata Dal was ahead in 15. In 2014, the BJD had won 20 seats and BJP took one. Odisha also held simultaneous Assembly polls, in which the BJD is set to return to power, indicating that the voters chose smartly, opting for the status quo in both state and centre. Notably, BJP and its ally Janata Dal (United) were ahead in 16 seats each in Bihar out of 40 at stake.