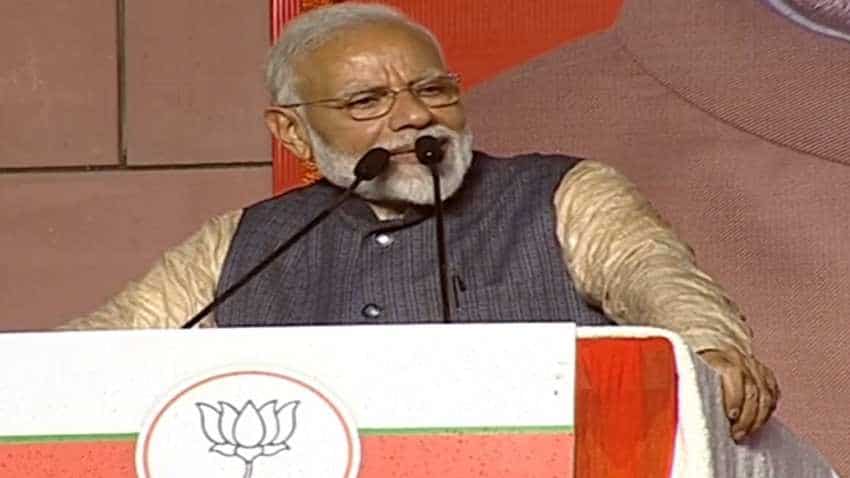 Taking a dig at the opposition parties, PM Modi said that those who had closed their eyes and ears, couldn't understand what he was saying but the people of India have proved him right. Source - BJP.

PM Modi said that the country had got freedom in 1947 but witnessed the maximum voting in this year's Lok Sabha election. He paid tribute to the families of all those who sacrificed their lives for democracy. "Since the country got Independence, so many elections took place, but the maximum voting took place in this election, & that too in 40-42 degree temperature," Modi said.

Taking a dig at the opposition parties, PM Modi said that those who had closed their eyes and ears, couldn't understand what he was saying but the people of India have proved him right.

He said, "I was busy today. So I couldn't pay attention to results. I don't have much information about it. But I was briefed by party president.I'll see it in detail. But from what he told me, that itself indicates that political pundits will have to change their 20th century thinking." PM Modi said that this is the 21st century and it is not a win for Modi but of the honest citizens who are chasing their aspirations. "This is a win of 21st century youth that has dreams," he said.

Addressing the party workers before PM Modi, BJP president Amit Shah said that he is proud that the party got more than 50 per cent votes in 17 states. "We had told party workers that they'll have to get on the field to fight the battle of 50%. I can proudly say that in 17 states, people blessed us with more than 50% votes...On the other hand Congress had to face a crushing defeat. In 17 states Congress got a 'big 0'," he said.

The prime minister retained his Varanasi seat by a margin of over 4.79 lakh votes. In a tweet, he said, the people of Kashi are "remarkable". "When I had gone to Kashi to file my nomination papers, they confidently said that they would manage the entire campaign without me having to come back even once. And manage they did! I bow to the citizens of Kashi. Looking forward to serving them," Modi said

He won the seat by a margin of 4,79,505 votes, defeating his nearest rival Shalini Yadav of Samajwadi Party, according to the Election Commission's website. In the 2014 elections, he had defeated Aam Admi Party (AAP) leader Arvind Kejriwal by a margin of 3,71,784 votes.