As per the Ministry of Health and Family Welfare, India recorded 9,419 new cases in the last 24 hours. Maharashtra's first patient of the Omicron variant discharged on Wednesday. 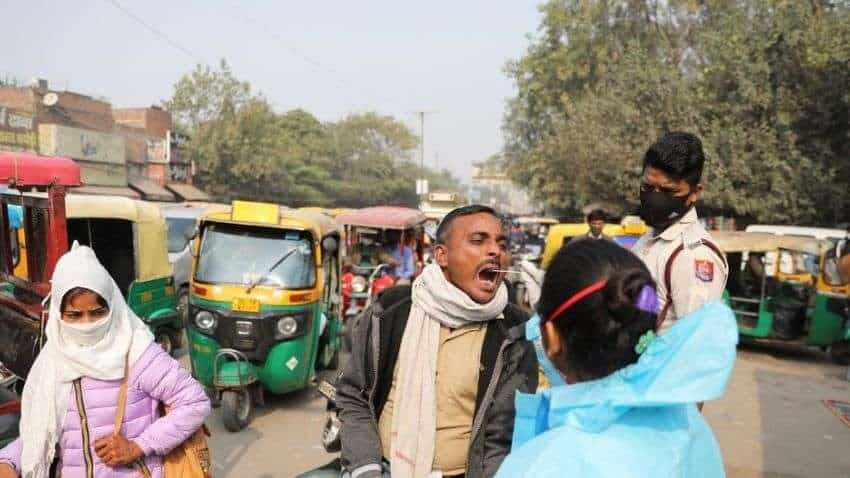 As per the Ministry of Health and Family Welfare, India recorded 9,419 new cases in the last 24 hours. Omicron, a new variant of SARS-CoV-2, has caught the attention of the government as the World Health Organisation (WHO) has termed it as a variant of concern. According to Manindra Agarwal, IIT scientist involved in the mathematical projection of trajectory of COVID-19, the third wave of coronavirus could hit the peak by February with cases likely to be reaching up to 1-1.5 lakh a day due to Omicron. However, it will be milder than the second wave, he told PTI.

“With the new variant, our current forecast is that the country could see the third wave by February but it will be milder than the second wave. So far, we have seen that the severity of Omicron is not like the one seen in the Delta variant,” PTI said in a report quoting Agarwal.

On Wednesday, according to a report by news agency IANS, a total of 37 Omicron variant suspects have been admitted to Delhi government-run Lok Nayak Jai Prakash Narayan hospital in the capital city so far. However, of the total, 28 persons have tested positive for Covid-19, as per IANS.

Here are the updates from India:

4.04 PM: As per an IANS report, the Centre on Thursday asked the states and Union Territories to maintain adequate buffer stock of the eight critical drugs identified for treatment of new Covid-19 variant Omicron.

The states have been asked to ensure that funds released by Centre under ECRP-II are being utilised for creating and strengthening health infrastructure, and 100 per cent matching funds are promptly released by states to the state health societies., as per IANS

"As the progress of the funds utilisation at the field level is being reviewed by the Health Ministry, information on progress of funds utilisation needs to be filled in the portal created for the purpose. It needs to be ensured that al health facilities at the field level have functional ventilators, PSA plants, oxygen concentrators etc", said health ministry in a review meeting with states.

Raising the issue of many ventilators supplied by the Centre lying unpacked and unused at some field hospitals, the Centre has asked the states to review immediately and ensure that all PSA oxygen plants, oxygen concentrators and ventilators are installed and functioning.

It has asked the five-fold strategy of Test-Track-Treat-Vaccinate-adherence to Covid Appropriate Behaviour (CAB) to maintain as the mainstay of public health response strategy for effective and timely control and management of Covid and its variants.

The states have also been advised to closely monitor the prevalence of influenza-like illness (ILI)/severe acute respiratory infection (SARI) and respiratory distress symptoms in view of winter season.

Health Secretary Rajesh Bhushan in the review meeting on Omicron urged the states and UTs to enhance testing and focus on surveillance to ensure early identification of the suspected cases for their prompt isolation and further clinical management. The districts reporting higher case positivity were alerted to monitor the case trajectory on a regular basis, and to promptly dispatch positive samples to the mapped INSACOG labs for whole genome sequencing.

Underscoring the critical importance of vaccination drive, states were also advised to continue increasing the pace and coverage of Covid-19 nationwide vaccination drive with focus on the ongoing `Har Ghar Dastak` campaign for ensuring full vaccination of all eligible population.

12.36 PM: The union territory of Puducherry logged 28 fresh coronavirus cases during the last 24 hours pushing the overall tally to 1,29,156, a senior official of the Department of Health told to PTI on Thursday.
A 78-year old woman from the Puducherry region succumbed to the virus taking the death toll to 1,877, Director of the Health Department G Sriramulu said in a release here.
The 28 new cases were identified at the end of the examination of 2,729 samples and were spread over Puducherry (21), Karaikal (2) and Mahe (5).
Yanam, an enclave of Puducherry in Andhra Pradesh, did not report any fresh case of infection during last 24 hours ending 10 AM Thursday.
The number of active cases stood at 241 which included 54 patients undergoing treatment in hospitals and the remaining 187 in home isolation, he said.
As many as 16 patients recovered and were discharged during the last 24 hours as the overall recoveries rose to 1,27,038.
He said the Health department has so far tested 20,03,939 samples and found 17,01,187 out of them to be negative.
The test positivity rate was 1.03 per cent while the fatality and recovery rates were 1.45 per cent and 98.36 per cent respectively.
The Health Department has so far administered 12,90,861 doses which comprised 7,88,676 first dose and remaining 5,02,185 second dose, the Director said.

12.16 PM: As per PTI, Mizoram's COVID-19 caseload mounted to 1,37,377 on Thursday with 320 new infections, while one more death pushed the toll to 509, a health department official said.
The latest fatality was reported from Saitual district, where a 99-year-old woman, who had been placed under home isolation, succumbed to the virus, he said.
The number of active cases now stands at 3,049, and 1,33,819 people have recovered from the disease so far, including 309 since Wednesday.
Mizoram has tested more than 14.56 lakh samples for COVID-19 till date.
According to State Immunisation Officer Lalzawmi, over 7.23 lakh people have been inoculated till Wednesday.

10.34 AM: As per PTI, Thane has reported 121 new cases of coronavirus, raising the infection count in the Maharashtra district to 5,70,177, an official said on Thursday.
These new cases were recorded on Wednesday, he said.
No new death due to the virus was reported in the district and the toll remained unchanged at 11,590, he said, adding that the COVID-19 mortality rate stood at 2.03 per cent.
In neighbouring Palghar district, the COVID-19 case count has gone up to 1,38,725, while the death toll stands at 3,302, another official said.

9.17 AM: 130.39 crore vaccine doses have been administered so far under Nationwide Vaccination Drive

8.45 AM:  As per a PTI report, Maharashtra's first patient of the Omicron variant of coronavirus, who resides in Thane district, was on Wednesday discharged from a hospital after testing negative for the infection, a civic official said.
The patient, a 33-year-old marine engineer from Kalyan Dombivli municipal area, had arrived at the Delhi airport from South Africa via Dubai in the last week of November.
He had boarded the flight from South Africa on November 24. On his arrival at the New Delhi airport his RT-PCR test was conducted. By the time he landed in Mumbai, he was informed by the Delhi airport authorities that he has tested positive for COVID-19.
The Maharashtra health authorities had then sent his swab samples for genome sequencing and the test report later confirmed that he was carrying the Omicron strain.
The man had joined his duty on a private ship in April this year and was on high seas since then. He has not yet taken any vaccine against COVID-19, officials said.
He had been admitted to a COVID Care Centre in Kalyan town, from where he was discharged at 6 pm on Wednesday, commissioner of the Kalyan Dombivli Municipal Corporation (KDMC) Dr Vijay Suryavanshi told reporters.
"He was discharged as he tested negative for the infection. As per the standard protocol, his two RT-PCR tests were conducted and both came out negative. He is perfectly all right now and there are no symptoms," he said, but he has been advised seven-day home isolation.
"Incidentally, it was his birthday today," the commissioner added.
The state has so far reported 10 cases of the Omicron variant.
According to the Centre, the countries designated as "at-risk" are European countries, including the UK, and South Africa, Brazil, Botswana, China, Mauritius, New Zealand, Zimbabwe, Singapore, Hong Kong and Israel.

The World Health Organization (WHO) has classified a new variant of SARS-CoV-2. It has been named as Omicron. The Technical Advisory Group on SARS-CoV-2 Virus Evolution (TAG-VE) is an independent group of experts that periodically monitors and evaluates the evolution of SARS-CoV-2 and assesses if specific mutations and combinations of mutations alter the behaviour of the virus, WHO has informed.

The B.1.1.529 variant was first reported to WHO from South Africa on 24th November 2021. The epidemiological situation in South Africa has been characterized by three distinct peaks in reported cases, the latest of which was predominantly the Delta variant.

Rupee falls 9 paise to 74.52 against US dollar in early trade