Before being taken to the public crematorium, his body was brought to the Bharatiya Janata Party (BJP) protest venue where party leaders paid their last respect. 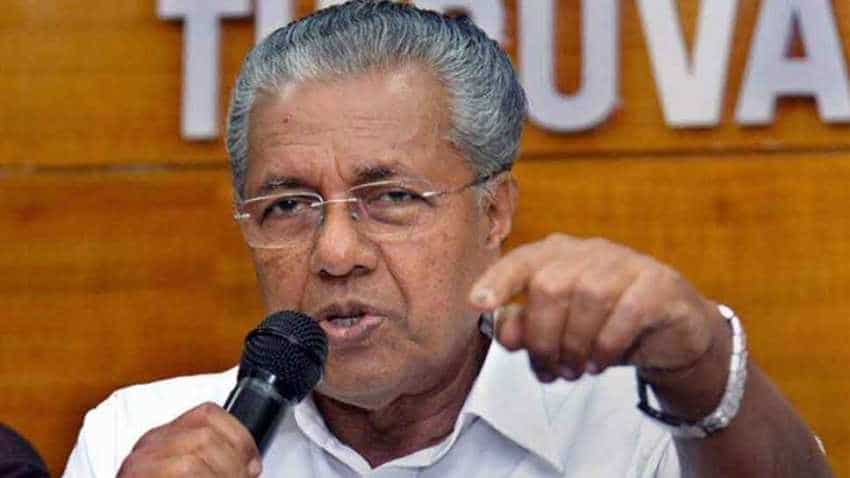 Chief Minister Pinarayi Vijayan told the media in Delhi that the BJP national leadership should reign in the state unit for organising protests like this, Image source: Zee News
Written By: IANS
RELATED NEWS

A dawn-to-dusk shutdown called by the BJP to protest against the death of a man said to be a Sabarimala devotee derailed Kerala on Friday, sparking widespread anger over the disruption to normal life.

The 50-year-old Venugopalan Nair set himself on fire at a BJP protest venue on Thursday and succumbed to his injuries in a hospital here. But in his dying declaration, he made no mention of the Sabarimala temple.

Before being taken to the public crematorium, his body was brought to the Bharatiya Janata Party (BJP) protest venue where party leaders paid their last respect.

But the rationale for calling the shutdown came under fire from the ruling CPI-M, Congress, business groups as well as the man on the street.

Chief Minister Pinarayi Vijayan told the media in Delhi that the BJP national leadership should reign in the state unit for organising protests like this.

"Frequent calls for shutdowns cause a lot of troubles to people... The cause of the death has also now come out," he said.

The capital district was subjected to one shutdown called by the BJP on Tuesday to protest "police high-handedness" on their women cadres when they protested over the Sabarimala issue in front of the state Secretariat on Monday.

State Congress President Mulapally Ramachandran asked the BJP to explain on why Friday`s shutdown was called when it was clear that Nair committed suicide as he was fed up with life.

"It`s most unfortunate that the BJP is trying make political capital out of a suicide. Their emotions on Sabarimala issue are hollow and has no merit," he said.

The state-run Kerala State Road Transport Corp (KSRTC) did not operate its services. In Palghat, some people stoned three buses parked at the KSRTC depot.

Most shops and business establishments besides all educational institutions in the state were closed but private vehicles plied.

Traders at the otherwise busy commercial market area in Kozhikode got together on Friday and decided that come what may they will not close down their shops in any shutdown in future.

"We have decided to take legal steps so that we will get police protection in future when shutdowns are called," said a trader.

A woman who arrived at the Kozhikode railway station on Friday morning with her from the state capital complained that she had gone to attend an interview and was now stuck till 6 p.m. as the bus to Wayanad would operate only after the shutdown ended.

The shutdown also affected the release of superstar Mohanlal`s magnum opus "Odiyan" that was slated to open at 412 theatres across the state.

In the state capital, police escorts were provided to the Indian Space Research Organisation (ISRO) buses and to vehicles carrying IT staff to the Technopark campus.

Former state BJP chief C.K. Padmanabhan, who has been on an indefinite fast over the Sabarimala issue, justified the shutdown.