It is not Modi's victory, but a win of people's hope and aspirations: PM

PM Modi reiterated that "Today there are only two castes in India- the poor and the other belongs to those who want to help the poor come out of poverty." 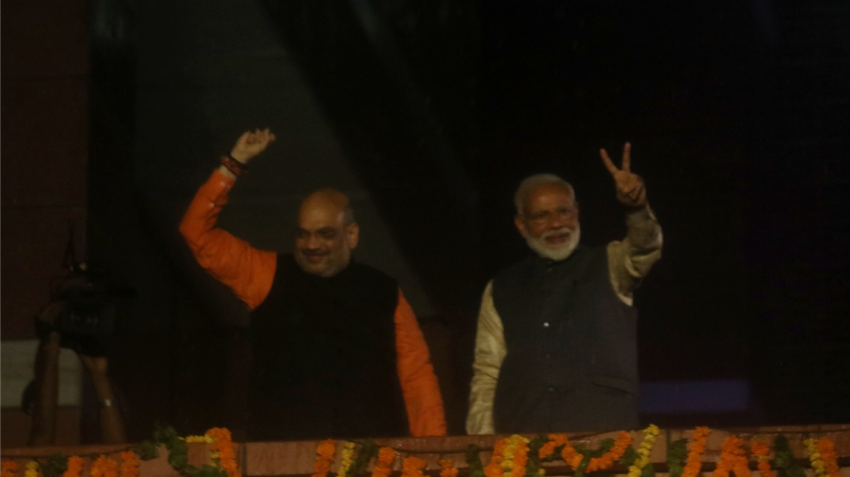 Prime Minister Narendra Modi addressing party workers at the BJP Headquarters today said "Aaj svayam Meghraja bhi is vijay utsav mein shareek hone ke liye hamare beech hain (today rain god himself has come between us to mark our victory). He added, "Since the country got independence, so many elections took place, but the maximum voting took place in this election, and that too in 40-42 degree temperature."

Expressing gratitude to 130 crore people of the country, he said that they have once again fulfilled the desire of this hermit (himself) ..Aaj desh ke koti-koti nagrikon ne iss fakir ki jholi ko bhar diya hai. Main Bharat ke 130 crore nagrikon ka sar jhuka kar ke naman karta hoon). The prime minister said, "If someone has won, it's Hindustan that has won, it's democracy that has won, it's public that has won, and therefore, I dedicate this to public, all BJP and NDA people with humility." "I congratulate all the winners, no matter from which party or which region they contested," he said, adding "It is not Modi's victory, but a win of people's hope and aspirations."

According to him, "Since I was busy today, I couldn't pay attention to results. I don't have much information about it, but I was briefed by party president," adding "But from what he told me that indicates that political pundits will have to change their 20th century thinking."

PM Modi reiterated that "Today there are only two castes in India- the poor and the other belongs to those who want to help the poor come out of poverty."

Welcoming Prime Minister Narendra Modi, BJP president Amit Shah said “This is a victory for the BJP’s government which worked on ‘sabka saath sabka vikas’ from 2014-2019.” Shah thanked the party workers for their support, saying it was reflection of their hard work and dedication. He said, "this is a historic victory. After 50 years someone has won an absolute majority for the second time in a row."

On party's victory in West Wengal, he said, "Even after so much violence and rigging, BJP won 18 seats in West Bengal. It tells that in coming days, BJP will establish its might in West Bengal."

He also gave piece of advice to TDP chief Chandrababu Naidu, who nlt only lost assembly polls in Andhra Pradesh but also bite dust in the Lok Sabha election, Shah added, "...I would like to tell Chandrababu Naidu ji, had he worked so hard to get votes then TDP's account would have opened."

According to Shah, "We had told party workers that they'll have to get on the field to fight the battle of 50%. I can proudly say that in 17 states, people blessed us with more than 50% votes...On the other hand Congress had to face a crushing defeat. In 17 states Congress got a 'big 0'."

Earlier, the Prime Minister was accorded a grand welcome at the BJP headquarters. BJP chief Amit Shah greeted Modi on his arrival following which hundreds of BJP workers showered rose petals on the two leaders. PM Modi acknowleded the warm welcome accorded to him, flashing victory sign that evoked huge cheers from the crowd. Notably, members of BJP Parliamentary Board including a number of union ministers were present on the occasion.