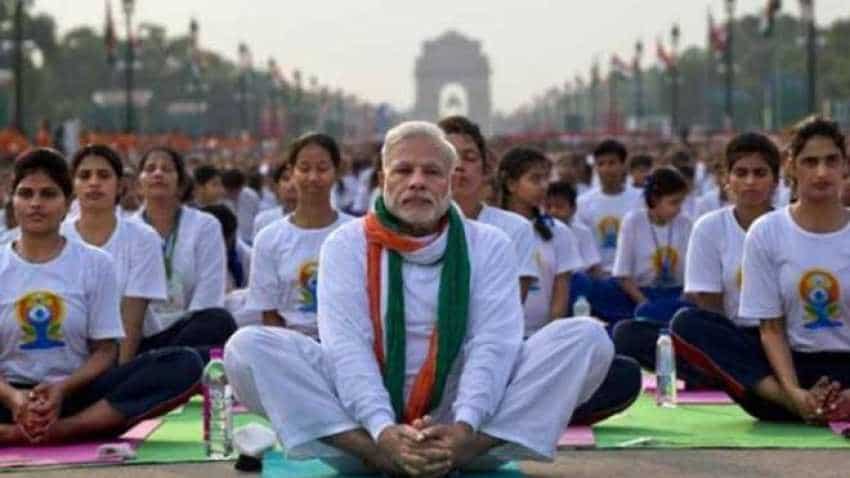 The first International Yoga Day celebration was organised at Rajpath in New Delhi on June 21, 2015.

International Yoga Day 2019: Prime Minister Narendra Modi's office (PMO) has picked Ranchi as the venue to host the main event of International Yoga Day on June 21 this year. PM Modi will also attend the event, news agency PTI reported official sources as saying today. This will be the government's first mega public event after Modi became prime minister for a second term on May 30. As many as five cities - Delhi, Shimla, Mysore, Ahmedabad and Ranchi - were shortlisted by the Ayush ministry for hosting the main even and sent to the Prime Minister's Office (PMO) for final selection.

The official source said, "The PMO finalised Ranchi as the venue for the main function of International Yoga Day to be held on June 21." A senior AYUSH ministry official was quoted as saying, "We have already started the preparations and the event will be organised on a large scale."

Ahead of the main event, a two-day yoga Mahotsav is being organised in Delhi by the Morarji Desai National Institute of Yoga from Saturday. About 10,000 people, including yoga teachers, professionals, enthusiasts among others are expected to attend the event which was inaugurated on Saturday.

Last year, the main event of International Day of Yoga was held at the ground of Forest Research Institute, Dehradun, in which Prime Minister Narendra Modi participated. The first International Yoga Day celebration was organised at Rajpath in New Delhi on June 21, 2015. In 2016, the main function was held in Chandigarh and in 2017 it was held in Lucknow.

A study has found that practising yoga can boost muscle strength and balance in older adults as well as improve mental wellbeing. Reviewed 22 studies that investigated the effects of yoga on physical and mental wellbeing in the older adult, researchers at the University of Edinburgh in the UK made the conclusion. "Based on this study, we can conclude that yoga has great potential to improve important physical and psychological outcomes in older adults. Yoga is a gentle activity that can be modified to suit those with age-related conditions and diseases," Divya Sivaramakrishnan, from the University of Edinburgh, said in a statement.